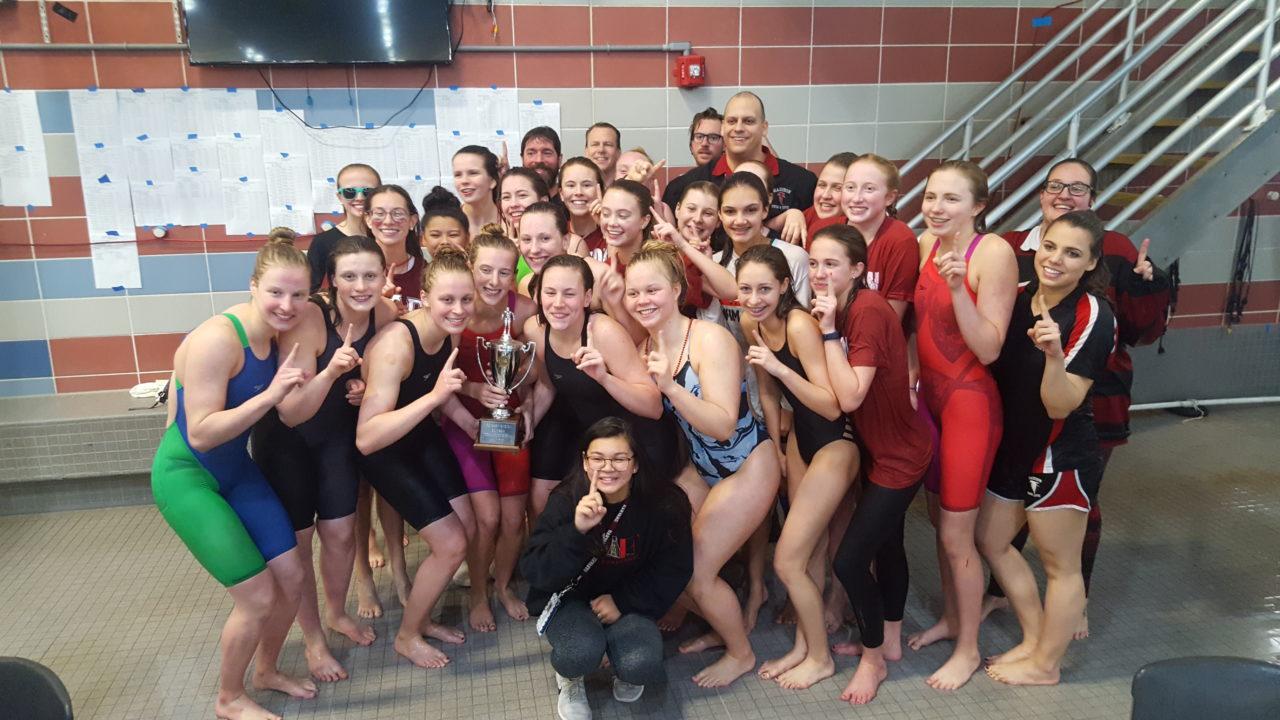 For years, Northern Virginia has been a hotbed of elite high school swimming, and the atmospherics at the 6A Northern Region championship meet – typically held before a capacity crowd at the Oak Marr Rec Center – often lead to some of the fastest prep times in the country. Current photo via Matt Rees

For years, Northern Virginia has been a hotbed of elite high school swimming, and the atmospherics at the 6A Northern Region championship meet – typically held before a capacity crowd at the Oak Marr Rec Center – often lead to some of the fastest prep times in the country. Colleges have taken notice, and many Division 1 rosters include swimmers who competed at the meet in the past few years: Aaron Boyd, Laura Branton, Megan Byrnes, Jacqueline Clabeaux, Suzanne Dolan, Christian Ginieczki, Tommy Hallock, Janet Hu, James Jones, Emily Meilus, James Murphy, Sam Pomajevich, John Shebat, and Lane Stone, just to name a few.

The latest proof of Northern Virginia’s eminence came during Saturday night’s 6A Northern Region championship meet. Multiple swimmers went under the “automatic All-American” thresholds – many of them are seniors who have already committed to Division 1 schools. But there many other eye-popping times delivered by juniors, sophomores, and even a few notable freshmen.

But high school swimming is not just about individual performances, and one team stood out from the rest on Saturday dnight: James Madison, of Vienna. The Warhawks proved dominant, with the girls winning by 90 points over Oakton, while the boys finished six points of head of Langley, in McLean.

While depth played a key role for Madison, the girls received a huge boost from sophomore Anna Keating. She won the 100 breast in meet record time (1:01.38), building on the adrenalin delivered in the Flo Rida walk-out song “My House.” She was also part of two winning relays – the 200 medley (1:44.13) and the 200 free (1:35.63 – missing the meet record by .01). And in one of the most exciting races of the night, she tied Yorktown’s standout freshman Victoria Huske in the 200 IM. The dynamic duo had a see-saw battle, with Huske leading by more than four seconds after back, only to have Keating slice the margin to about 1.5 seconds after breast and then make up the rest in free, bringing the capacity crowd to its feet.

There were also four triple winners:

Anthony Grimm, a precocious freshman at Oakton, was the breakout swimmer of the night. He reeled off victories in the 100 fly (49.24) and the 100 back (48.90), and led off Oakton’s winning 200 medley relay with a blazing fast 22.16 backstroke leg. Local fans are already excited about getting to watch him, and Huske, for the next three years. See his post-meet interview with SwimSwam here.

Virtually all of these swimmers will be squaring off again at the state meet, being held at George Mason University on February 17. And with so many standout swimmers returning next year and beyond, the 6A region meet will continue to be a “can’t miss” event for dedicated swim fans.

It’s worth noting that the Northern Region Meet used to have essentially ALL of the teams in northern VA. Because the vast majority of 6A-size schools are in that part of the state, the Northern Region was sometimes a faster meet than the subsequent state meet. This year the schools in northern VA were split into two separate regions — with a good chunk of the schools now in the Occoquan Region (Robinson, Woodson, West Springfield, Lake Braddock, West Potomac among them). As a result, the “Norther Region” meet is still very fast, but it’s a very different meet than it was last year. It should make for a more interesting VA state meet in 2 weeks.