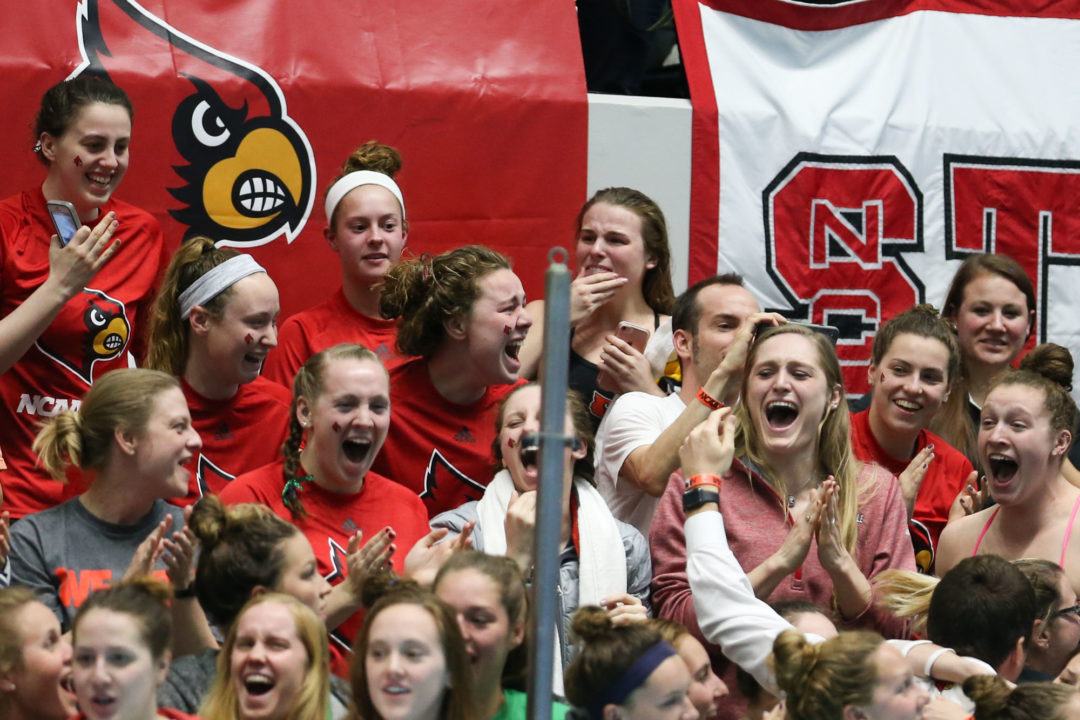 Most, but not all, of Louisville's twelve nation-leading times were done at the SMU Classic. Current photo via Tim Binning/TheSwimPictures.com

Thanks largely, but not entirely, to suited swims from the SMU Classic earlier last month, the Louisville women still lead all NCAA Division I teams with ten nation-leading times after the first week in November.

On one hand, it’s a little early in the season to be worrying too much about who’s been the fastest, especially when there’s really no way of knowing just how rested any particular team was for any particular meet, and we know that some of these swims were done with fast suits. But, at the very least, with only a couple weeks until teams start their mid-season invites, the chart below provided a quick snapshot of where the rankings stand currently.

Top Times, NCAA Division I (As of November 5th)

Note: Bacarizo’s time, although listed in the NCAA database, is a converted LCM time from the Youth Olympics.  The fastest non-converted time is a 1:42.94, which USC’s Patrick Mulcare swam at the Trojan Invite early last month.

While swimming fast early in the season can’t really be bad, it’s not always clear what to make of the early season leaders.

As we said, some of the times above were done at invites like the SMU Classic or the Trojan Invite, where many, if not all swimmers were suited up. As far we know, most of Louisville’s and USC’s top times were done at one of those two meets, with Louisville’s 1650s and Zach Harting‘s 100 fly time being exceptions.

Other times came during unsuited swims at dual meets from swimmers/teams that we know tend to be pretty good in-season, and back it up come NCAAs.  It’s certainly not surprising to see reigning NCAA champ Coleman Stewart with the fastest time in the 100 back so far. Nor it is surprising that Cal freshman Reece Whitley, one of the best high school breaststrokers ever, already has the fastest time in the 200 breast.

Some events, such as the 1650 or the 800 free relay, simply haven’t been swum all that much, and we’ll most likely some drastic drops in the top times at the upcoming mid-seasons invites.

Then you have the times that could be harbingers of things to come, like Maggie MacNeil‘s 51.49 in the 100 fly, a time which has very quickly put the Michigan freshman into the discussion of the top butterfliers in the country, in her first season in swimming yards after coming down from Canada.

We won’t really know until March how useful these times were in predicting results in NCAAs, but in the meantime, enjoy the speculation.

So what? They’re one of the only teams to have swum a meet on tech suits….