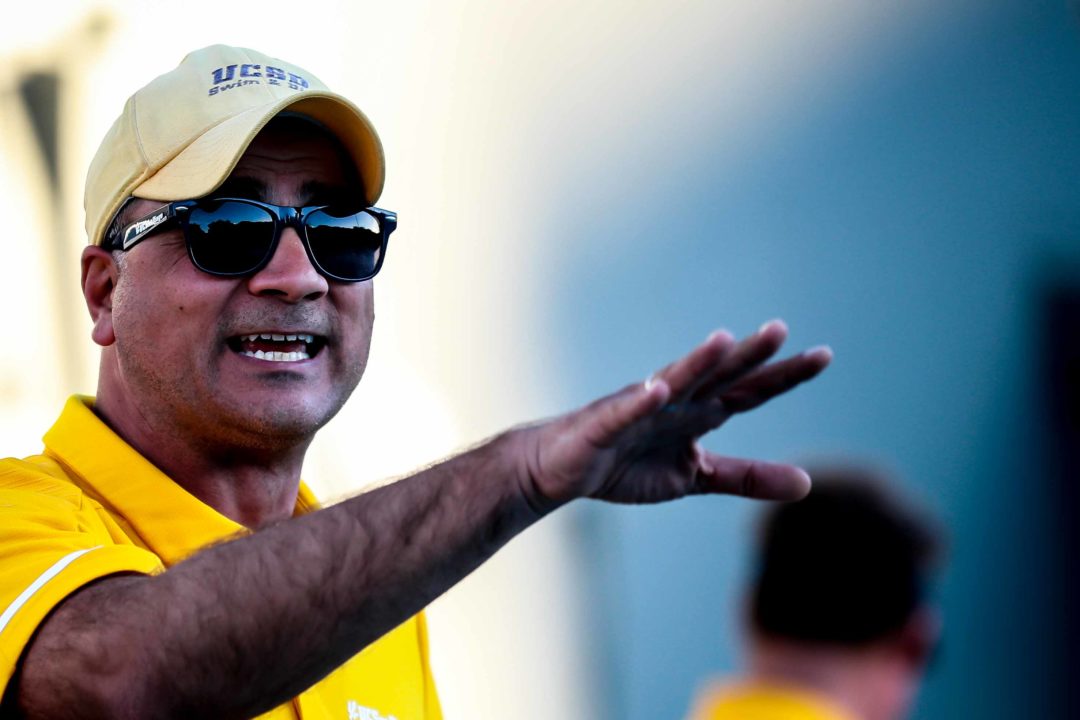 Djordjevic, also an Olympic coach for his native Serbia, was associate head coach at UCSD for five seasons prior to this appointment. Archive photo via Jack Spitser/Spitser Photography

“I am extremely thankful and humble to become the Head Coach of UC San Diego,” he said.  “Moving into my seventh year with the program, I am excited to continue the trajectory of success that has been planned together with Coach Marsh and continue to make a successful transition from Division II to Division I and create another great collegiate swimming and diving program in San Diego. I want to thank the UC San Diego Athletics Department and Athletic Director Earl Edwards, but especially the team for overcoming adversity and being gracious and steady in this coaching transition. The athletes are ready to take all the positives and use them as catalysts to propel the team forward in the coming years.”

Marsh was only with UC San Diego for a little over two years – he took the job in the summer of 2017. The school will begin transitioning NCAA divisions in the 2020-2021 year, which will leave them ineligible for NCAA Championship participation. The men finished 10th and the women finished sixth at the 2019 NCAA Division II Championships in 2019. That was the men’s highest finish since the 2013-2014 season, while the women placed third as recently as four years ago (and have placed in the top-10 in all but one season since NCAA swimming began in the 1981-1982 season).

Djordjevic was a volunteer assistant during the 2013-14 campaign prior to being named the top assistant, and under his watch, the Tritons have combined to post six top-seven team finishes at the NCAA Division II Championships. In Djordjevic’s five seasons as associate head coach, UCSD has produced two individual national champions, well over 100 All-America accolades and honorable mentions, and nearly 100 PCSC individual champions. Djordjevic also served under Marsh’s predecessor Daniel Perdew, who was interim head coach for two seasons, and Matt Macedo, who left for UC Santa Barbara in 2014.

Prior to entering the collegiate scene, Djordjevic coached at San Diego club programs North Coast Aquatics and Pacific Swim, and held numerous posts at the international level, primarily for his native Serbia. He was a Serbian National Team and Olympic coach from 2004 to 2009 before permanently moving to the United States, and was one of 2008 200 free silver medalist Sara Isacovic‘s coaches.

Congratulations, Marko! So happy for you and the UCSD swimmers and divers! They couldn’t have made a better choice. The program is in excellent hands.

Congrats, Marko! Excited to see what new heights you will continue to reach now being Head of the swimming program. Well Deserved!!

Congratulations Marko! Happy for you and the UCSD swimmers. Well deserved

You got something wrong there. Sara was coached by her coach in Slovenia, Miha, who coached here before she went to US. I don’t know after Beijing Olympics. Any way good luck to Marko.

Great hire, Marko has pretty much been running the show since Marsh arrived. Very energetic coach and loved by all his swimmers!

Coach Marko is the best! We are lucky in the San Diego area to have him. He is incredibly knowledgeable and hard-working and personable and caring and funny and a superb influence on all his swimmers. Everybody kmows how much he cares. Bravo move!

Very glad to hear this. Marko is a great coach and has put in a ton of work, without nearly enough recognition the last few years.