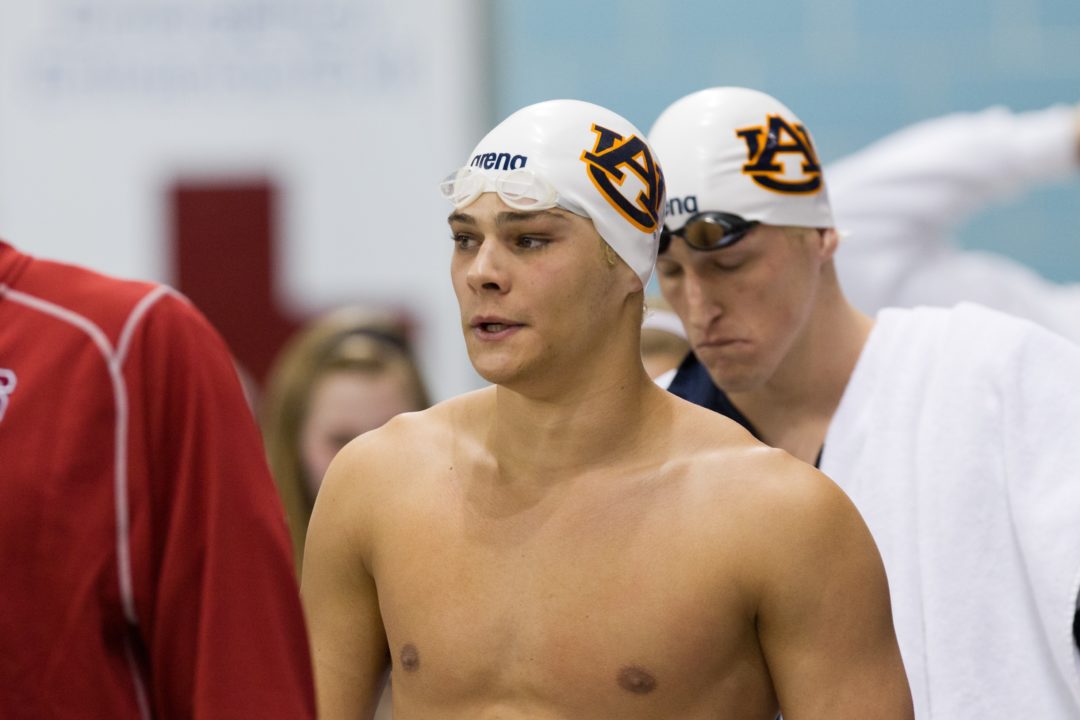 Marcelo Chierighini and the Auburn Tigers look to get out to a hot start on night one of the 2014 SEC Championships Current photo via Tim Binning/TheSwimPictures.com

Follow along live with us as we kick off the major Division I conference season with night 1 of the 2014 SEC Championships.  On the men’s side, the Auburn Tigers will look to get out to a quick start with multiple high-scoring divers and a potential win in the 200 medley, while the Florida Gators aim to make a statement in the 800 freestyle relay.  For the women, while Georgia is a heavy favorite in the 800 free relay, three or four teams will battle it out in the 200 medley relay.  The Bulldogs, behind defending champion Laura Ryan, and the Volunteers should score some big early points in the women’s 3 meter diving event.

This went about as well as it could have for Georgia in their quest for their fifth straight SEC championship.  Teammates Ann-Perry Blank and Laura Ryan finished first and third, respectively, giving the Bulldogs 59 early points (remember, the SEC scores to 24 places).  Blank, who finished just 17th last season as a junior at this meet, finished with a final score of 325.50, while defending-champion Ryan settled for third in 320.50.  Splitting the two was Missouri sophomore Lauren Reedy with a final score of 322.50.

What a difference a year (… and having the fastest incoming freshman sprint backstroker in the country) can make.  Behind a sizzling 23.78 leadoff leg from freshman Olivia Smoliga, the Georgia Bulldogs took the opening swim event of the meet with a nation-leading time of 1:35.52, which would have put them second at NCAA’s a year ago.  For comparion’s sake, last year at this meet, Georgia finished seventh in just 1:37.90.

The split breakdown is below.  Apart from Smoliga, the biggest difference-maker here was Melanie Margalis, the Bulldogs’ go-to breaststroker who has improved dramatically over the past 8-12 months.

The defending SEC and NCAA champion Tennessee Volunteers were just behind Georgia, with Faith Johnson turning in the fastest anchor leg in the event (21.35), finishing in a final time of 1:35.81.  After falling behind in the opening two legs, Ellese Zalewski (22.92 – fastest in the final heat) and Natalie Hinds put the Florida Gators in third place position, touching in 1:36.20.  Despite a 26.28 second leg from Breeja Larson, Texas A&M ended up in fourth in 1:36.40.

Two things not to get lost in the shuffle:

Well… We certainly didn’t this one coming, either.

After finishing third at SEC’s and 13th at NCAA’s a year ago, the Florida Gators overcame a huge deficit to win the men’s 200 medley relay, with an 18.52 anchor leg from Brad deBorde to stop the clock at 1:24.53.  The Gators fell into a hole early after Tennessee shot out in front behind a 21.22 leadoff leg from Sam Rairden.  Renato Pronto and Oystein Hetland held the lead for the Volunteers, while five other teams in the field jockeyed for position.  Despite a very respectable 19.17 anchor leg, Luke Percy couldn’t hold off the field, settling for a T-3rd place finish in 1:24.84.

Potentially even more shocking?  The other teams towards the top of the podium were Georgia and Alabama, thanks to great front-halves of their relays, with Nic Fink (Georgia, 23.37) and Anton McKee (Alabama, 23.38) recording the fastest breaststroke splits in the field.  Up until the last ten yards, it looked like a three-team race between Tennessee, Georgia, and Alabama before deBorde shot past them for the win.  Georgia finished in 1:24.73, and Alabama touched in a school record 1:24.84.

Unlike the Georgia women, there was no significant addition that drastically improved the Gator medley, just flat-out improvement over the last twelve months, particularly over the last two legs.:

The win gives Florida an early lead, but that is likely to be relinquished in the men’s 3m springboard, where the Auburn Tigers have four divers who will score in the top ten.

Ford McLiney captured the first men’s SEC swimming or diving title in Texas A&M history with a six-dive score of 424.95 points.  Tennessee sophomore Mauricio Robles was just behind with 418.10 points, while defending champion David Bonuchi of Missouri settled for third with 416.45 points.

No Schmitt?  No Romano?  No problem.  Georgia easily defended their SEC title in the women’s 800 free relay, with the quartet of Shannon Vreeland, Amber McDermott, Melanie Margalis, and Brittany MacLean crushing the field to clock in at 6:53.04, one of the five fastest times in the history of the event.  It’s not particularly a shock that the Bulldogs ran away with this relay; despite the graduation of their two best 200 freestylers, this remained the undisputed best mid-distance freestyle group in the country.

Sarah Henry came through on a big 1:43.42 final leg for Texas A&M, leading the Aggies to a second place finish in a school record time of 6:58.80.  Elizabeth Beisel put the Gators in a solid second place position at the 400 mark with a 1:42.81, but Kelli Benjamin gained ground over the third 200, setting Henry up to quickly take control.  Florida settled for third in 7:00.05.  Tennessee, who was fourth in 7:03.70, also was under the NCAA ‘A’ standard.

The Georgia women will leave this session with the lead and a clear mental advantage on the field, showing that their biggest weakness from last year (their 200 medley relay) is now a strength.

The Florida men took their second relay of the night, running away with the 800 freestyle relay to set a new SEC meet record in 6:13.03.  While their 200 medley win was a little shocking, this race belonged to the Gators almost immediately after the horn went off.  After Corey Main, a swimmer not typically known for his 200 ability, crushed his lifetime best by 2.5 seconds to lead off 1:34.06, Sebastian Rousseau put the race completely out of reach with a 1:31.81 second 200.  Cieslak (1:34.34) and Dan Wallace (1:32.82) finished things off for the Gators.

At this point, the Gators look to be in a great position to defend their title at NCAA’s:

Freshman Kyle Darmody swam a career best 1:33.71 third leg to safely put Auburn in second place position, as the showed some range to finish second in 6:17.36, nearly five seconds faster than they were at this meet last season.  This has been Auburn’s worst relay for more than a decade, and their ability to put together a top eight relay could make the difference between overall team places next month.

Are they streaming prelims?

Solomon Grundy – we’ve been told probably not. But it’s worth checking the same link, just in case.

Saw the fine print, streaming finals only, which is when practice is! D’OH

I’m always very happy when Miss Smoliga swims fast.
She’s ready for a big end of season.
Too bad the list of smileys available for swimswam is very short. Otherwise I would have posted a love smiley. 😆

Advantage or disadvantage to be SEC swimming a week earlier than say the Big 10. Is it better to have a longer period and build up after taper, or a shorter period and try to hold a taper? I’m curious for your thoughts.