LIMITLESS THE POWER OF HOPE AND RESILIENCE TO OVERCOME CIRCUMSTANCE 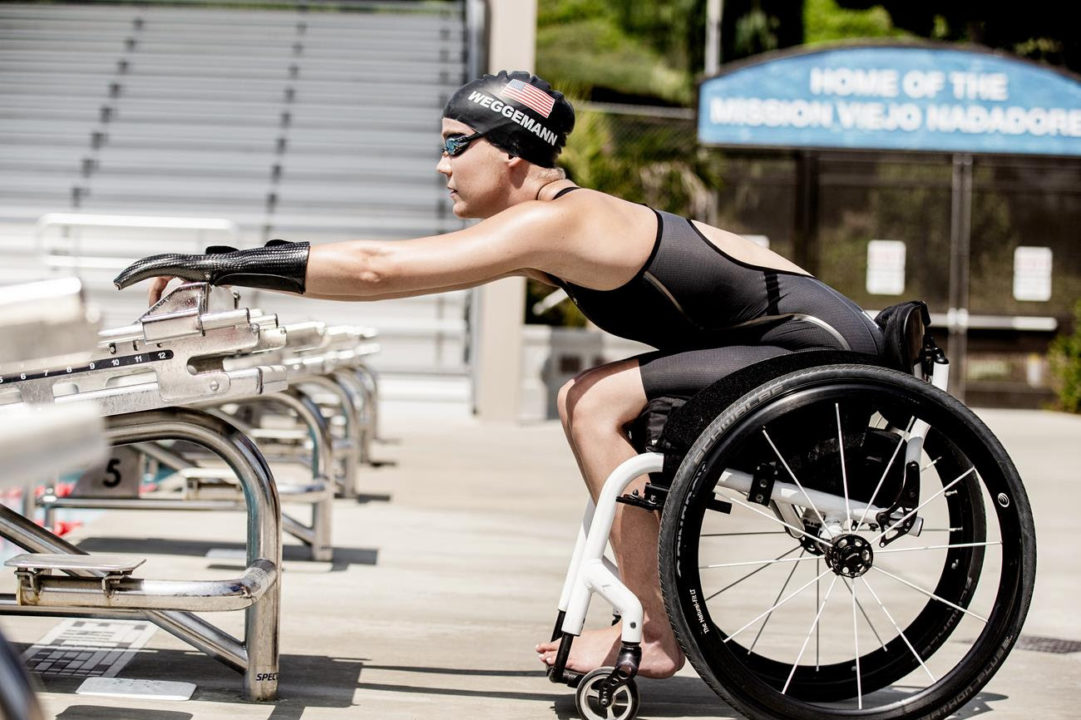 Paralympic Gold-Medalist and 15-Time World Champion Mallory Weggemann uses her story to help others to meet their challenges. Current photo via FINIS

In 2008, while attending her freshman year in college, the world changed for Mallory Weggemann when a routine medical procedure left the Minnesota teen paralyzed from the waist down. With the support of her family, community and friends, Mallory began her recovery and returned to competitive swimming. In less than two years, the former co-captain of her high school swim team had broken eight world records, and by the 2012 Paralympic Games, Mallory held fifteen world records and thirty-four American records. A short time after becoming a gold and bronze medalist at the London Paralympic Games, a devastating fall severely damaged her left arm, yet Mallory refused to give up and Mallory represented Team USA at the 2016 Rio Paralympic Games. After two reconstructive surgeries and extended rehab, Mallory won two gold medals and a silver at the 2019 World Para Swimming Championships. And perhaps most significantly, she found confidence, independence, and persevering love as she walked down the aisle on her wedding day.

This March 2, Mallory will tell her inspirational story in a book, Limitless: The Power of Hope and Resilience to Overcome Circumstance (Nelson Books), in which Mallory shares her life story and the lessons she learned by pushing past every obstacle, expectation, and limitation that stood in her way. Readers will learn how Mallory’s extraordinary resilience and uncompromising commitment to excellence are rooted in her resolve, perseverance and sheer grit.

“Swimming opened up a new life for me—it allowed me to imagine the possibilities rather than focusing on the limitations,” she says. “I don’t like to say that swimming allowed me to move on, because I can never move on from my paralysis; it will always be a part of me. I prefer to say that swimming helped me find a way forward—to build a new reality limited only by my own decisions, resolutions, and mindset.”

Readers will discover how, like Mallory, they too can choose to rewrite their own stories to overcome the challenges they face, something that is especially relevant, given the global pandemic that has greatly affected us all.

“We all must face the depths of heartbreak, navigate through loss and uncertainty, regardless of how painful it might be in the moment,” she adds. “This is a necessity for becoming who we are meant to be. Your world may never return to what it was prior to your sudden moment of impact, and your life might be forever changed—but maybe, just maybe, it is this very hardship that will carry you forward beyond anything that you dared dream possible.”

Mallory Weggemann‘s remarkable story reminds us that whatever circumstances we face, we have the capacity to face down whatever challenges, labels, or difficulties confront us–and to do so on our own terms.

Limitless will be available on March 2, wherever books are sold.

ABOUT THE AUTHOR:  Mallory Weggemann is a record-setting, two-time Paralympic swimmer for Team USA. She has set fifteen world records and thirty-four American records, and is also the recipient of an ESPY Award, a 15-time World Champion, and a Paralympic gold and bronze medalist. Weggemann has also served as a commentator on NBC for the PyeongChang 2018 Paralympic Games, the first female reporter in a wheelchair ever to serve in that capacity. Weggemann has established herself as a leader outside of the pool, as well; she is an inclusion advocate serving on the Advisory Board of Disability for Delta Air Lines as well as a cofounder and co-CEO of TFA Group, a social impact agency and production studio. A highly sought-after motivational speaker, Weggemann has presented at numerous Fortune 500 companies, including Bank of America, Morgan Stanley, Comcast, PepsiCo, Northwestern Mutual, Aetna, Accenture, and Delta Air Lines.