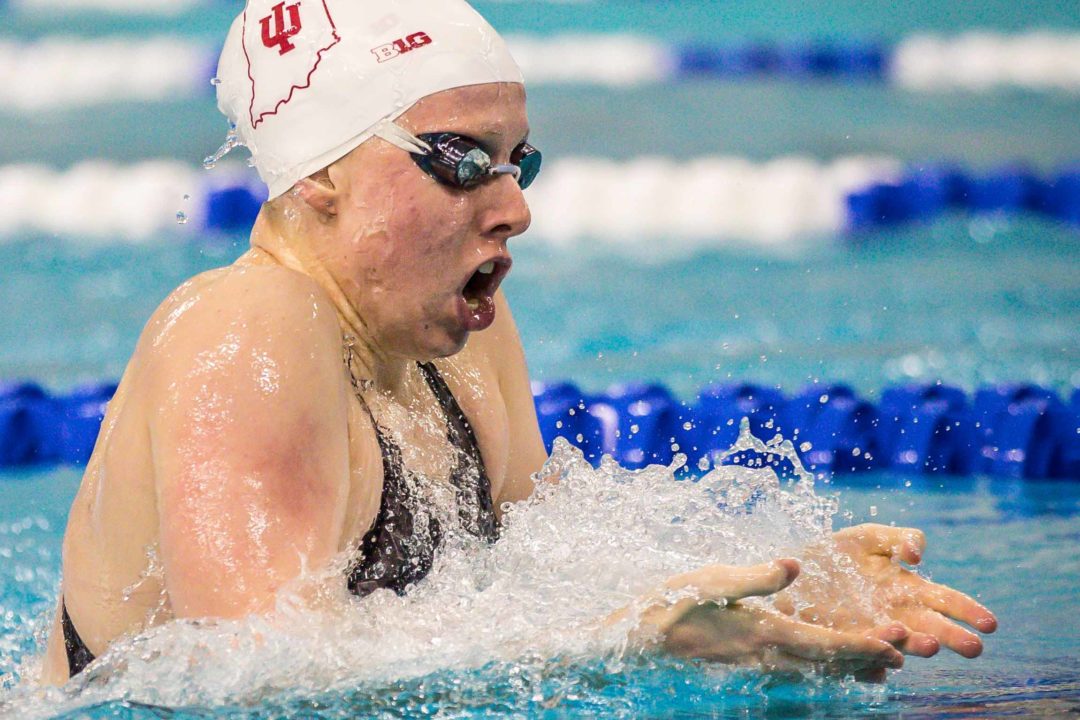 Indiana breaststrokers had themselves a night in their home pool. Archive photo via Jack Spitser/Spitser Photography

Is there such a thing as “taper by osmosis”?

While American swimmer Lilly King was not named in Cody Miller’s latest vlog post specifically as a part of the group of breaststrokers that were doing a taper workout (she did tongue-in-cheek confirm in the comments that she has never tapered), her time in the 100 breaststroke final roared her to the top of the World Rankings.

Lazor herself is worthy of extra  mention as she continues her meteoric rise. That swim was a new career-best (she was part of Cody Miller’s taper workout), undercutting the 1:06.66 that she swam in Des Moines. Lately, she’s swimming lifetime bests at every meet (literally – evidence) on an almost-terrifying improvement curve. After no best times in the 100, for example, in 2017 or 2018, she’s undercut her previous PB on 8 occasions in 2019 in the 100 breaststroke in long course. In total, that’s amounted to a 1.83 second improvement this year alone in this event.

This women’s 100 breaststroke was full of novelty performances. Besides the rarity of a three-way tie for 3rd place in 1:07.59 for Emily Escobedo, Madisyn Cox, and Bethany Galat, both Escobedo and Cox swam lifetime bests by a full second.

The American women’s breaststroking group, which for a few years had a steep dropoff in depth, is suddenly looking like an American strength with Tokyo approaching.

I doubt she was part of “Cody Miller’s taper workout”. He should be focusing on swimming….

I would have to disagree, he’s doing something utterly fantastic for this sport and is a brilliant role model for all swimmers.

Brilliance from IU, Ray Looze must be doing something special down there. Wow