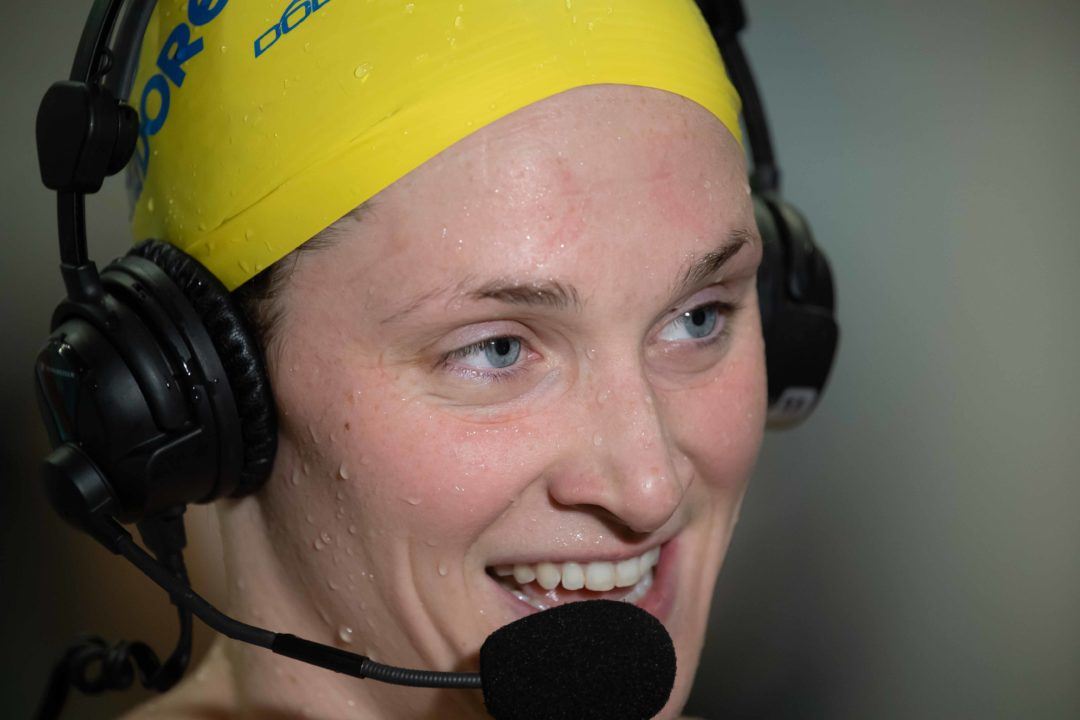 Swimming is fun when you hit lifetime bests at every meet. Archive photo via Mike Lewis/Ola Vista Photography

Annie Lazor, after swimming a lifetime best of 2:22.99 at the Pro Swim Series in Des Moines, Iowa last week, is now the world’s leader this season in the 200 long course meter breaststroke.

And lest you think that Lazor was ‘going for broke’ at this meet and this was a once-in-a-season swim: she also swam a lifetime best in Knoxville of 2:23.51. In her last long course meet before that, Summer Nationals, she hit a lifetime best of 2:24.42, and in her last short course meters meek, Short Course Worlds, she also hit a best time of 2:18.99. That means that she’s hit lifetime bests in the 200 breaststroke at 4 consecutive meets. Swimming is fun when you hit a lifetime best at every meet.

Lazor came out of high school with national-caliber accolades already to her name. At  the 2012 Olympic Trials, when she was just 17, Lazor qualified for the semi-finals in the 200 breast, ultimately finishing 15th in a 2:31.20.

It’s not so much that Lazor ‘came out of nowhere,’ or that she had a massive plateau in college. It’s just more along the lines of her steadily improving and pushing through after college, and joining the right team, Indiana, to get her to the serious international-caliber times that she’s now hitting.

The best comparison to demonstrate her improvement chart comes by lining her up against two swimmers with whom she has training connections. One is Indiana’s Lilly King, who is younger than Lazor but also trains at Indiana (where Lazor currently trains); the other is Micah Sumrall, who’s recently revived her career and was the United States’ fastest 200 LCM breaststroker last season, and also attended college at Auburn.

All 3 swimmers were very good high school breaststrokers, and they all had almost exactly the same time at age 17. King’s improvement has come in fits-and-spurts, with the biggest drop coming in her first season at Indiana. Sumrall also had most of her drops in chunks, in between a few plateaus, though at a later age than King. But Lazor just sort of skates in between them, with a long-term steady improvement (the flat-line for her is that she never actually swam the race at age 22, which smooths the line in that portion of the chart).

And now, an event that for a long time in American swimming has had one star sitting on her own platform (going back to Rebecca Soni) is suddenly becoming very crowded and deep at the top. Aside from the 3 mentioned above, there is Bethany Galat, Melanie Margalis, and Emily Escobedo capable of 2:23s, with a group of teenagers already knocking at the door of 2:25. One of them really needs a World or Olympic medal to grab the ‘star’ spot, but having a group like that able to push each other to compete at big meets will go a long way for Team USA as Tokyo 2020 approaches.

Was just going to post the same thing. I hope I am swimming that fast when I am 150 years old!

Well an article in SwimSwam is all but guaranteed to jinx this run, but it is very cool. It’s especially impressive because she is already FAST!