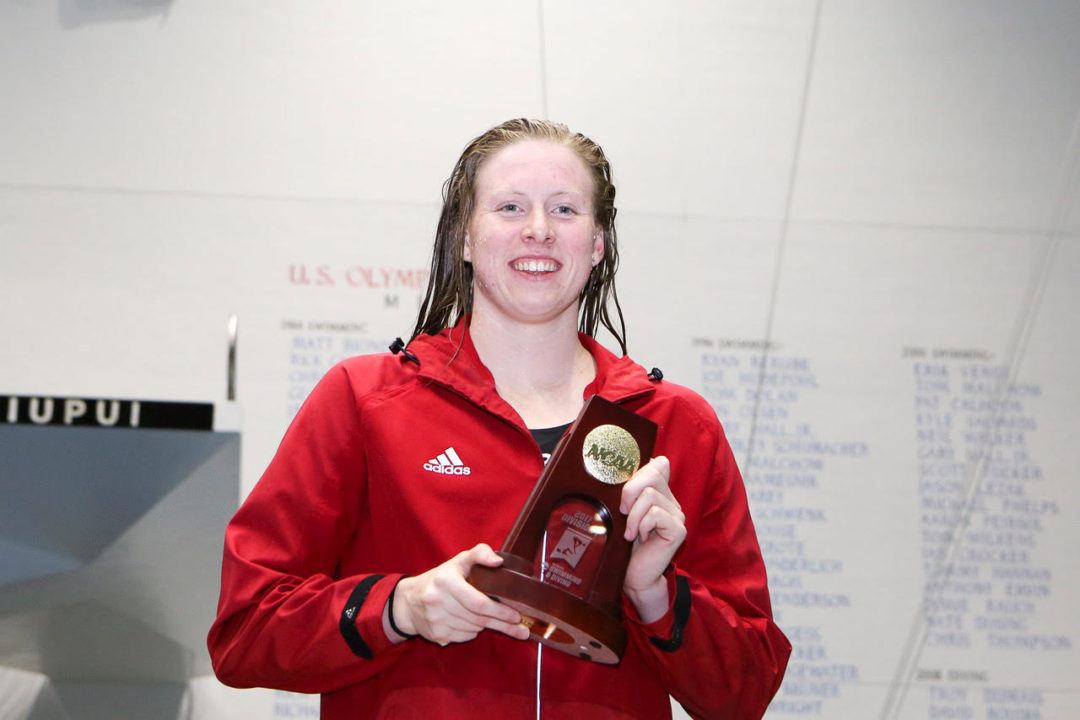 Indiana sophomore Lilly King wasn’t quite as fast as her NCAA and U.S. Open Record in the 100 breaststroke done a month ago at the Big Ten Championships, but she managed to get under her own NCAA Championship record in Friday’s final.

King swam 56.71 to tip off her conference-foe Lindsey Horejsi from Minnesota by three-tenths of a second. King swam 56.85 to win last year’s title in the event.

A comparison of her splits from the 3 meets

King has now been under 57 seconds three times in her career. Nobody else has done so even once.

Horjesi, who is only a freshman, moved up to 8th on the list of all-time performers in the event with her 58.03 second-place finish. That swim broke the Minnesota school record set by former NCAA champion Jillian Tyler in 2011.

“I train harder than anyone” at first I admired her guts to take on doping,but I now realize it was just another way for her arrogance to show. Her comments after the race showed she is arrogant and obsessed with herself. She isn’t humble at all. When you are at that level at ncaas everyone is training equally as hard. It is only a matter of natural physical talent at that point. She is in denile if she truely believes that the reason she won by over a second is because she works THAT much harder than anyone else in the field.

I agree with your words. Ms King lacks the tactful qualities of a true champion.

If she worked so hard, she would have done better in her 200 IM

My 13 yr old watched the live feed (on spring break?!) and was disappointed to hear King’s comments. Lily should be cognizant of those younger swimmers. They are listening and watching all the time.

36
-5
Reply
A coke and a smile
Reply to  Agegroupmom

I’m not so sure if her comments will help indianas recruiting in the near future. I do know that there was quite a few swimmers that have quit mid-season ( sprint-back) and was wondering if the team has become a toxic environment with this kind of mindset.

Hopefully you were able to say to your 13 year old, that is a young woman with a lot of confidence in herself and what she does.

Absolutely, but confidence should be paired with humility.

If she was so confident in herself, she wouldnt have to constantly remind everyone else about it.

Mr. or Ms. Dcrabbe, Even though she does come off a little bullish and a bit immature with her post-racing responses at times, she is the fastest swimmer in the country this year! A little ego is not a bad thing – I personally wish more athletes showed it. The best ones all have that attitude, just may be a bit more seasoned in their approach with interviews. And as someone who has met her numerous times, I would say she is quite humble and confident. Why does she need to be either or? And PS, her school, Indiana does train harder than most schools. It is not JUST talent. I remember when another breastroker in the past put up… Read more »

Then let me ask you this,why aren’t the other breadtrokers at Indiana producing similar results. It’s simple because they aren’t as talented. Don’t get me wrong hard work is a HUGE factor in swimming,but at the collegiate level(for top 10 programs) they all have crazy good work ethics. My issue isn’t with her confidence necessarily,it’s good to have that edge. My issue is with her naiveness mixed with rude comments. It is truely degrading and naive to say on national television that the main reason you won a race against 7 of the fastest swimmers in that in the U.S is because you work that much harder than them. It is just ignorant and rude. If she said ” I… Read more »

At first I thought she was just speaking tongue-in-cheek — but then I realized she was being serious.

Yes, but there way to answer to that question without saying something offensive.

Personally, I hope when Miranda Tucker is back next year for Michigan she kicks her butt. Of course she is a great athlete but she should let her actions show that. Not her mouth.

The worst competitor I’ve ever witnessed. I was completely disgusted by her reaction. That’s not what college swimming is about.

Really? Worst ever? Everyone upvoting that comment needs to get off their high horse

If she works that hard, then the 11 women who beat her in the Olympic semi-finals of the 200 breast must just be un-Godly talented. Maybe she thinks they just got lucky.

True and lol at your name