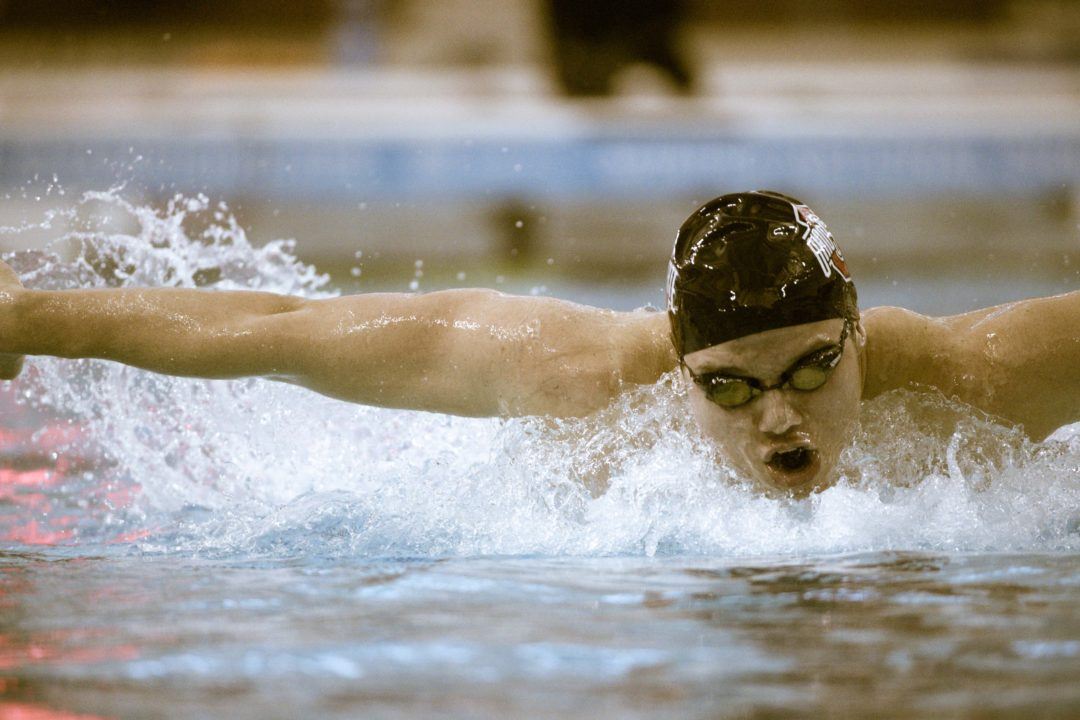 The Ohio State Buckeyes traveled south to race the Alabama Crimson Tide, and the team from up north got the win today on both the men’s and women’s side.

The men’s meet was closer, and the Alabama men came out with the hot hand, winning the 400 medley relay and then getting a win in an electric 200 freestyle. Bama’s Robert Howard went head-to-head with OSU freshman Paul Delakis, racing all the way to the final wall. Howard pulled off the win, going 1:36.67 to Delakis’s 1:36.70. Howard also went 43.60 to win the 100 free.

Noah Lense was big for OSU, taking both butterfly events. The sophomore was 47.20 in the 100 to lead a 1-2 OSU sweep, while he went 1:46.40 in the 200 fly as the Buckeyes went first through fifth. Lense also had an eye-popping relay split in the 400 medley– despite Alabama winning the race, Lense split a 46.02 swimming fly on the OSU B relay.

Tuscaloosa, Ala. – The Ohio State swimming and diving program went down to Tuscaloosa, Ala., on Thursday afternoon and snagged a pair of Top 25 wins over Alabama at the Alabama Aquatic Center. The 11th-ranked women knocked off the No. 17 Crimson Tide by a tally of 180-118, and Ohio State’s No. 16 men defeated No. 23 Alabama by a score of 168-132.

Ohio State had four swimmers win multiple events during the Thursday afternoon matinee in Tuscaloosa. Kathrin Demler controlled the intermediate distance races with wins in the 200 freestyle (1:50.19) and 500 freestyle (4:53.29). Noah Lense performed flawlessly in the 100 and 200 butterfly, as has been the story all year long; he won the 100 with a time of 47.20 and registered a time of 1:46.40 in the 200.

The men’s distance trio of Brayden Seal, Nick Hogsed and Ryan Vandermeulen were well conditioned for Thursday’s afternoon festivities. The threesome started off the day by going one-two-three in the 1000 freestyle with Seal’s winning time of 9:15.13 followed by Hogsed (9:15.24) and Vandermeulen (9:28.78). In the final distance event of the day, the 500 freestyle, Hogsed took individual honors with a readout of 4:26.25 and was followed by Seal (4:31.65) and Vandermeulen (4:35.91) for another one-two-three finish.The most dominant swim of the day for the Buckeyes was arguably the 200 fly on the men’s side. With Lense winning gold, the Buckeye swimmers quartet of Henrique Painhas (1:47.73),Daniel Gloude (1:48.54), Michael Salazar (1:48.55) and Ching Hwang Lim (1:49.43) followed right behind him for the top five times in the event.

The diving crew brought their A-game down to the South and left with four victories on the day.Lara Tarvit (277.30) and Stephen Romanik (343.40) collected first-place finishes on the one-meter board, while Genevieve Angerame (285.10) and Jacob Siler (364.10) earned the sweep on the three-meter board.

TUSCALOOSA, Ala. – The Alabama swimming and diving teams closed out its home schedule with losses to Ohio State Thursday afternoon in the Alabama Aquatic Center. The Crimson Tide men fell 168-132, while the women lost 180-118.

“We once again won all four relays, which was big and bodes well heading into the championship season when those relay points carry a lot of weight,” UA head coach Dennis Pursley said. “Our energy was really good to start off the meet and we rallied to finish strong, but we fell a little short in the middle. We also lost too many close races today, but those are things we can work on as we start down the stretch here.”

Alabama closes out its regular season Feb. 2-4 at the Auburn Invitational in Auburn, Ala.

and where are the Alabama mens team ranked 23?

“National team obligations” is the weirdest street name for Erythropoietin