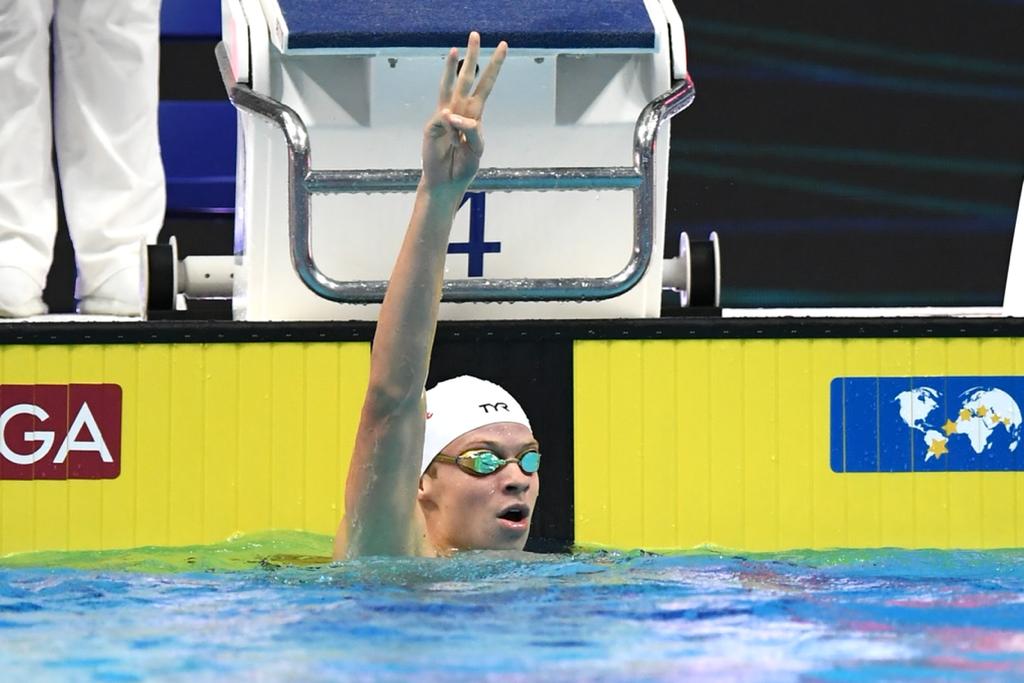 Katie Ledecky and Leon Marchand earned FINA Swimmer of the Meet honors based on a scoring system that awards points for top-four finishes. Current photo via Fabio Cetti

Katie Ledecky and Leon Marchand were awarded Female and Male Swimmer of the Meet honors, respectively, upon the conclusion of the pool swimming portion of the 2022 FINA World Championships in Budapest.

The United States also picked up the overall team award, tallying a record 45 medals over the eight-day competition.

🇺🇸United States finishes on 45 medals in swimming at #FINABudapest2022 breaking their own record 38 medals set in 2017!

The individual FINA awards are awarded based on an official scoring system, which you can find below:

This factors in individual events only. If there is a tie, FINA’s Swimming Commission determines the winner.

The American won the distance treble for the fourth time in her career, and with her victory in the 800 free, became the first swimmer in World Championship history to win the same event at five straight editions.

The 20-year-old set new French National Records in all three, but the highlight came in the 400 IM, where Marchand’s time of 4:04.28 marked the second-fastest in history, trailing only Michael Phelps’ 4:03.84 from back in 2008.

Closely trailing Ledecky in the women’s standing was Sweden’s Sarah Sjostrom and Canada’s Summer McIntosh, who both won two gold medals and one silver for 13 cumulative points.

Four others had one win and one runner-up finish apiece for eight points.

On the men’s side, Romania’s David Popovici and Hungary’s Kristof Milak won two events apiece for 10 points, and then Milak earned an additional two for his world record in the 200 fly to sit second overall with 12.

Bobby Finke, Nicolo Martinenghi and Ryan Murphy each earned one gold and one silver medal for eight points, and they were matched by Thomas Ceccon, who won the 100 back in world record time and added a fourth-place finish in the 50 back.

FINA hasn’t published the full standings as of this publication, but using this system, the American team compiled 1,159 points across 42 events.

European men ( even without the Russian) swept the podium. Knowing that they are all extremely young the future of American/ Australian male swimmer looks very narrow…

Not denying those swimmers as worthy winners, both have been amazing. But 2 points for and an individual WR, seriously. How hard are they to achieve. I would make the point system a little more tailored to dominance as well. Such was Ledeckys 800 and 1500 swims and her gap on #2 and closeness to WR’s.

So I guess Mollie helped determine the winner by rallying past Sjostrom at 100. Otherwise there would have been a tie between Sjostrom and Ledecky at 15.

I’d like to see somebody win this by taking 4th place in 16 events.

maybe peak hosszu could have done that

sO bIaSeD tO uS

I think your Cap lock is stuck

I think someone can’t add.

So fina agrees with SwimSwam!

On top spot.
I think Ledecky was on another level. Summer with a bullet behind.

On the men’s side, can make an argument on any of the top 3 Marchand, Milak & Popovici.
Popovici winning 100 & 200 at 17 years old is a little understated.

Where was the third event for Popovici?

I think breaking 47 and 1.43(or maybe even one of them) would’ve had Popovici clip Marchand for first.
Otherwise, no.

I think 3rd place is right for Popovici, but IMO winning the top 2 premier events the 100 & 200 free at 17 is very very impressive, especially going times in both that is touched with genius.