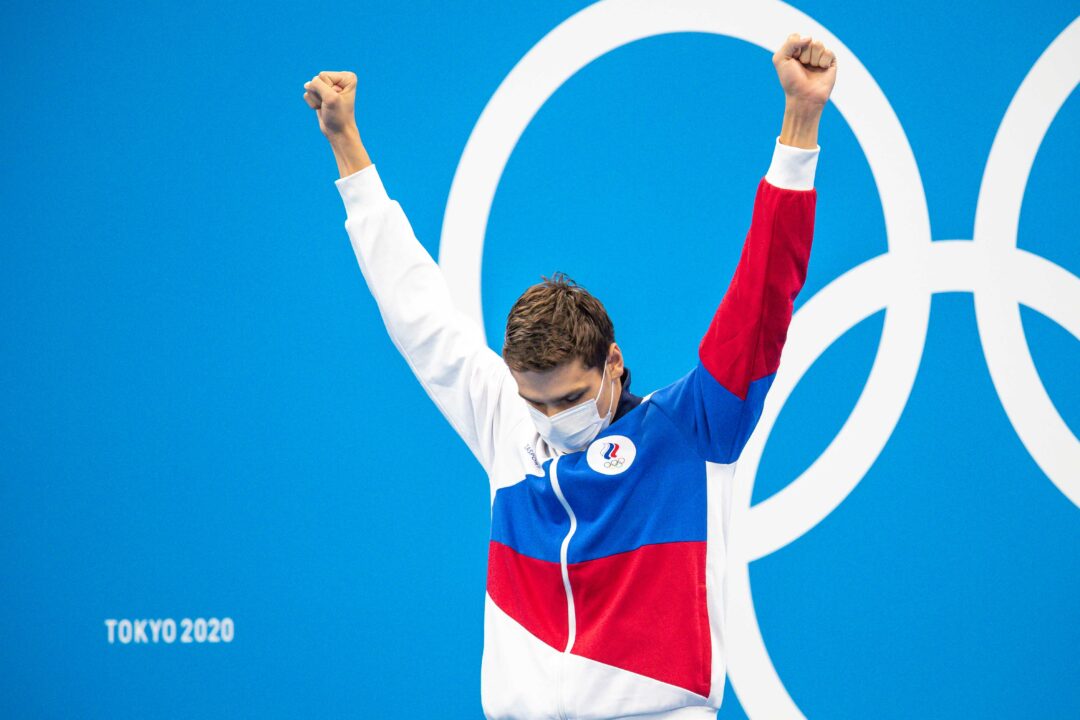 Despite receiving a nine-month suspension from FINA, Evgeny Rylov is among the entrants at the upcoming Russian Swimming Championships. Archive photo via Jack Spitser/Spitser Photography

Despite being denied entry into the 2022 World Championships, the majority of Russia’s best will be in action at the Russian Swimming Championships in Kazan.

The meet will kick off on Sunday, April 24, and run through Friday, April 29.

While it was initially slated to be a qualifier for the 2022 World Championships, the competition will now be used as the selection meet for the “Commonwealth Cup,” an event set to take place in Kazan in July.

The entrants include double Olympic gold medalist Evgeny Rylov, who recently received a nine-month suspension from FINA after attending a pro-war rally in Moscow in mid-March.

Rylov, who won Olympic gold in both the men’s 100 and 200 backstroke at the Tokyo Olympic Games last summer, has entered both of those events in Kazan, along with the 50 back and 100 freestyle.

Kliment Kolesnikov, the only other individual Olympic swimming medalist representing the Russian Olympic Committee (ROC) in Tokyo, will take on the men’s 50 free, 100 free, 50 back and 100 back. The 21-year-old claimed Olympic silver last year in the 100 back and bronze in the 100 free, and he’s also the world record holder in the 50 back.

Vladislav Grinev, Aleksandr Shchegolev and Ivan Girev also highlight some of the men’s sprint free events, while 200 free Olympic finalist Martin Malyutin headlines the action in the men’s 200 and 400 free.

Two-time men’s 200 breaststroke world champion Anton Chupkov, who was rumored to be nearing retirement after the Tokyo Olympics, is also entered to compete in the men’s breast events. The 25-year-old also owns the world record in the 200 breast with his time of 2:06.12 from the 2019 World Championships. Kirill Prigoda joins him in the breast events.

Missing from the men’s entries is Andrei Minakov, who recently wrapped up his first season at Stanford University in the NCAA. Vladimir Morozov is also missing from the psych sheets.

On the women’s side, 17-year-old Evgeniia Chikunova highlights the field coming off her European SC Championship victory and SC World Championship runner-up showing in the 200 breaststroke last year. In her Olympic debut last summer, Chikunova placed fourth in both the 100 and 200 breast, .04 shy of a medal in the latter.

Maria Kameneva is another big name on the women’s side, with Yuliya Efimova the most noteworthy absence. Kameneva is the Russian Record holder in the women’s 50 and 100 free, coming in as the favorite in those events, and is also the top seed in the 50 and 100 back.

With no Efimova in the field, Nika Godun is the one to watch in the women’s breaststroke events, while Arina Surkova, Svetlana Chimrova and Daria S. Ustinova are also entered to compete.

While Russia had opened the meet up to international competitors, expecting some entries from Belarus, it does not appear any foreign swimmers are entered to compete.

Russia continues to show complete disrespect for rules. A suspension = you are out. But clearly, they believe that rules don’t apply to them.

So is this fina sanctioned?

It looks like the American based Russians aren’t going…Yulia, Vlad, Andrei

Off subject a bit but is Energy Standard site back to training their athletes in Turkey? I think Kliment and Rylov trained there.

Maybe they will get the US citizenship? 😆
Imagine Efimova teammate with King at next olympics! 😆

I remember that Morozov has tried to get the US citizenship a decade ago to represent USA at 2012 olympics but he couldn’t get it in time and chose to stay with Russia.

Watch them all break WR’s, and then we find they all are doping.

Part of being a sports fan is believing everyone is clean. Obviously we know there are probably a frightening number of athletes who are probably doping but thats not our problem. If you fully believe that guys like Phelps and Dressel are clean then you can’t go around discrediting an athletes hard work just because of the country they represent. On another note I don’t think any world records or times from this meet should count due to the Ukraine situation.

You don’t really believe this will happen right?
And world records can only be ratified if they are set at meets with tests.