Kevin Thorburn: My Friend, My Mentor, My Coach 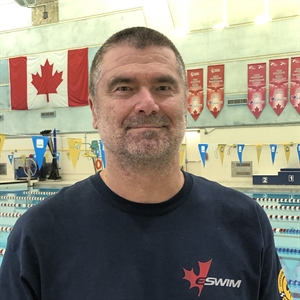 Throughout my swimming career I had many excellent coaches, but when I utter the words “my coach” you are the person I am referring to. Current photo via eswim.ca

I have had many excellent coaches, but when I utter the words “my coach” you are the person I am referring to.

Growing up in Regina was hard at times and wonderful at times. Many of those great experiences were created by your gift and ability to develop an environment where my teammates and I could thrive together.

The legacy of the team that you and Murray (Drudge) built is something special. After being part of and studying several successful programs I believe Regina was unique.

We were the epitome of the “Mouse That Roared.” As you said to me in our last conversation, you gave us a template for the rest of our lives. We dreamed big and you taught us how to forge the path.

At every opportunity you molded our mindset. Carefully picking movies like Hoosiers for us to watch when riding the bus and teaching us about Vince Lombardi and the Green Bay Packers. To this day one of my favourite movies is Hoosiers along with one of my favourite books being When Pride Still Mattered.

I know I was not your ideal athlete to coach. Although I possessed some talent as a swimmer I never bought into your philosophy of being great at all 13 Olympic events. As an age grouper I believed anything over 100 meters was simply silly.

Even with my defiance and stubbornness you believed in me. That belief was stronger than I had in myself.

Years later when I asked what I was like as a swimmer your answer made both of us laugh, “You never ever missed a practice. Through blizzards and other obstacles you were always there.”

No matter how much I pissed you off, which I know I did, you still had faith in me.

You fostered my love of the sport. Swim (later SwimNews) magazine was one of your prized possessions. No one dared to touch your copy without being bone dry and having hands that were close to being sterilized.

You went over the numbers in those pages with a fine tooth-comb. As you shared that information you spoke with enthusiasm and certainty of how we would use it to become a dominant age group team in the country.

The first time an article of mine was published in SwimNews one of the reasons I was so excited is I knew you would read it with pride. Also that you would never allow the pages to be smudged, creased or have a corner folded over.

You not only shaped my life in the water, but you literally saved it. As a teenager I faced challenges beyond my comprehension, but they did not seem to be beyond yours.

There were many times I came close to ending my life, but the pool was a safe haven because I knew no matter what there was always one person who believed in me and was there for me.

It was only later that I found out we battled similar demons. A lot was unspoken between us when it came to this, but because you sensed it you were able to convince me life was worth living.

When I began my coaching career the excitement you expressed over any glimmer of success I had motivated me even more. The pride you had when speaking with me about my writing did the same.

There are so many conversations we had that seemed like they would never end. You were always two steps ahead in your thinking, which is why those talks involved awkward silences where you waited for me to catch up. I am not sure I ever did.

We had several chats that were meant to be parts of articles I was going to write about your coaching tactics and ability to build successful programs.

I never shared the reason why those articles were never written. Pen was not put to paper because I was worried my words would not live up to how I felt about you as a coach and more importantly a person.

You once told someone you couldn’t wait to see those articles because, “Jeff makes everyone look so good.” I didn’t then, but I hope my words do now and they put a smile on your face.

When Murray recently passed you told me you felt like saying to him, “What were you thinking? You have another 30 years ahead of you!”

You also quoted Jim Morrison from Roadhouse Blues, “The future is uncertain and the end is always near.”

Unfortunately now those words echo in my head.

With all the love I could express to anyone rest in peace my friend, my mentor, my coach.

Wow! That letter says it all about the kind of coach and person Kevin was in life. As a coach myself, I can only hope to live up to this standard. When it’s all over, the relationships and bonds we build are more important than the achievements. I feel like I do that with most, but some escape me. I’m going to print this letter out and put it in my office (after this pandemic) is over as a reminder of what really matters. Thanks for your words.

Well done Kevin! I believe our sport is blessed with countless similar examples of the impact coaches have had that go far beyond society’s definition of winning. Thank you Jeff, for sharing this story.

Thanks for sharing Jeff! I am sure it was hard to put down on paper how you were feeling!