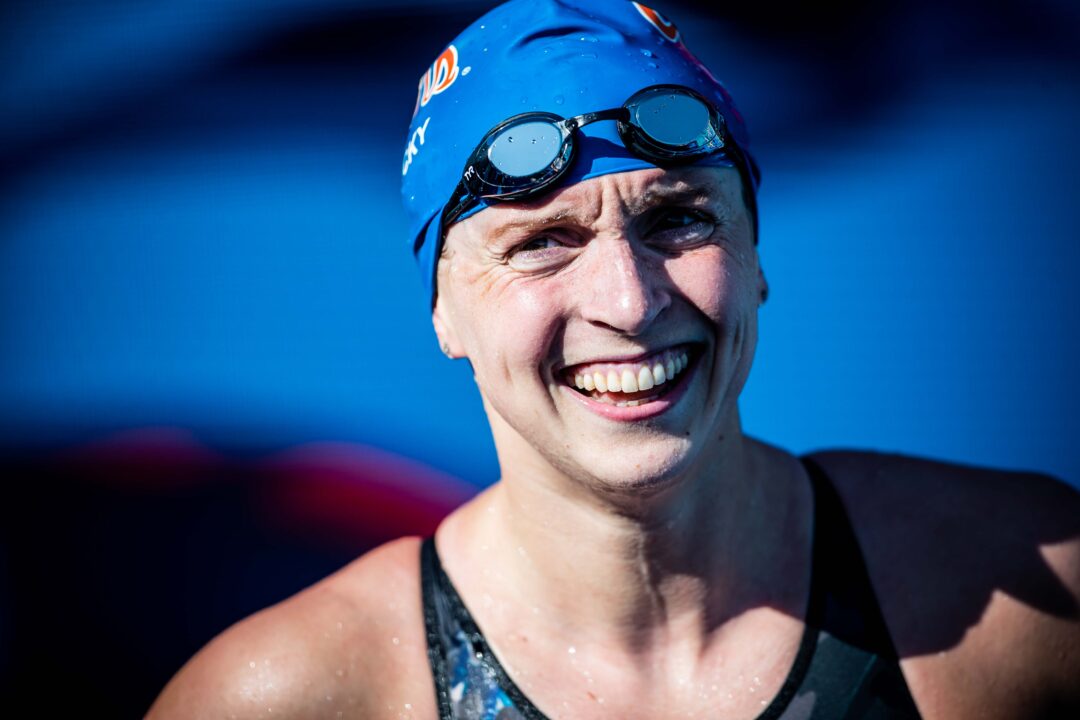 After Canadian teen Summer McIntosh won a head-to-head battle with Katie Ledecky a few weeks ago at a World Cup meet; Ledecky fought back on Thursday in Greensboro. Archive photo via Jack Spitser/Spitser Photography

American swimmer Katie Ledecky won her 400 free rematch on Thursday against Canadian teen Summer McIntosh. In the process, Ledecky swam 3:59.71, to break her own U.S. Open Record in the event. She set the old record of 4:00.51 at last year’s championship.

Ledecky’s margin of victory in this race, .08 seconds ahead of McIntosh, was the same margin between the two at the recent FINA World Cup Series meet in Toronto. In that race, which was swum in a short course pool, McIntosh was the winner, setting a World Junior Record and becoming the #2 performer in history.

Simulated Race, based on splits

A comparison of the relative caps from the two races:

The chart shows that in both races, Ledecky took an early lead before McIntosh fought back.

This creates a different dynamic in the pool, and in the headlines, than what we’re used to in Ledecky’s career. Most of what has been written about Ledecky throughout her career has been about things like another entry on the all-time top swims list in the 800 free, an unreasonable margin of victory in the 1500 free, or clearing the Olympic Trials standards in the 200 free, 400 free, and 800 free in the same race, as she did in her first swim of the meet on Wednesday.

“I’m really happy with that race. I knew it would be fast tonight with Summer (McIntosh) right there. We brought the best out of each other tonight. I think that’s the first time I’ve been under four minutes in December, or in the fall, so I’m pleased with that at this point.”

Ledecky is now staring down a huge battle with not just one, but two rivals for the Paris 2024 Olympics in this 400 free. McIntosh will be 17 when the Paris Games kick off, and Australian Ariarne Titmus will be 23. Ledecky will be 27 by the time Paris begins.

Titmus won the Olympic gold medal and took Ledecky’s World Record in the event last summer, and now the Canadian teen McIntosh, who trains about 3 hours from Ledecky in Sarasota, Florida, makes the juiciest rivalry in women’s swimming a triad. Ledecky has left a huge legacy for the sport, and generating this sort of excitement is the icing on top, whether she wins or not.

“Ledecky is now staring down a huge battle with not just one, but two rivals for the Paris 2024 Olympics in this 400 free. McIntosh will be 17 when the Paris Games kick off, and Australian Ariarne Titmus will be 23. Ledecky will be 27 by the time Paris begins.”

Y’all are sleeping on the SCM world record holder?! It is a four person race at least!

To the naked eye it looked like summer out touched her at the wall, but the race is in the US and of course omega.

It really did. Even if you rewatch the video at .25x speed it’s like… there’s just no way. But hey, it was a close one regardless, and there are much more important races yet to come!

When you slow it down at .25x speed you can’t see how much Summer was slowing down into the wall

Are you trying to say they tried to help us swimmer because the race is in us cause that just ridiculous and from the screen it looks close and that’s why the gap is .08 and Summer looks in front but Ledecky is the one who touched the wall first.

The classic excuse Americans give the touch pad. Omega is American financed any ledecky is amazing and a legend. Summer is too classy to say anything. I just want competition to be fair the pressure to win in America and Australia is intense. I just hope ledecky and Titmus are clean when they race summer in Paris.

Of course yesterday race is fair and Ledecky is much faster on the last 50 than Summer and this thing about omega is just an excuse for you to accept the result and right now it’s just ridiculous to questioned whether to race at Paris is clean or not cause it will be clean just like any other Olympics.

Ben Johnson was ages ago and Canada cleaned up its act other nations not so much.

I still want to know Omega timing is allowed to call itself “live” results when there is nothing “live” about it?