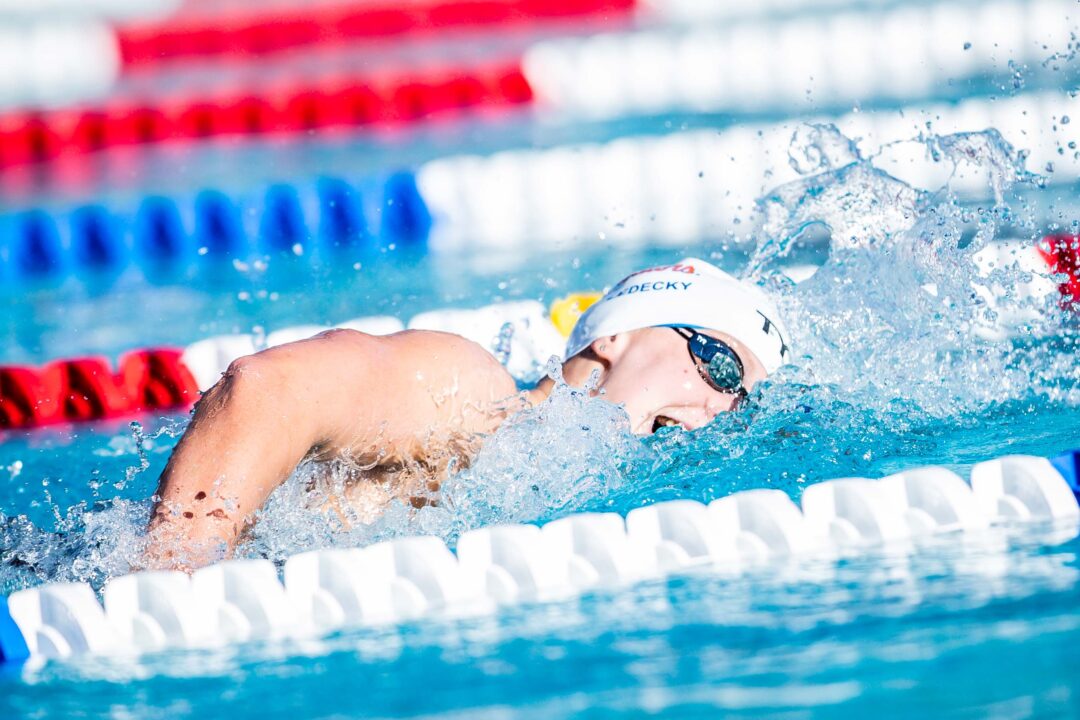 Katie Ledecky and Will Gallant became the first female and male swimmers to qualify for the 2024 U.S. Olympic Trials with their swims in the 800 free. Archive photo via Jack Spitser/Spitser Photography

Katie Ledecky and Will Gallant became the first female and male athletes to qualify for 2024 Olympic Trials with their respective finishes in the 800 freestyle at the U.S. Open.

The qualifying period opened today on November 30, 2022, coinciding with the first day of the U.S. Open.

Coming off two world records at the FINA World Cup in the SCM 800 and 1500 freestyle, Ledecky posted 8:13.90 to win here in meters, getting under the time standard by a massive 31.89 seconds. She was just over a second off her meet record of 8:12.81 from 2021. With the fastest heats of the 800 free hitting the water first, it’s no surprise that Ledecky posted the first Olympic Trials cut. Ledecky is also entered in the 200/400/1500 freestyle later in the meet – but if she requested intermediate splits, she already has qualifications in two of those races as well.

Gallant, a junior at NC State, swam 8:08.20, getting under the time standard by 1.49 seconds. His lifetime best is the 7:53.34 he swam to finish second at 2022 U.S. Nationals. He finished fifth in the fastest heat of the men’s 800 free, but was the fastest American. Guilherme Costa, Alfonso Mestre, Stephen Steverink, and Eric Brown all swam faster than Gallant, but all of them represent non-U.S countries. With 15-year-old Sean Green finishing sixth in 8:11.41, Gallant was the only one in the heat to qualify for Trials.

All of these cuts are faster than they were for Wave I of the 2021 Olympic Trials, though they’re slower than the Wave II time standards. The qualifying period extends 18 months, ending on May 30, 2024.

Emma Weyant also qualified with 8:41, actually a really good swim for her

Katrina Bellio is not American

Did she make 3 cuts in one race?

True. But only if she requested intermediate splits to be officially recorded. I asked USA Swimming to verify if she did that (which really only matters for ceremony and circumstance).

I’d bet money she didn’t, just because it’s so meaningless to someone who’s going to cruise under the standards later this week.

Grothe in a later heat went faster than Gallant with an 8:02.95