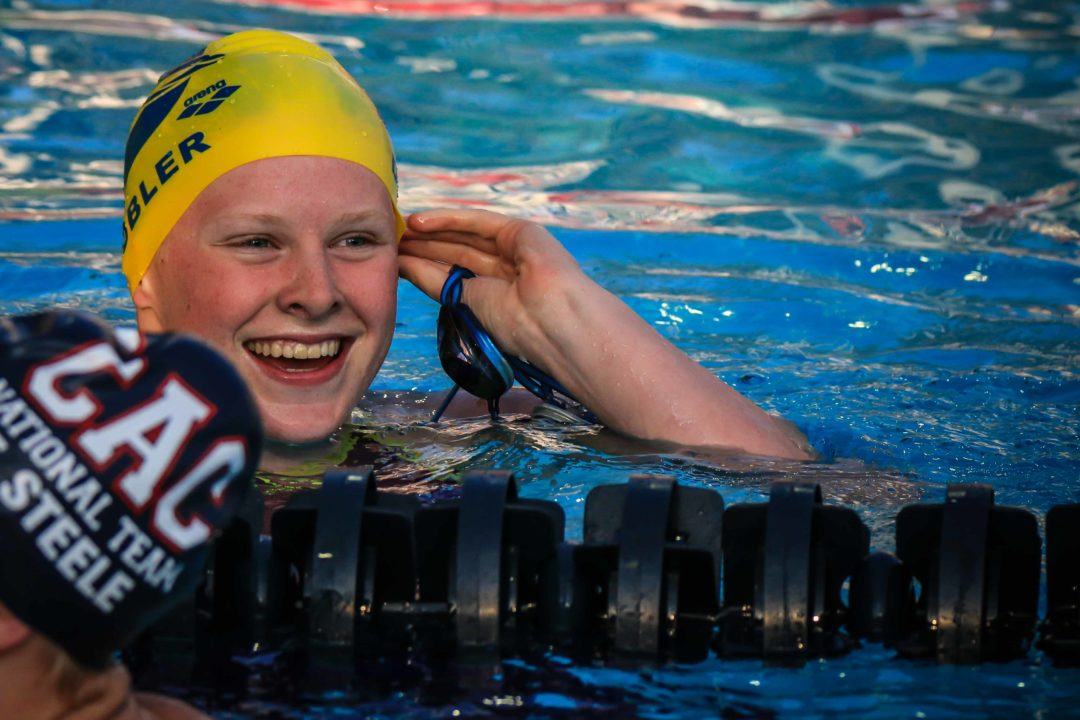 Meanwhile, the Bruins won the majority of swimming events tonight, and the teams are locked in a tie going into tomorrow's second and final session. Archive photo via Jack Spitser/Spitser Photography

The Los Angeles Pac-12 teams are meeting this weekend for a two-day meet, as the USC women look to claim their 14th-straight over UCLA. Both teams typically let it fly at this meet, and this evening was no exception.

USC freshman Kaitlyn Dobler was a revelation, dropping a lifetime best 57.71 in the 100 breast to win by over four seconds. Her swim is a huge milestone, breaking the USC school record, a 58.10 done in 2009 by former World Record-holder and USC great Rebecca Soni.

Dobler, who came to college with a lifetime best of 58.35, edged her old PR with a 58.31 in a January dual against Cal. Tonight, she broke through the 58-second barrier for the first time ever, climbing up to #1 in the nation this season.

UCLA held strong, though after giving up the first individual event to USC’s Isabelle Odgers (9:53.46).

After Dobler’s dynamite 100 breast, UCLA freshman Baron soared to a new lifetime best in the 200 fly, clocking a 1:55.66 to win by over three seconds. She now sits #16 nationally with that swim. Heading into college, Baron touted a lifetime best of 1:57.97, which she hacked more than two seconds off of tonight. In the 50 free, the last event tonight in the pool, Grover picked up yet another close win, going 22.55 to out-touch USC freshman Anicka Delgado (22.60) and Ciesla (22.78).

In the past, I believe UCLA and USC suited up for this meet. Looking at these times, I am guessing that is still the case.

Let’s Go Bruins! These ladies were incredible Friday – so many lifetime bests. Let’s close it out with a a win!!!

The US women’s 100 brst field is so strong. Can’t wait to watch the final at trials!

She looks great. The top three in the nation have been freshmen – her, Elendt (Texas) and McSharry (Tennessee). Between them and Hansson/Wenger/Hartman, there will probably be a bunch of 57s.

I’ll be interested to see if Walsh swims the 100 Breast at NCAAs. She’ll definitely be in the mix for the title if she swims it but if she can put up competitive times UVA really needs her in the 100 & 200 Back.