Juniors Day 4 – Dressel Makes Statement With Records From B Final 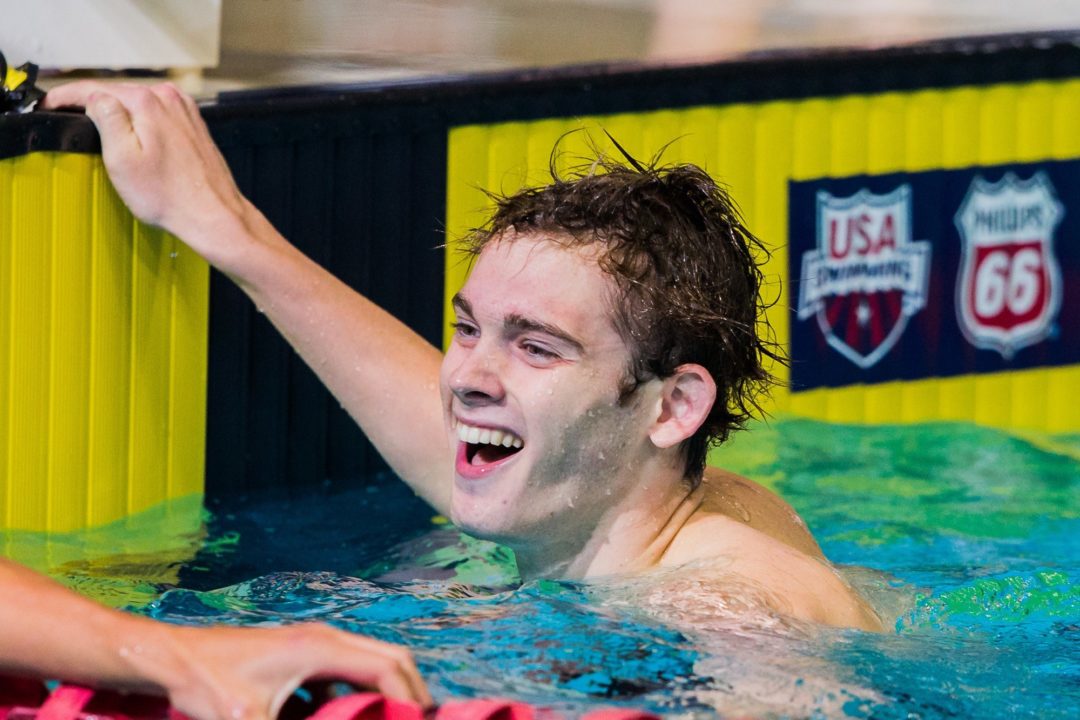 Gunnar Bentz swam tough tonight with back to back swims where he finished first in the 200 freestyle and second in the 100 breaststroke.

A few more meets from last weekend have made their way into official results, and we’ve got updated top 20s and team scores from the Winter Championships.

It’s night four of swimswam coverage here in Irvine, California at the USA Swimming 2013 Junior National Championships. This is the fastest Juniors we have seen in years, and the future of swimming continued to impress with three new meet records set tonight – making our total 14 so far.

Quinn Carrozza, Texas Longhorn Aquatics, led wire-to-wire here in the finals of the women’s 200 freestyle. She was out at 27.61 at the first 50, and flipped well under a minute pace at 57.50.

Katherine Drabot (OZ) had a very strong wall coming off the hundred. She slightly challenged Carrozza, out splitting her on the third 50, 30.22 to 30.43. It wasn’t enough to overtake as Carrozza responded with a dominating closing kick and tempo to pull away from the field.

The A final was a close field at the half way mark, with just about every swimmer turning about a second within each other at the 100m mark. Following the textbook race strategy in the 200 freestyle, Gunnar Bentz (DYNA) made a move on the leader Blake Pieroni (DUNE).

Pieroni had about .5 on Bentz at the 150m, but Bentz laid the hammer down out splitting Pieroni 27.5 to 28.5, enough to surge him in front. Bentz took the title in 1:49.57. Bentz was key to Dynamo men’s winning and record setting 800 freestyle relay last night.

The real story was in the B final. Caeleb Dressel from Bolles failed to qualify in the A final this morning, finishing 9th in the preliminaries session. He came back tonight to absolutely light up the B final. Clearly out to prove he was the best in the water, he was out fast on the field.

Dressel has had a strong meet thus far, winning the 100 freestyle, finishing second the 100 butterfly and having the top time in the 200 freestyle tonight. He will go for the 50 freestyle title tomorrow.

She was the top seed with a great morning swim at 1:09.00 and Bethany Galat (SBSC) was able to back that up tonight. She won the women’s 100 breaststroke a little off her preliminary time at 1:09.59.

Galat had quick reaction time, registering at .59 easily visible ahead of the field. She had quick early speed out in the only 31 at the 50m mark. That quickness on the front half crept up on her slightly in the final 25m as Olivia Anderson (AQJT) and Kennedy Lohman (LAK) made their move.

Their effort weren’t enough to overtake Galat in the final 10m. Unfortunately, Kennedy Lohman DQ’ed with a flinch at the start, after finishing second unofficially. That moved Olivia Anderson to second at 1:09.37.

Carsten Vissering (NCAP) was just .2 off the meet record this morning, and he had no intention of missing it tonight based off his swim. He had a commanding lead, way under record pace at the 50 turning at 28.97, the only sub 29 of the field.

In a tough double, Gunnar Bentz (DYNA) came off his win from the 200 freestyle to finish second here at 1:02.39. He was turned last at the 50, the only 30 in the heat, but known for his closing speed he moved up fast and furious. He ran out of room and settled for second in his second race of the evening.

Clara Smiddy (AKS) has struggled through knee injuries this past year. By the looks of her tonight, she has made a full recovery sealing it with a win the women’s 100 backstroke with a time of 1:00.51.

Smiddy had a small margin, out at 29.53, just slightly over Hannah Weiss (KING) who was 29.64. Off the turn, they remained even but Smiddy looked stronger over the final 25m, accelerating through the water pulling away from the field.

Kylie Stewart from Dynamo was in her second swim of the night after finishing 5th in the 200 freestyle earlier in the night. Stewart has very solid underwaters and she was able to finish 2nd at 1:01.44.

Harty then turned it on, increasing his stroke rate significantly and ramped up his kick. He passed Stuart by the final 15m, and held on for the win at 56.05.

Stuart fought hard all the way to the finish, almost looking like he would regain the lead. But Stuart had to settle for silver, as he finished second at 56.16.

Dayton Raiders had three swimmers make it to finals in this event. Joshua Quallen and Patrick Mulcare topped the B and C finals, while Henrik Pohlmann finished 3rd in the A final at 56.71.

The women had their turn at the 800 freestyle relays tonight. From the second heat tonight, York YMCA came home with a new meet record with a time of 8:10.13. The record belonged to North Baltimore set last year.

Dynamo spread with their two A finalists in the 200 freestyle from earlier tonight, Kylie Stewart and Nicole Stafford to keep them in the hunt. Stafford had a pounding kick to split 2:00.96 to surpass Mission to get second at 8:15.06 to 8:15.69.

Connor Green from ABF was 2nd in the Men’s 100 back, not Stuart, which makes for a 1-2 for New England in that event.

The Penn State class is having a good meet. Schuehler, Bantley, and Stasiunas all putting up times.

With the returning talent, all they need is a coach…

Yeah NCAP is gigantic and had a bunch of different sites, there are two sites that haw most of the high school talent though, the Georgetown prep site in Rockville md has vissering, ledecky, Brian tsau, Gavin springer, grant Goddard and more. I’m less sure about everyone else but the Tyson site in Tyson Virginia had seliskar, Janet and Phil hu, Megan Byrnes and I think Cassidy Bayer. Then the rest is spread out between the billion other sites

That was meant for jimmy, my bad

Does anyone know if Dresses is going to be a junior or senior in high school? Man this guy is GOOD!