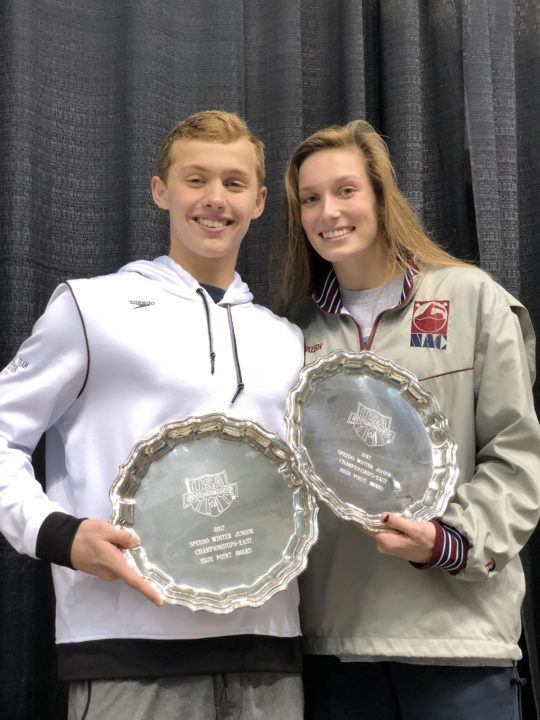 Day 3 finals at 2018 Speedo Winter Juniors – East will be devoid of two of the East’s biggest stars in some of their strongest events: Alex Walsh of Nashville Aquatic Club (100 breast) and Mason Manta Rays’ Carson Foster (100 back). Laker Swim’s Isabel Ivey, on the other hand, is seeded in the top-2 in 3 events (200 free, 100 breast, and 100 back) and will race in all three finals.

Walsh, the meet record-holder in the 100 breast, swam a field-leading 59.86 in prelims, the only sub-minute in the morning. She gave up her spot in lane 4 of the A final, however, to concentrate on the 100 back where she is also seeded first. Walsh was only 3/10 off her PB in morning heats of the backstroke; she swam a 51.76 and will contest that final, as well as the 200 free relay, tonight. With Walsh ceding her spot in the breaststroke final, #9 Sophia Zhang of Asphalt Green (1:02.18) will move into the A, both Ella Bathurst of Greater Tampa and Claudia Butterfield of Cincinnati Marlins (tied for 16th in heats with 1:02.56) will swim in the B, and #25 Hannah Ownbey of Y Spartaquatics (1:03.01) will contest the C final.

Carmel’s Davis scratched out of the 400 IM after finishing 17th in prelims; as mentioned above he will be in the A final of the 100 back. 14-year-old Josh Zuchowski of Flood Aquatics, 25th out of heats, declined his spot in the C final of the 400 IM. #26 Mike Jeschke of Aiken-Augusta Swim League (3:57.49) will get a second swim in tonight’s C final.

If they didn’t swim nationals – came here – swim your swims….

what happened to her leadoff on the medley relay last night? did she slip? i think she was 53 low to mid