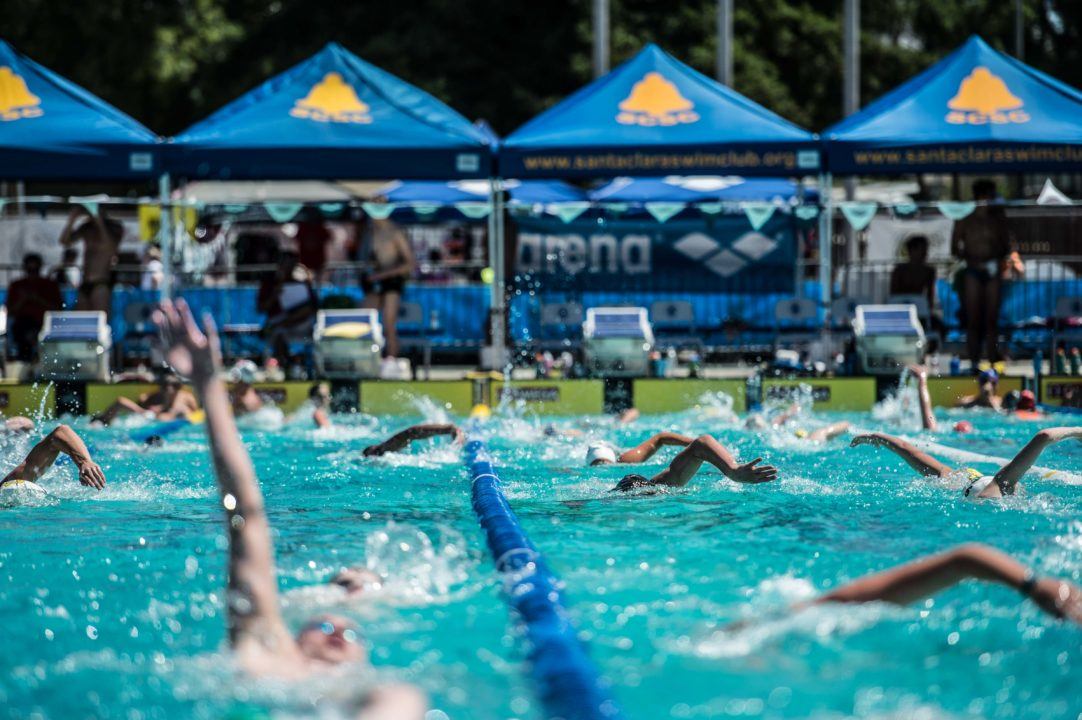 Bitter also issued an apology to Santa Clara Swim Club when he appeared in a local court Friday for sentencing, which was pushed to March. Stock photo via Mike Lewis/Ola Vista Photography

Former Santa Clara Swim Club CEO and head coach John Bitter is working to sell his Arizona bar in order to pay restitution to the club from which he admitted to embezzling hundreds of thousands of dollars, the Silicon Valley Voice reported Saturday.

Bitter was fired from SCSC in late 2018 and later handed four felony charges. He was arrested in April, and in October, Bitter admitted to embezzling at least $500,000 in SCSC money and using it to purchase the Tipsy Coyote Bar and Grill in Scottsdale, Arizona. Investigators found that he bought the bar for $750,000, $300,000 of which came from a loan taken out in the club’s name.

Bitter appeared in a Santa Clara County courtroom Thursday for sentencing, but the judge agreed to postpone sentencing until March 27 at his camp’s request. On his way out of the courtroom, Bitter issued an apology to SCSC.

In September, Bitter pleaded no contest to felony charges of embezzlement, grand theft and forgery. He is facing a prison sentence of no more than five years and eight months. Should Bitter pay full restitution, the judge could issue a lighter sentence — potentially without prison time.

Yes, but his crime was theft if he pays it all back and he has lost his job and reputation why should tax payers also pay for his room and board.

Didn’t argue that he should be able to do it. Just that also paying for his jail term doesn’t have to happen. His job is gone but also his career as no one will ever trust him again. He didn’t steal from an organization that was using the funds for a life or death cause, realistically it is causing chaos in the leisure time of our wealthy clientele. Pay it back, be on probation and try to make amends going forward with exemplary behavior.

I don’t really know how to argue against your point. Should we just let everyone out of jail so we don’t have to pay taxes for jails with the hopes that they won’t be criminals anymore? He stole $500,000, that’s not a small crime

I think the discussion about jail sentences is already happening particularly where drug offenders are concerned. I do think that in the age of information where offenders have a harder time moving on to commit the same crime elsewhere, what is the appropriate penalty is a reasonable question to discuss. Incarceration is meant to keep people that are dangerous to society at bey or to keep those that would repeat offenses from having the opportunity. Not sure it is particularly effective as just punishment for one time crimes as far as insuring that the perpetrator reforms.

They could at least fine him a lot more than he owes if jail is out of the question.

I agree that a fine makes a lot of sense and is often part of a sentence. Not sure if that was this case.

In general, I am in favor with reducing the prison population for non-violent offenders. That being said, if you just pay back the money you stole and are off the hook…there’s no real disincentive to steal money. There’s no “downside risk,” because the worst case is you end up at zero.

But, I would be interested in looking at different and creative ways to punish people for these sorts of crimes. Community service, repayment with some substantial degree of interest, etc. Maybe we as a society need some new mechanisms to ‘atone’ for crimes that doesn’t involve jail time. But, I also don’t think you can just say “oh he lost his job, so that sucks, punishment enough.”

I agree with all you say except that it is not just loosing your job with this type of thing anymore. You cannot just move on to another town or state. He will(or is) be banned by USA swimming and would come up in any background check as a no go. And rightfully so. The question is is the punishment appropriate. I would argue that few if any go into swim coaching that are money motivated, but as you go along you become more aware that money is needed. This man found himself in a position where the money was there and he had access to it and convinced himself that it was his due for the time and effort… Read more »

Perhaps besides paying back every penny, he can be given 1000 hours community service.
I believe everyone should and can be forgiven, but there should be some punishment.

Just in case you haven’t been paying attention, states like CA and NY are implementing no bail/no prison time for some pretty major non violent offenses. And it’s not just wealthy people.

Kind of sucks when the only reason he is wealthy is because he has been embezzling for so long.

Except that he’s not wealthy. Once he pays it back he will be back to where he started from, minus his job, minus his career, minus his ability to get most jobs because of his criminal record. That was Mikes point all along, which I think most people overlooked. It’s his future employment options that are all stripped from him, which over a lifetime is a likely million dollar cumulative financial penalty, and he is not getting away scot free by returning the money.

On what planet do you steal hundreds of thousands and potentially not do anytime?

Go talk to a forensic accountant. Their stories will absolutely amaze and infuriate.

The same planet where the geniuses behind the 2008 financial crisis didn’t do any time.

What a tragedy. For those who have read the classic “Gold in the Water” (and for those who have not, mikeh orders you to log off right now and read it), the book details a financial scandal at the Santa Clara Swim Club around 1999-2000. Unpaid taxes, missing money, etc. From the book’s account, it was a major distraction leading up to Olympic Trials.