Former SCSC Coach John Bitter Pleads No Contest, Will Be Sentenced in January 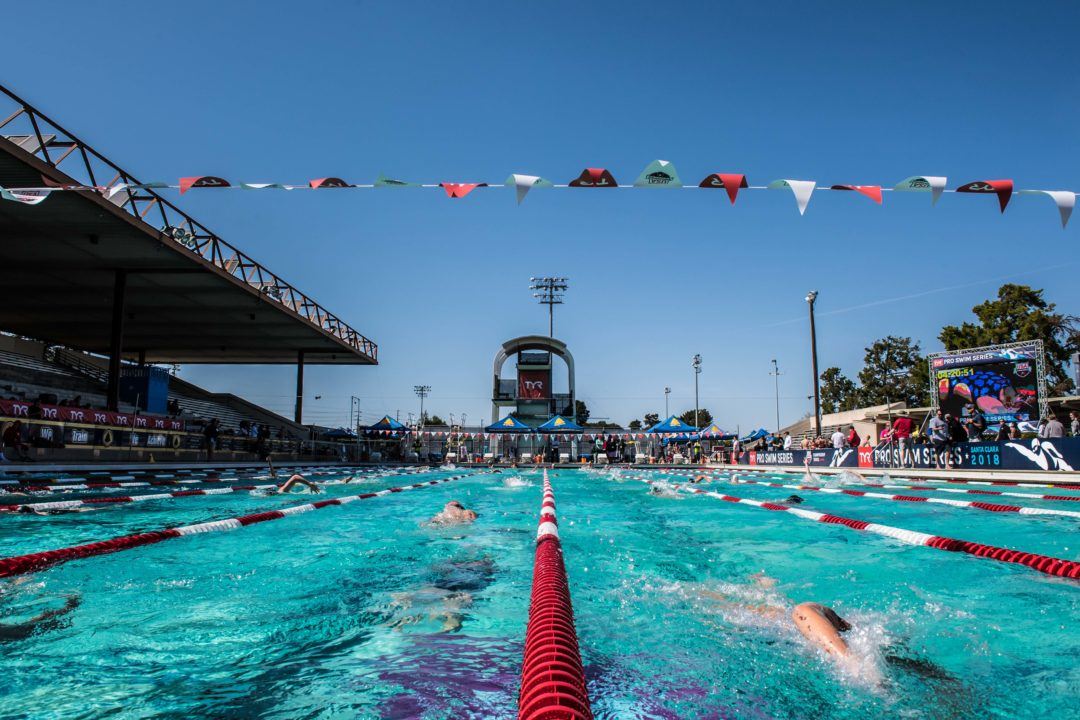 Bitter, who was arraigned in May, will face no more than five years and eight months in prison when he receives his sentence. Archive photo via Mike Lewis/Ola Vista Photography

He admitted to embezzling at least $500,000 in Santa Clara Swim Club money and using it to purchase the Tipsy Coyote Bar and Grill in Scottsdale, Arizona. Investigators found that he bought the bar for $750,000, $300,000 of which came from a loan taken out in the club’s name.

Bitter was formally charged April 11 and was arraigned in May in California on a total of eight charges, including six felonies. He is now under house arrest after having been held at Elmwood men’s jail since being arrested in Arizona and extradited back to California.

He entered his plea after the judge on the case offered a sentence of no longer than five years and eight months in prison, which is three years fewer than the maximum prison time imposed under the charges, according to the Mercury News. Bitter is ineligible for probation because his theft exceeded $100,000, and his sentencing is scheduled for Jan. 10, 2020.

Speaking with the Mercury News, Bitter declined to comment on the details of his case but discussed the impending resolution broadly.

“I’d love to stand up in front of people and bare my soul,” he said, but added that the “requirements involved in his plea” limit what he can say. “I’ve gone through every type of emotion you can think of. … It is something I have to wrestle with on a daily basis. I have to reconcile with myself the disappointment I have created to the people I dedicated my life to helping.”

Erik Colwill, the club’s financial director, told the Mercury News that he’s happy to be moving on.

“I’m glad it’s been resolved,” Colwill said. “I hope we can put this behind us and go back to focusing on the children.”

Bitter was terminated by the club in September after the board of directors gathered evidence of the misappropriated funds. From 2009 through 2017, Bitter was the General Chair of the Pacific Swimming LSC Board of Directors and is a former Vice-Chair of Program Development for USA Swimming.

The Santa Clara Swim Club was a long-time host on USA Swimming’s Pro Swim Series (previously known as the Grand Prix Series), and for a period in the 1960s and 1970s was arguably the most successful club in the United States. Among the program’s alumni are Pablo Morales, Don Schollander, Donna de Varona, and 9-time Olympic gold medalist Mark Spitz.

Allison Beebe was briefly elevated to the head coach position after Bitter’s departure but is no longer listed on the team’s website.

Coach John was actually a good coach. I heard about this when I was in Gold Bell, and I’m like wtf. Can’t believe he did this.

That board is just as bad! And yet still in place. Google the VP and you’ll see she’s no stranger to shady dealings. Hoping the parents and members continue on their quest to get a new and improved board in place so SCSC can truly reset.

The reputations of coaches and teachers are very fragile. It doesn’t take much to mess up either one of them.

Where is Allison Beebe? Why did she leave?

What Bitter did was horrible and he is going to get what he deserves. But the board and Allison Beebe are nearly as bad. The board lies to the membership and claims “transparency” is their goal. Beebe left a mess and many quality coaches and staff left because of her.

True, Bitter messed up big time… unfortunate. Why doesn’t the scsc membership take a vote of No Confidence? They must be covering up something huge! On the Beebe matter, I believe the Swimswam comments on the article of her leaving First Colony were pretty bad. Any why did she need to tear scsc down? Next employer should be careful.

The SCSC world is having a new election soon and hopefully it will vote out existing board members. As for Beebe, she was always a fish out of water in California. She seems like a truly unhappy person and acts as if she is the only person on a staff capable of coaching athletes to success.

I’m sure the current scsc staff will do just fine… they’re really great coaches. It’s really sad when a coach thinks they are the best and everyone else is dumb or clueless. I wish scsc a fruitful future. They need to get the right fit for a new leader… hope they don’t rush through it. We’ll see.

SCSC currently has a board of directors who allowed a coach to embezzle hundreds of thousands of dollars, then hired a coach who quit without a succession plan and finally removes their kids from the team yet still makes decisions for the future of the club. Who thinks this is a successful model for the team, the coaches or the kids? Disgraceful for one of the most storied programs in the history of swimming. George is rolling over in his grave.

Not to mention that they’ve raised membership fees to cover numerous legal costs and hired a CFO to do their oversight for them.

Sounds like they are doing their job, that they get nothing of monetary value for, so their kids can swim under the NCAA rules, unlike some other volunteers.

I believe they have hired within or are about to. How many of the HCs of this storied program are lifetime bans from USAS now…. 3? 4? Anyone with ethics and drive, while not afraid to make culture changes, can make a huge positive impact for these athletes.

BIG FAN…how can you call it cleaning up a mess when you just leave a bigger mess? SCSC could do far worse than hire from within. There are some quality, lifelong coaches on that staff who have done well there already.

That’s what people thought of coach Bitter, they were wrong and you are too. It’s time to change the corrupt culture of the club. Three head coaches banned from USA swimming. Any of the coaches that have been there a while have modeled after them. Time for new blood.

That’s what people thought of Coach Bitter, they were wrong and you are too. It’s time to change the corrupt culture of the club. Three head coaches banned from USA swimming. Any coach or staff that has been there a while is infected and part of the problem. Time for new blood. Hit the reset button or history will repeat.

Anyone associated with SCSC at this time has no confidence in the board of directors and all the confidence in the coaching staff who continue to have success with kids in the pool. Hopefully the membership will have the final say and not BIG FAN.

3 of the current board members were there for the John Bitter debacle. They drove another coach away after less than a year. 2 of them don’t have kids swimming on the team and the 3rd has a Senior in high school. Do you really think that they are on the board to make the club better? The coaches who have stayed are there every day for our kids and the team. Other than showing up for a membership meeting, the current board is operating in the shadows. They are untrustworthy and need to be replaced ASAP. Big Fan has it all wrong.