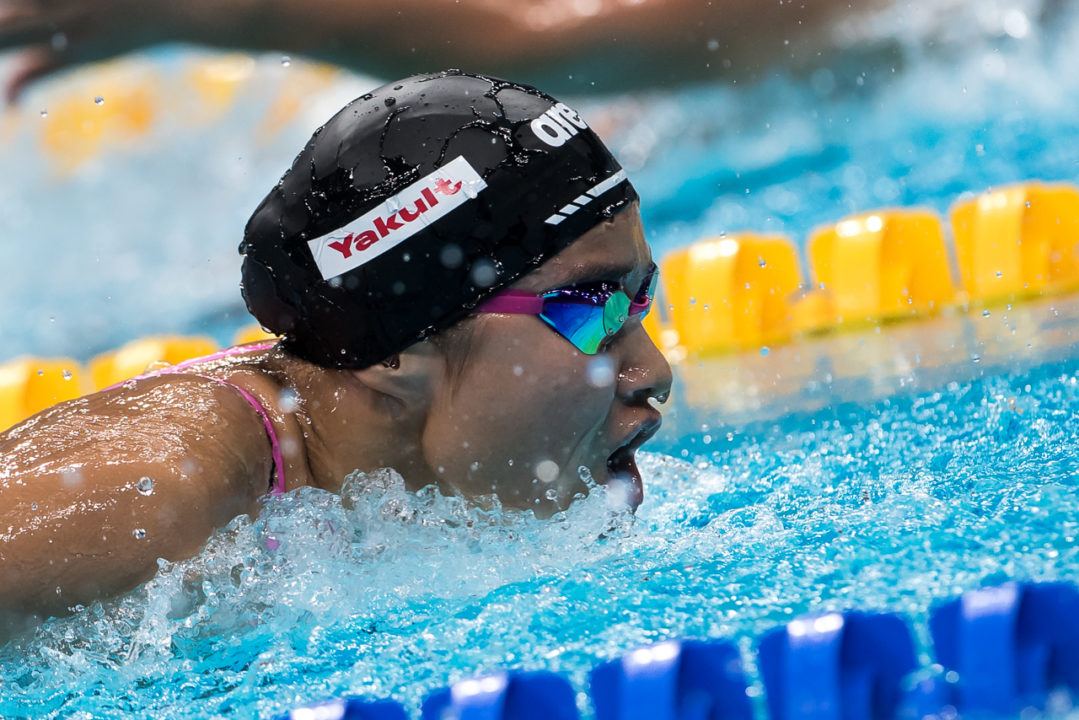 Hiroko Makino produced the #6 200m fly time in the world to add her name to Japan's roster for this summer's World Championships. Archive photo via Peter Sukenik/www.petersukenik.com

16-year-old Miyu Namba continues to dominate the women’s mid-distance events, doubling up on her 400m free victory from night 1 with another gold in this 800m event.

Namba accomplished the same pair of wins at the Japan Swim back in April, earning a victorious time of 8:30.62 in the longer distance. The teen clocked a near-identical mark this evening, topping the podium in 8:30.56 to clear the field by over 3 seconds.

A time of 8:25.22 is what was needed to qualify in this race for the World Championships, but the fact Namba is producing solid swims that are continually improving is a good sign for this young, emerging Japanese athlete.

Matching her exact same time from April’s Japan Swim was Natsumi Sakai, who took tonight’s 50m backstroke final in a mark of 28.18.

Knocking .09 off of her previous swim from April to upgrade from bronze to silver this time around was Miki Takahashi, who claimed runner-up status this evening in 28.40. Emi Moronuki rounded out the top 3 in a mark of 28.55, although all 3 women fell short of the 27.51 QT needed for this summer’s World Championships.

In a ridiculously close men’s 50m backstroke race, the top of the podium hosted 2 swimmers in the form of Kosuke Matsui and Masaki Kaneko. The pair tied in a mark of 25.48, with runner-up Lee Juho of Korea narrowly missing out on 3-way tie, touching the wall just .01 later in 25.49.

Tonight’s field was without Olympic veteran Ryosuke Irie, the man who won this race at the Japan Swim in April. There, Irie notched the only sub-25 second outing in 24.95, while Kaneko won silver in 25.37.

A mark of 24.56 is what the Japanese Swimming Federation set as the QT for Gwangju for this non-Olympic event.

In another positive sign for Japanese women’s sprinting in the absence of Olympian and national record holder Rikako Ikee, 5 women once again dipped under the 55-second threshold in the 100m freestyle final.

That was the case in the race back in April at the Japan Open as well, with the pack there led by winner Tomomi Aoki and her gold medal-garnering swim of 54.45.

As such, in a span of just months, 21-year-old Omoto has found a way to slash over half a second off of this 100m free sprint. Omoto’s 54.18 keeps the freestyle ace as the 4th fastest Japanese performer eve in the event.

Not to be lost is the fact that several other women stepped it up as well, with Rio Shirai and Aya Sato both punching the wall in 54.55.

A fiercely quick 53.65 is what is required to make the World Championships squad individually, with the collective relay QT sitting at 3:37.68. Adding up tonight’s times, the women fell short of the standard with a top-4 tally of 3:38.10.

The men’s 400m free was rather disappointing, with just 1 swimmer dipping under the 3:50 threshold when others have proven in the past they’re capable of doing so.

At the 1st World Championships qualifying meet of the Japan Swim, Ehara finished with the silver behind winner Yoshida Keisuke, with Ehara touching in 3:48.07. Although he upgraded to gold tonight, his time was almost a second and a half slower.

In terms of World Championships qualifying, however, the time differential didn’t make a difference, as a stiff 3:45.89 is what was needed to punch a ticket to Gwangju.

In another super close finish, Olympian Suzuka Hasegawa got her hands on the wall to take the 200m fly crown in a solid mark of 2:07.26. That beat out a charging Hiroko Makino, who cranked out 2:07.32 for silver.

Hasegawa has already qualified for the World Championships in this event with the 2:07.21 she produced in April, so the fact she still raged on to a time within .05 of that outing is a good sign for Gwangju. Her 2:07.21 remains ranked 5th in the world this season.

Tonight, the Hungarian multi-Youth Olympic Games gold medalist turned up the heat, clinching the top prize ahead of the Japanese racers in a winning 1:54.71. Milak fired off a quick 53.93 opener, the fastest first 100 by almost a second, and closed in 1:00.78 to produce the 1:54.71 effort.

On-fire Milak has already been as fast as 1:53.19 this year to claim his World Championships roster spot at the Hungarian Nationals in March. That time represents the fastest outing in the world this season.

Finishing with the bronze this evening was Masato Sakai, the man who reaped silver in Rio behind Michael Phelps, just hundredths off of the gold. He clocked 1:55.78 tonight.

In 2018 Sakai underwent surgery to address a Ganglion cyst affecting one of his shoulders. The issue caused the swimmer pain and hindered his swimming, rendering Sakai off of the Pan Pacs and Asian Games rosters for Japan.

For Sakai, however, a minimum mark of 1:55.55 was needed to qualify for the World Championships in this event, so it appears Seto will be the sole Japanese racer in the event come Gwangju.

With Pan Pacs double gold medalist Ohashi already having qualified in this race and selecting to focus on the 200m fly tonight, the women’s 200m IM saw Shiho Matsumoto take gold in 2:12.85.

Matsumoto was the only swimmer under 2:13, as Mei Ishihara and Sao Yokoto wrapped up the other 2 podium spots with 2:13.30 for silver and 2:13.81 for bronze, respectively.

With dominant Seto not swimming this event as he’s already qualified for the World Championships, Keita Sunama got his hand on the wall first in tonight’s 200m IM final.

For Watanabe, tonight marks the 22-year-old’s first time ever under the 2:00 threshold in the event.

Australia is very interesting, too. As we know every country has to use at least FINA “A” (and “B” cuts when they have none “A” cut swimmer in that particular event) and the period that is written. But some countries are thinking differently according to needed times or events those are not at the Olympics. I think they aren’t doing it too providently. Where can somebody learn how to race internationally before an Olympics if not at the Worlds. But as you can read from Bobo Gigi France doesn’t need more tourists. My opinion is a bit different. If you don’t invest in the future you will lose your present.

I have no idea what kind of fly or back Watanabe has, but something tells me we’ll see at least a 1:57 IM from him before he’s through. He may, like Mitch Larkin, gradually morph from a stroke specialist into an IMer. (In a way, it’s easier to improve your IM than it is your best stroke, since there are always more things to work on.) At the moment, it appears that any further improvement in his 200 breast is limited by his his speed. (How much faster than a 2:06.67 can you go when your best 100 breast is right around a minute?) He’s actually approximately as close to the WR in the 100 free (his 49.80 is 2.9… Read more »