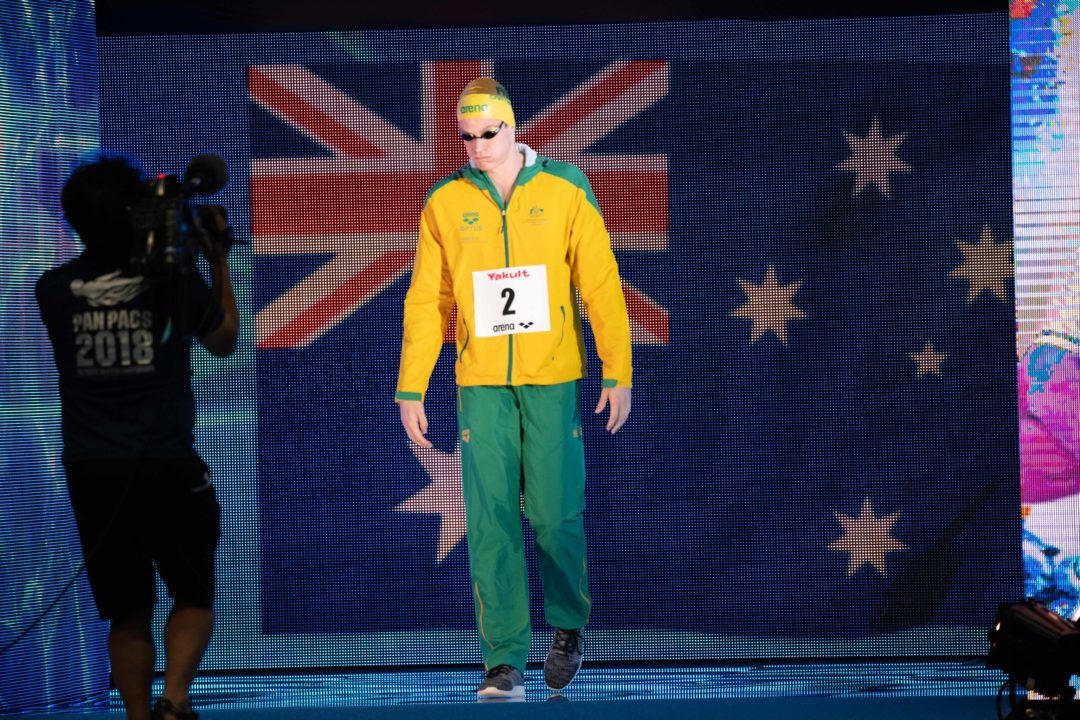 Sprint ace Jack Cartwright was only entered in the men's 1500m free, an off-event at that, at Aussie World Trials. We now know why. Archive photo via Mike Lewis/Ola Vista Photography

As noted in our review of the start lists for the 2019 Australian World Swimming Trials, which begin on Sunday, sprint ace Jack Cartwright was only entered in the men’s 1500m free, an off-event at that. Aussie media was initially under the impression this was simply a mishap with entries and the 20-year-old Commonwealth Games gold medalist would indeed appear in the 50m, 100m and 200m free events days later.

With Cartwright’s name still just appearing on the 1500m once the heat sheets were released, we reached out to St. Peters Western and Swimming Australia for any possible explanation. Per the St. Peters Western coaching staff, Cartwright is, for all intents and purposes, out of the Aussie World Swimming Trials meet and, therefore, out of the World Championships, due to a lingering shoulder issue.

Cartwright has been struggling with shoulder pain for some time and is currently swimming as part of rehab, following a cautious plan to keep him healthy for his journey to Tokyo 2020. This may or may not include actually swimming the 1500m at Trials. The staff says he will continued to prepare for the 100m and 200m free, with his training under close supervision to ensure he is ‘right’ for next year’s Olympic Trials.

Not only does Cartwright’s absence in Gwangju impact the Australian team in terms of a possible individual 100m/200m free qualifier, but it severely impacts the men’s relays as well. Particularly the men’s 4x100m free, paired with the fact that 2-time World Champion James Magnussen already announced his retirement earlier this week.

With Olympic champion Kyle Chalmers essentially a shoe-in for the men’s 4x100m free relay, the additional spots now appear to be a fight among the likes of James Roberts, Cameron McEvoy, Clyde Lewis, Zac Incerti, Alex Graham, Louis Townsend, Elijah Winnington, and any number of dark horses that may emerge.

The 4x200m freestyle relay will see much of the same crew battle it out for individual and relay spots, with additional names Mack Horton, Thomas Fraser-Holmes, Max Carleton and Jack McLoughlin thrown into the mix.

I was right . Whilst shoulders are always on the cards , it was his heart episode that led me to think he was just doing aerobic work . I still think,this is the case .& they are not admitting it .

Im not surprised as the mind does not like what it thinks are near death experiences .. I don’t understand why they did not go for surgery. He would hsve been back to training by now & no sore shoulders .

It’s a bold move Cotton, let’s see if it pays off

Clyde Lewis,Graham , Winnigton, Roberts all are capable of doing 48 low splits. May be Brinkworth and Incerti can do the same. However, they need Cam in big time. 47 low to mid relay split is much needed. But i still trust him to overcome his recent struggles and do well in the trials and champs.

Zac has seemingly severe back issues.. Ash has come down 1.5 secs but its too muchto expect further drops .
I think its Alex’s opportunity to grab ..

Bad luck or other matters continue to hinder the best possible career for too many Australian talents, at least from Eamonn Sullivan. Quite a lot of names, beyond the most famous (Magnussen, Roberts, McEvoy): for instance, at Junior Worlds 2013 the 50 free was won by Aussie Luke Percy (22.14), ahead of Russian Evgeny Sedov (22.19) and only third was Caeleb Dressel (22.22). Four years later, Dressel dominated the Worlds, while Percy and Sedov were absent.

Everyone has different peak abilities and potential ceilings

Yes, but peaking in the 50 free at 18 is virtually impossible. And considering the starting wedge and new training methods (i.e. the continuous Swimming progress) after 2013, even more. Agree that motivations are the most important thing, but for an issue or another, remains the fact that several Aussie talents don’t have the swimming career they could.

Luke went to Tennessee for one year . Next he has shoulder surgery . . Hopefully he is pain free & has full function .. That’s it folks unless he wsnt to say more .

I think they learned their lesson from 2015….

Considering how safe they were with even the womens 4×100 free heat in rio, I’d say they learnt their lesson

Some guys would need to step it up at Trials if Australia is to qualify a sprint relay team for Tokyo Olympics .. charmers can’t swim all four legs lol

he is not wrong , Team Australia on the men’s side is in trouble with the 400 free relay ( not the 2 other ones thankfully )

Well.. qualify for OG will be easy even without cartwright. at least it should be

i have to wonder if he failed a drug test and maybe his coach also haha.

People wondered why Madison Cox wasn’t entering any meets last year. He should have disclosed the injury earlier if he doesn’t want speculation like this.

Thanks for the philosophy lesson. If Kevin Durant sat on the bench the whole NBA final and no one told us why it would not go over well with the fans. Maybe you can figure out what I am trying to say.

Again these are athletes these are their lives not ours. It really doesn’t affect us in any way so I mean.

These athletes have lives and their injuries are there’s to deal with, not ours to constantly know about. It’s their life they don’t need to tell us anything if they don’t want to

“One of our best sprinters has been suffering a bit with shoulder pain. Should we dock his lineup a bit at Trials?”

“Good idea. Let’s enter him in one event, give him a light load but keep him racing. Probably an event that isn’t too abusive on the upper body.”

As absurd as that sounds, I actually did the same thing in college. I tore my labrum and was out for a bit during the fall semester. When I got back into it I had trouble lifting and doing all out sprints so I started transitioning into a distance swimmer. Obviously the mile is more painful than the 100, but it’s less torque on the joint and I wasn’t afraid my shoulder would come out of the socket. After that I had a pretty decent career as a distance swimmer.