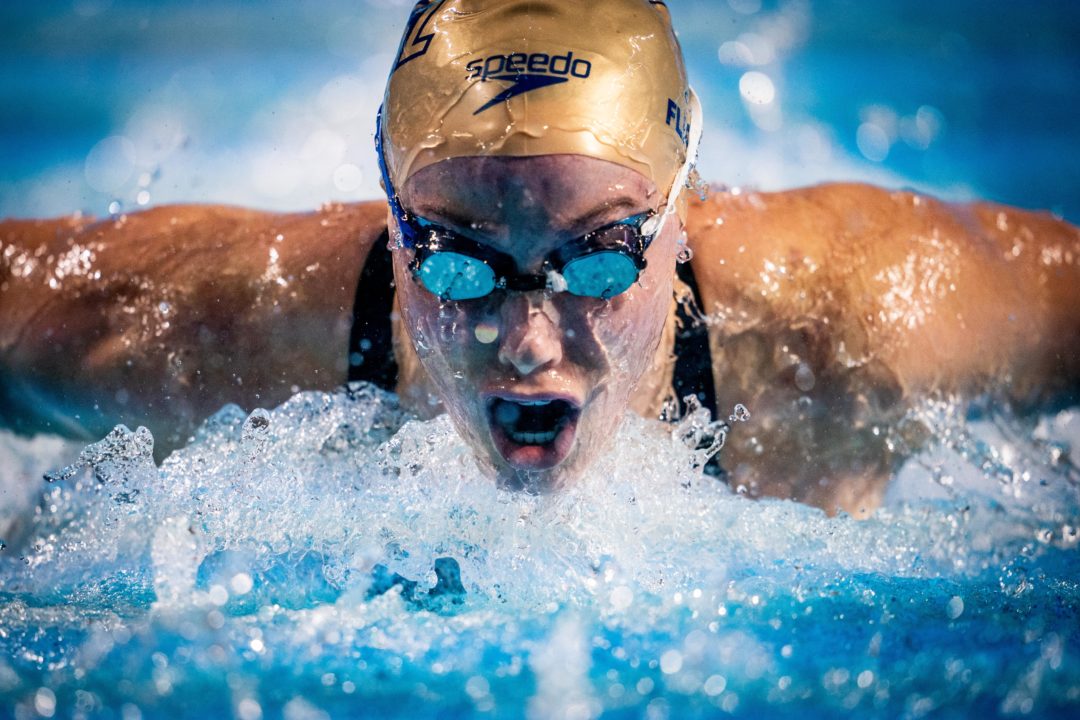 Coming off of winning two medals at the Tokyo Olympic Games, Flickinger details what it took to get there amidst the pandemic and moving to Arizona. Archive photo via ISL

From blowing bubble rings to watching Olympians race, Cody Miller’s YouTube channel has it all. Miller looks at his success and the future of swim media.

3-time Olympian Elli Overton And The Impact Of Olympic Media

3-time Olympian Elli Overton unpacks her experience as an elite swimmer managing the ups and downs of Australian media coverage.

What Is The Future of Cody Miller Adventures?

This year, 20 years of swimming began paying off for Hali Flickinger.

The swimmer – who had competed with Georgia and finished seventh in the 200 fly at the Rio Olympic Games – returned to the Olympics in Tokyo, this time taking home two bronze medals in the 200 fly and 400 IM.

More recently, this Team Speedo Athlete has been competing for the Cali Condors in the playoffs of the third season of the International Swimming League. Though she didn’t compete in the 2021 regular season, in 2020 she ranked 13th overall in MVP rankings after competing in the entire season.

But her recent success hasn’t been easy, and like many other swimmers, Flickinger has had to battle mental health challenges related to the pandemic and her switch in 2019 to coach under Bob Bowman and Sun Devils swimming. Flickinger sat down with SwimSwam to discuss her swimming and what her life will look like in the future.

For much of her professional career, Flickinger has been surrounded by Olympic ambitions.

Flickinger joined Georgia’s team after the 2012 Olympics, and she said she grew up physically and mentally as a part of that program. Flash forward, and she participated in Trials for the 2016 Olympics as a member of the Bulldogs. She ultimately made the team, and said she thought that was her ultimate goal, but soon realized otherwise.

“I realized I wasn’t happy. What I came in thinking was my goal ended up not being the goal,” Flickinger said. “It was really interesting to look back at it and think about it. My perspective really changed over the week where I was competing at the Games.”

Flickinger said she wanted more for herself than just making an Olympic team. In the interval between Rio and Tokyo, she worked with a confidence coach and ultimately left Athens for Arizona. After the COVID-19 pandemic delayed the Games, Flickinger returned to Trials in 2021 after earning more Wave II cuts during the qualifying period than any other swimmer.

At Trials, she broke the U.S. Open record in the 200 fly, defeating Regan Smith to take first. But according to Flickinger, the 400 IM was her most difficult race at that meet. In a three-way race that came down to the final strokes, Hali Flickinger edged out Melanie Margalis to earn second.

“I’ve never worked a swim as hard as I’ve worked that one,” Flickinger said. “Most of the time when I finish you can tell I’m not really breathing hard, but that one, if I had to get out of the pool right away, I wouldn’t have been able to walk.”

That last 50, which secured her spot as second, was a result of her finally understanding Bowman’s coaching, Flickinger said. She said her legs started kicking the way they did in practice every day, and while she was swimming she thought of Bowman’s insistence that she works harder than everyone else.

In Tokyo, Flickinger, 27, earned two bronze medals in those two events. But she also had a Speedo Make Waves moment outside of the pool in her “old ladies suite,” consisting of Flickinger, Simone Manuel, Katie Ledecky, Lilly King, Allison Schmidt, and Natalie Hinds, the oldest American women competing in the sport.

Flickinger said the conversations she had in that suite reminded her of why she’s still swimming, and the community she’s built over her time in the sport. She said that no one else knows what they go through more than other swimmers, and that she’ll remember those moments more than her times in the pool.

“That week we were all able to lean on one another, and that’s why I think we all do this sport,” Flickinger said. “We meet people and friends like each other that we will take past this sport that we can lean on in the lowest of times.”

Building Confidence and Battling the Pandemic

After the 2017 World Championships, Flickinger began seeing a confidence coach to help align her mental health with the physical work she’d been putting in for years. In 2018, she said that mental work started to pay off after ripping a U.S. Open Record in the 200 fly during a prelims swim.

“Definitely that morning swim was when I thought, ‘Okay, there is the hard work starting to creep in.’ I knew that wasn’t my potential, I knew there was much more,” Flickinger said. “After years upon years of hard work, and everyone telling me to ‘be patient, be patient,’ I started to see a glimpse of it. I started to have a little more confidence in myself.”

Flickinger’s ongoing struggles with confidence not only prompted her to see a confidence coach in 2017, but also prompted her to switch coaches in 2019. She said she was disappointed with her progress at that point, and that she needed a change. She opted to swim under Bowman, who’s long list of coaching successes include Michael Phelps. She said Bowman pushed her past her limits, and she was seeing the results in the pool she always wanted to see.

“I was in the best shape physically and mentally in March 2020,” Flickinger said. “It was all so fresh. I wasn’t thinking, I was there. The Hali Flickinger I wanted to be and knew I could be was there.

“And then it all shut down.”

Flickinger said the onset of the pandemic was difficult, especially since she had just made a change and began seeing the results she wanted. To try and compensate, Flickinger said she did everything possible, from swimming in an endless pool to training with an age group team. That cumulative stress, though, is now catching up to her.

She said she pushed “a little too far,” and even though she has two medals to show for it, they weren’t the medals she wanted. She added that talking to people who know her best and that she feels safe with has been the best way to navigate her mental health.

“I feel like if you keep it inside, it’s no good,” she said.

Flickinger said that she’s been a distance swimmer a long time, and throwing in a pandemic was “a lot.”

“It’s something new, and we’ll see what happens,” Flickinger said about her struggles and her work to strengthen her mental health.

Finding a Home in Arizona

Flickinger said her decision to leave Georgia coach Jack Bauerle wasn’t due to her not liking Athens or the team, but instead the feeling that she needed to switch things up.

“I could’ve easily gone the easy way and stay in Athens,” Flickinger said. “I was leaving the coach that officiated my wedding to go train somewhere I’ve never been before.”

Flickinger said she had barely spoken to Bowman before heading to Arizona, but that she knew herself well enough to know this was the change she needed. Now, she said she’s just looking to swim a time (and hopefully earn a gold medal) that she can look at and say that her 20 years of training was worth it.

As a result, she’s not concerned about the World Record or the splits other people swim, because they’re things she can’t control.

Arizona is now home for Flickinger, and she said she enjoys living away from the pool where she’s removed from the world of swimming and lives a more balanced life. She said she’s licensed to practice real estate in Arizona, and her husband, fellow Georgia swimmer Martin Grodzki, currently practices there.

“We’ve established our roots there, and I think that’s where we’re going to stay,” Flickinger said.

Speedo is a SwimSwam partner. See their HQ here.

The women’s 400 IM at the Olympic trials was a tremendous battle between the top 4. I’ve watched the video of that race many times.

Hali summoned a final burst of energy with about 10 meters to the finish to pass Margalis and get the second spot. She says that race was her proudest moment. It was clear to anyone watching that she had dug deep. What a gritty performance.

I know the term is a cliche, but Hali is one tough cookie.