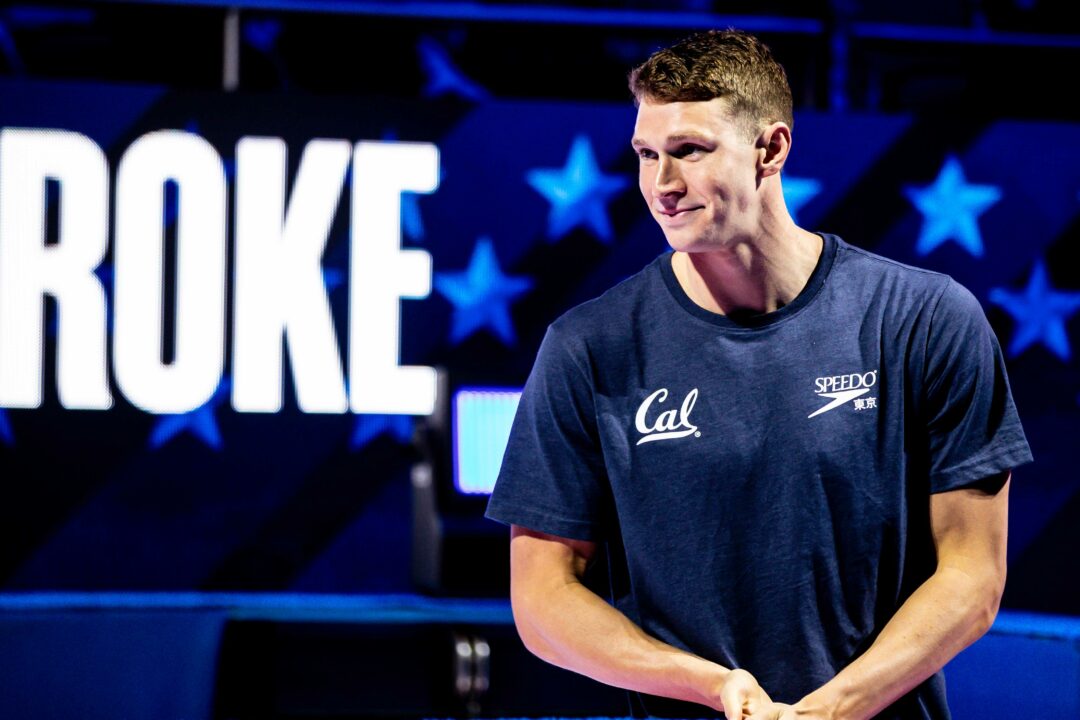 Murphy sat down with the SwimSwam podcast to discuss his recent performance in Indy, his plans through 2023, and whether he'll compete in 2028. Archive photo via Jack Spitser/Spitser Photography

Four-time Olympic gold medalist and Team Speedo Athlete Ryan Murphy has been busy, recently winning two bronzes and a silver at the Indy World Cup stop in November. Murphy sat down with the SwimSwam podcast to discuss his most recent performances and the upcoming Short Course World Championships in 2023.

“One Foot in Front of the Other”

Murphy said that it’s still early in the season for him after his World Cup performance. After returning to the pool in early September after a small break and a couple of surgeries, Murphy said he knew he wouldn’t have a ton of time to rest for the Indy meet. Instead, most of his training would be geared for July 2023, for the 2023 World Aquatics Championships in Fukuoka.

“The season is very much one-foot-in-front-of-the-other and I’m keeping that mentality all the way through the summer,” Murphy said.

He added that he was pretty happy with how the Indy meet went, and that it helped him get back into racing shape with the good competition. For example, competed against Dylan Carter, who narrowly won the 50m back; and Shaine Casas, who won both the 100m and 200m back.

Murphy said that he enjoys the big meets, and it’s why he swims. In fact, he dislikes backstroke in the sense that he’s never able to anchor a relay.

“The adrenaline is better than anything I’ve ever experienced,” Murphy said. “I’d love to have a backstroke relay I could anchor one day.”

It’s a good thing Murphy loves big meets, because he’s swam in almost all of them. He broke down the comparisons between the FINA World Cup competitions–of which Murphy is a regular staple–and ISL competitions. Murphy has competed for the LA Current ISL team.

Above all, he said, both meets increase opportunities for swimmers, which has always been Murphy’s biggest stance. But he said the real preference comes down to if you prefer individually focused meets or team-focused meets.

“There’s more pressure when you’re swimming within a team environment,” Murphy said. “Pressure and excitement are kind of the same thing for me. I get really excited when people are depending on me to win races, score points for the team…I think the quality of racing was probably better at World Cup.”

In general, Murphy said he doesn’t want to watch a sport that’s not directly head-to-head, with individuals or teams competing directly with each other. In this sense, he’s glad the whole sport is improving, including the technology used to record the swimmers for television.

“It’s a Great Opportunity to Race”

Currently, Murphy’s focus is on short-course World Championships in December, which will take place in Australia. Thanks to Cal’s unique academic schedule, the team trains a little bit closer to winter break, and Murphy noted that it’s a hard, but good, time of year to compete.

“It’s a great opportunity to race, December is always kind of an interesting time,” Murphy said. “Cal’s semester goes a little bit later than other schools, the last two weeks before Christmas, the guys and the girls have their study week and finals week, so there’s just a lot of moving parts. It’s just a hard time of the year, so I like the timing of World Champs as a good way to stay locked in, and then also really keep me engaged in practice day-to-day. It’s fun to have a bigger-level meet like that to look forward to, and it increases urgency to push the practice as hard as I can.”

He said that the timing of the meet creates a natural, mid-season rest, and that the travel time alone down to Australia will build in some rest.

Looking ahead to 2023, in addition to his focus on July Worlds, Murphy acknowledges that it will also be a pre-Olympic year.

“There is certainly a point in the Olympic year, in 2024, where it’s like, ‘honestly all I can do right now is mess this up,’” Murphy said. “I definitely think of it in that way, but until that point, there’s always things you can be doing to improve.”

On top of everything else, Murphy met the new FINA leadership recently, and he spoke on the organization’s willingness to get a lot of people in the same room to meet each other and open lines of communication.

Those lines of communication could be increasingly important as the organization decides whether to let Russian and Belarusian swimmers compete in future meets. Murphy said that the competitor in him wants to let everyone compete, but he also understands the layers of decisions that go into figuring out who can compete.

“It’s a situation where there are a lot of mixed feelings,” Murphy said. “On the competitor side, I’m like let’s race anybody, but trying to be empathetic to the people who make those decisions, that’s where my head goes. If I was the decision-maker, what are all the things I have to consider? And there’s a lot of things–I don’t envy the final decision-makers on that.”

Will Murphy Compete in the 2028 Olympics?

Isn’t that always the final question? Murphy, despite his love of a good plan, is playing this decision more by ear, but he admits that he gets chills thinking about competing at a home Olympics.

Murphy said ultimately his goal is to have a couple of great options lined up for his future, then getting to choose between it, and figuring out the bridge between his swimming career and post-swimming career is key.

“I try to think of things as simply as possible: What do I really love about swimming that I want to carry into my next career and what was I really good at in school that can translate to a career?” Murphy said. “I’d love to swim forever and I’d love for it to be financially viable, but there are so many things to consider with that conversation.”

He’s already making some moves for his future by marrying Bridget Konttinen in 2023. Konttinen was a college athlete, and Murphy said he knows the couple will always be active, regardless of when he decides to retire.

Another factor weighing on him is his pressure to start his adult life. The last time he was on the podcast, Murphy discussed his desire to work in the venture capital industry, and the work he’s done to build those connections.

“It’s always natural to look at what your peers are doing, what your friends are doing, and think that you should be doing the exact same thing,” Murphy said. “But it’s really as simple of a conversation that if I text my friends and ask them to complain about their job, I’ll get a reply and I’ll get their honest feedback. I do feel really fortunate to be able to swim, to do this at a high level and still be really excited about it.”

Thank to SwimSwam partner Speedo for supporting this podcast.