Itching for Another Documentary about Swimming? “Swim Team” Is Here. 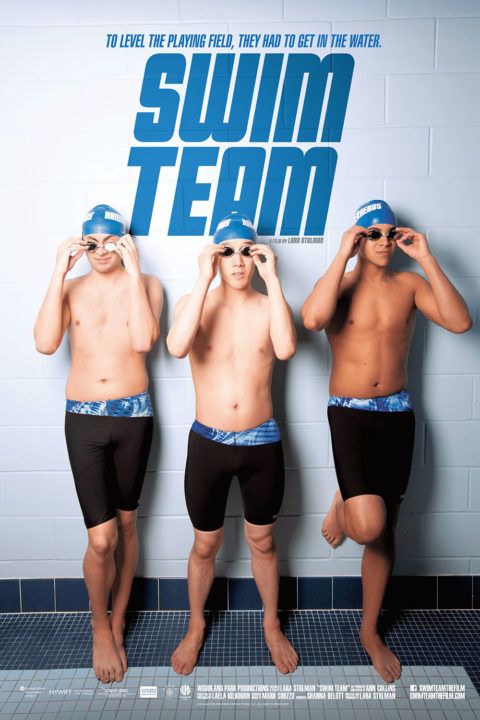 Demonstrating the power of inclusion to transcend disability, "Swim Team" profiles members of the Jersey Hammerheads, a competitive swim team made up of a diverse group of teens on the autism spectrum, based in the state with the highest rate of autism in the country. Current photo via SwimTeamtheFilm

Following the monstrous success of recent swimming-related documentaries like Touch the Wall and The Last Gold, many swimmers, coaches, and teams are hungry for the next inspiring, heart-wrenching film to come along and make them laugh, cry, and shout “KICK!” at the screen.

Now, SwimSwammers, your wishes have been fulfilled.

On Thursday night, Swim Team made its New York premier at the world-renowned Doc NYC film festival. The feature documentary covers the rise of the Jersey Hammerheads, a team made up of a diverse group of largely Latino and Asian teenagers on the autism spectrum.

The film follows three of the team’s star athletes, boys on the cusp of adulthood as they face lifetimes of exclusion and dependence. But everything changes when they come together as a team with parent coaches who hold their athletes to a high standard.

Over the course of the year that director Lara Stolman (you can read our Q&A with Lara here) spends with the boys, each faces his own unique challenges in the transition into adulthood.

Soft-spoken and passionate Mikey McQuay Jr. is a high school senior who falls significantly below grade level in his schoolwork. His parents, who also coach the Hammerheads, fear for his ability to get a job after graduation. Mikey’s ambitious fellow team captain, 16-year-old butterflier Robert Justino is unaware of his autism diagnosis, and his mom searches for the best way to break the news. Meanwhile, 22-year-old Kelvin Truong has “aged out” of services from his school district, and swimming becomes the best way to manage the tics and aggression that come with his double diagnosis of autism and Tourette’s syndrome.

To watch the film and follow Mikey, Robbie, and Kelvin in and out of the pool is to fall in love with them. The film’s natural arc is one most swimmers and swimming families will be very familiar with, starting with the first day of practice and moving up through invites, state, and (with a bit of luck and training) Special Olympics Nationals. Scenes of heartbreaking disqualifications and grueling practices, and, in particular, a vignette of a late swimmer sprinting into the natatorium in his cap, goggles, and jammers will resonate with swimmers, coaches, and swim families alike.

Fans of Swim Team include 2013 200 fly national champion Tom Luchsinger, who attended the New York premier. Luchsinger, who volunteers with Pathfinders for Autism in his spare time, found that the film reflected his own family’s experience.

“A lot of people may or may not know this, but I have an autistic sibling,” Luchsinger said. “Watching the film for the first time tonight, I got super emotional… My family and I know what it’s like to be frustrated with social security, with the school system… It’s a really frightening and frustrating thing to go through.”

But, the ultimate message is hopeful. Hammerheads coach Mike McQuay Sr. finds that, for athletes on the autism spectrum, swimming can be a bridge to something even more important.

The filmmakers are in the middle of launching a grassroots community screening campaign across the country. Belott says that film screenings would be a natural fit for “schools, churches, community centers, and homes.”

It would also be an ideal fit for your next team event.

To host your own screening of the film with your team, school, community center, YMCA, or community group, look here on the documentary’s website. Swim Team will also be playing at the Monmouth Film Festival in Red Bank, New Jersey on Saturday, December 17th. You can purchase tickets here.

TO SCHEDULE A SCREENING OF SWIM TEAM, LOOK HERE.

Robert was the cool guy.but don’t call him Robbie cause he grow up.he should not go back to special olympics cause is was too easy for him.he was strong swimmer.he have to join the toughest swim club and he will become more stronger swimmer

Robert was a great guy but everybody don’t like when people call him Robbie he grow up.everybody should call him normal name.he should not go back to special olympics cause you know he is a strong swimmer.he have to join the toughest swim club in the world.one day he will become the fastest swimmer.

Very interested in seeing this. I’m a mom of two boys, one one the spectrum. However due to increasing pressure of middle school combined with the challenges and of puberty and autism, my son developed such debilitating anxiety we had to withdraw from the sport he loved. It got to the point that even walking into a pool caused a panic attack. Hope that seeing others’ success will help him remember why he loved this sport and remind him that the water will always be there.