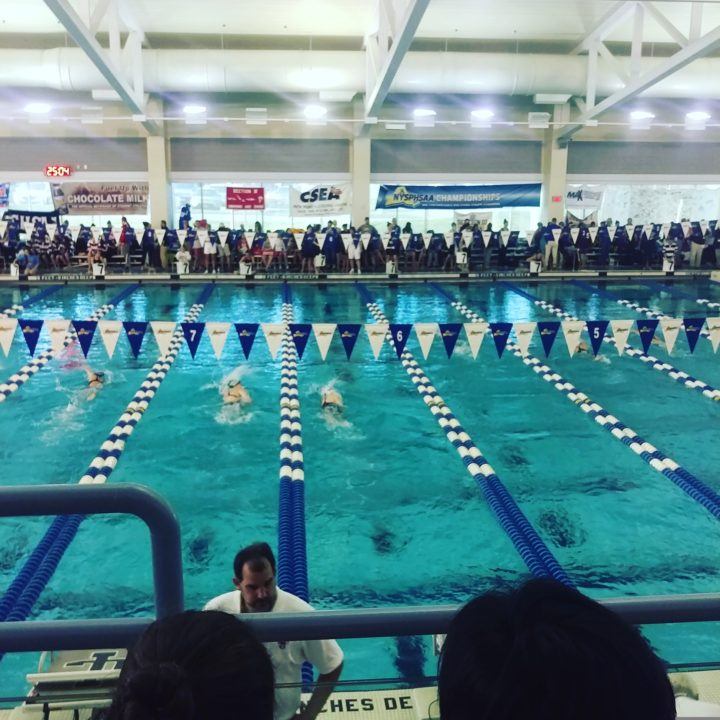 Finals started off with a bang in the 200 yard medley relay. The Long Beach team of Kristen Romano, Margaret Areosty, Caroline Farrell, and Joan Cash took first place with a time of 1:43.21, breaking their own New York state record of 1:44.02 which was set just yesterday at prelims and automatically qualifying for All-American status. Orchard Park followed in 2nd place with a time of 1:45.93, and the top three was rounded out by Fox Lane with a time of 1:46.48. Fourth place went to Bellmore-Merrick at 1:47.07. All three teams qualified for All-American consideration.

In the 200 yard freestyle, first seed Lindsay Stone took home the gold with a new state record and automatic All-American time of 1:47.39. Northport freshman Chloe Stepanek came in second, touching the wall in 1:50.85.

Margaret Aroesty came from second seed to win the 200 yard I.M. with a time of 1:59.51, more than three seconds faster than her prelims time of 2:02.92 and good for automatic All-American qualification. Orchard Park senior Olivia Sapio took second with a time of 2:02.29. Third place went to Josephine Panitz at 2:03.56, while fourth was taken by Molly Craig with a 2:03.90. All three girls’ times qualified for All-American consideration.

Pelham sophomore Katherine Douglass posted another automatic All-American time of 22.31 in the 50 yard freestyle, just .1 seconds shy of her prelims time. She was followed by Serafina Viola of Penfield at 23.47 and Becca Evans of Pittsford at 23.64. Both Viola and Evans qualified for All-American consideration.

Long Beach senior Kristen Romano dropped just over two seconds from her prelims time of 55.20 in the 100 yard butterfly, touching the wall in 53.13 for a new New York state record and automatic All-American cut. Three other finishers qualified for All-American consideration. Olivia Sapio of Orchard park came in second at 55.00, Megan Deuel of Pittsford took third with a 55.59, and Katrina Wardner of Orchard Park took 4th in a time of 55.66.

The 200 yard freestyle relay featured an upset of first seed Pelham by the relay from Pittsford made up of Becca Evans, Emma Corby, Lindsay Stone, and Megan Deuel. Pelham was anchored by 50 yard freestyle champion Katherine Douglass, who put down a split 21.83 to nearly catch Pittsford on the last leg. Both relays made the cut for automatic All-American. Orchard Park took third place with an All-American consideration time of 1:37.30.

Kristen Romano returned for the 100 yard backstroke, keeping her first place seed. Romano beat the rest of the field by almost three seconds and set a new New York state record of 53.36. She also earned an automatic All-American. Three athletes also earned All-American consideration in the event: Alyssa Helak took second place with a 56.06, Elizabeth Walsh took third with a 56.27, and Colleen Quaglia took fourth with a 56.35.

The 400 freestyle relay was a roller coaster as Pittsford and Long Beach battled on each leg. Long Beach started out ahead with Kristen Romano turning in a split of 49.47, but Pittsford quickly retook the lead. When Pittsford freshman Molly Brennan and Long Beach senior Margaret Aroesty hit the water as the anchors, they were separated by almost two seconds. Aroesty bested Brennan and a late challenge from Pelham’s Katherine Douglass by splitting a 49.80 to pull her team into first place. Just .58 of a second separated first place Long Beach from third place Pelham. All three teams made the automatic All-American cut.

What a meet! The fastest in New York State history with seven state records going down. The 400 free relay at the end was as good a relay race as you could ever hope to witness. Congrats to all the girls for putting on a fantastic show!

What a meet! The fastest New York State meet in history with seven records going down. The last event (400 free relay) was as good a relay race as you would ever want to witness. Congrats to all the girls for putting on a great show!