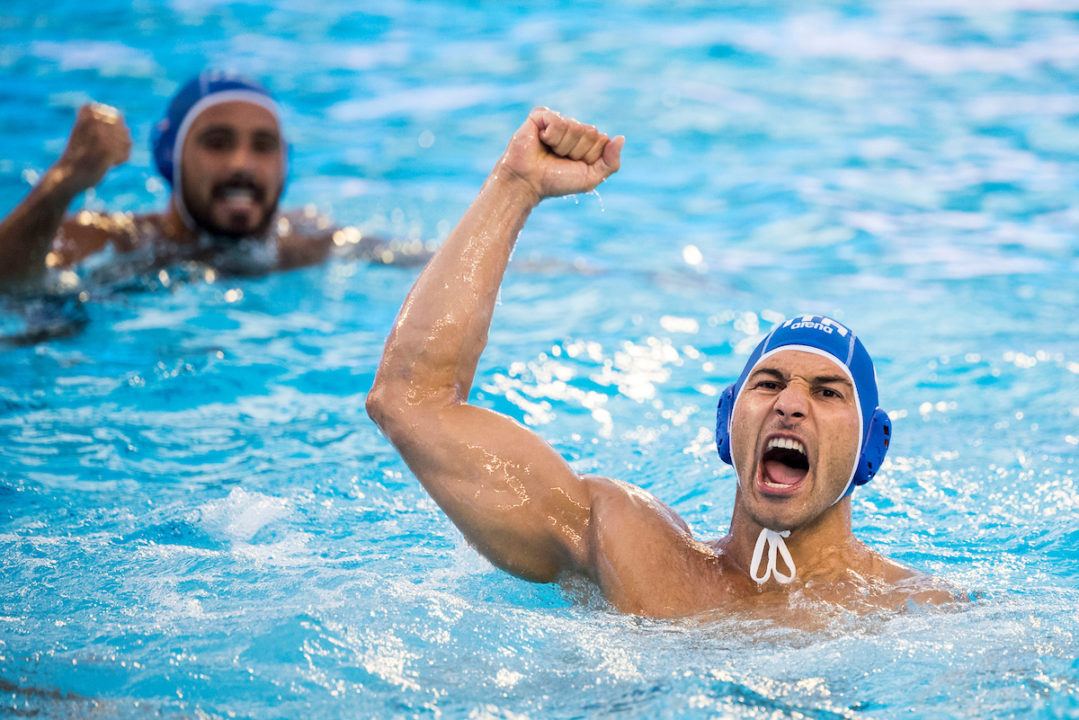 Italy captured its fourth men's water polo World Championship on Saturday with a 10-5 win over Spain. The Italians also won gold in 1978, 1994 and 2011. Archive photo via Andrea Staccioli/Deepbluemedia/Insidefoto

Italy captured its fourth men’s water polo World Championship title on Saturday with a 10-5 win over Spain. The Italians also won gold in 1978, 1994 and 2011.

The silver medal marks the best finish for Spain since a runnerup finish in 2009.

Croatia, the 2017 champs, rounded out the podium with the bronze medal, topping 2017 runnerup Hungary 10-7.

In other action, Serbia claimed fifth place with a 13-9 win over Australia, while Greece finished seventh with an 11-6 victory over Germany.

After splitting four goals in the opening period, Italy outscored Spain 8-3 over the final 24 minutes to grab the gold medal with a 10-5 victory.

A 3-0 run to open the second quarter helped Italy to a 5-3 halftime advantage. The Italians then poured in three more goals to kick off the third period to make it 8-3.

Michael Bodegas capped the scoring with a final goal in the fourth quarter, wrapping up the 10-5 win.

Croatia boasted a slim 6-5 advantage after three quarters, before pouring on four goals over the final eight minutes to clinch a 10-7 win over Hungary for the bronze medal.

Jokovic found the back of the net with an extra-man shot and a penalty to push the lead to three at 8-5. Balazs Harai and Gergo Zalanki countered for Hungary (8-7). Jokovic and Hrvoje Benic put the game out of reach with an extra-man shot and a 6-meter direct shot in a free-throw situation (10-7). Hungary had a shot blocked and missed another in the final two minutes.

Jokovic scored six goals to lead the Croatian charge, tied for the highest single-game output in the tournament (matching 6 other efforts). Croatia made 10 of its 25 shots, including 6 of 14 extra-man tries and both of its penalties.

Harai and Manhercz put in two goals each for Hungary as the team made 7 of 26 shots, including 6 of 17 extra-man tries and one penalty.

Serbia jumped out to a 6-1 advantage and held on for the 13-9 victory over Australia to secure fifth place.

Milos Cuk and Viktor Rasovic each scored twice as Serbia put in the first six goals of the game. Richard Campbell made an extra-man goal to put Australia on the scoreboard with three seconds left in the first quarter.

Serbia tacked on three more goals in the second quarter to make it 9-1, before Australia got a counter attack goal from Aaron Younger and a center shot from Lachlan Edwards to make it 9-3 at the half.

Down 10-3 with 6:38 left in the third quarter, Australia put together a 4-0 run, including a penalty and an action shot by Andrew Ford. An extra-man goal by Cuk and a counter attack by Rasovic stretched the Serbian lead to five at 12-7. Australia scored two of the final three goals, but came up short in the 13-9 decision.

Cuk and Rasovic put in four goals apiece for Serbia, while five other players chipped in a goal. The Serbs made 13 of 30 shots, including 5 of 10 extra-man tries and their lone penalty.

Younger and Ford each scored twice among seven scorers for Australia. The Aussies made 9 of 35 shots, including 4 of 10 extra-man tries and one penalty.

Germany scored the first two goals of the game, but Greece outscored their foes 7-2 in the second half to break up a 4-all tie en route to an 11-6 win for seventh place.

Action shots by Denis Strelezkij and Marko Stamm gave the Germans the 2-0 advantage six minutes into the game. Greece countered with an extra-man goal, an action shot and a 6-meter direct shot in a free throw situation, to go up 3-2 with 5:01 to play in the first half. Extra-man shots by Dennis Eidner and Julian Real had Germany level at 4 at the halftime break.

Greece broke the game open with six unanswered goals over the next 13 minutes to go up 10-4. Georgios Dervisis put in two center shots and an extra-man shot, while Alexandros Gounas added two extra-man goals in the stretch.

A Marin Restovic action shot and a counter attack by Stamm had Germany within four with 1:07 to play, but Alexandros Papanastasiou found the back of the net one more time for Greece to cap the 11-6 victory.

Dervisis notched a hat trick for Greece, while Gounas, Marios Kapotsis and Stylianos Argyropoulos Kanakakis added two apiece. The Greeks made 11 of 28 shots, including 4 of 9 extra-man tries. Goalkeeper Konstantinos Galanidis saved 73 percent of the shots he faced (16 of 22).

Stamm scored two goals to lead Germany, while four others chipped in a single score. The Germans made just 6 of 29 shots, including 2 of 4 extra-man opportunities.