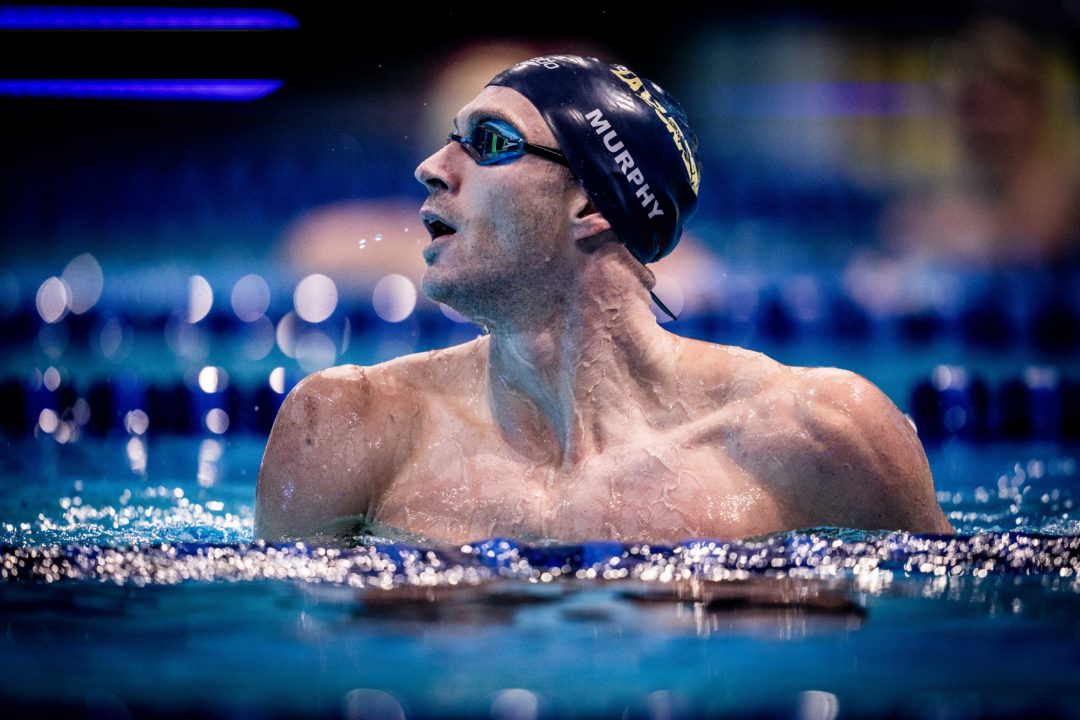 Ryan Murphy and Kliment Kolesnikov are both heating up into the postseason, setting up a key collision in the semifinals or final. Archive photo via Mine Kasapoglu

Sjostrom won six total events, swimming a very heavy event load for Energy Standard and proving that she’s fully returned from back pain that sidelined her for week 3.

Dressel also popped relay splits of 45.2 in free, 49.5 in fly and 45.7 in free, helping Cali win two relays. He currently leads the league MVP ranks despite not getting to swim a single skins race in fly or free. (He’s competed in breaststroke, at-best his third-best stroke, twice).

Like Dressel, Kolesnikov is clearly heating up as the season goes on. The Energy Standard backstroker has become one of the league’s top relay weapons with his devastating combo of back and free speed. In match #9, he split 45.4 and 45.6 on free relays and led off a medley relay in 49.21.

That’s in addition to an individual 100 back win (49.65) and a runner-up in the 200 back (1:49.26) in a 1-2 for Energy. Kolesnikov is currently the league leader in the 100 back by almost half a second, and we haven’t even seen him contest a 50 back yet – that might be Energy Standard’s wild card come the post-season, as he’s probably the biggest threat to beat Ryan Murphy in the backstroke skins.

Murphy also merits inclusion on our list. He has a league-leading three skins wins, dominating the 50 back for LA. Murphy destroyed a tough field this week, sweeping all three rounds of the skins for his third win.

Murphy is currently the ISL leader in both the 50 back (22.75) and 200 back (1:48.03), and sits third in the 100 back. Murphy went undefeated in match #10, winning seven total races, including all three rounds of the skins. He’s been a big reason why LA has yet to lose a men’s medley relay this year. And he’s currently 3rd in the league in season MVP points.

The world record-holder in the 50 fly, Santos has torn it up this season. He came right off his 50 fly win to win the first round of the skins – that’s a tough turnaround for anyone, much less a 40-year-old veteran. He very nearly held on to make the final, coming within .14 seconds of beating Chad le Clos (twelve years his junior) in round 2. Santos hasn’t been a one-trick pony, either. He was second to le Clos in the 100 fly (49.87) and swam on both men’s relays for Iron this week.

Vekovishchev has been a relay kingpin for London, coming up time and time again with his best swims on relays. This week, he split 46.0 anchoring a men’s free relay, along with a 49.30 fly leg of a medley. That fly leg even outsplit the great Dressel. Vekovishchev was also 1:42.3 in a 200 free in match #10, nearly handing Townley Haas his first 2020 loss in the event.

Carter came alive on day 2 for the LA Current, giving them a 1-2 backstroke punch that could have massive postseason ramifications. Carter swam the 50 back twice earlier this year, going 23.89 and 23.90. So when he suddenly took out his 100 back in 23.81 to his feet on a flip turn, LA got an inkling that something big could be around the corner. The Current entered Carter in the 50 back skins, where he beat out London’s dynamic duo of Guido and Diener, blocking both from the final and joining Murphy in an all-Current final. Carter was 23.28 in the opening round, a massive improvement. If he can keep that kind of speed, LA could be looking at a huge points haul in the men’s skins throughout the postseason.

Kawamoto did it all for Tokyo with seven swims in match #9. That was highlighted by a finals appearance in the skins – his second of the season. Kawamoto won the 50 back for Tokyo (23.10), tying Toronto’s Shane Ryan. He was also second in the 50 fly (22.37) and third in the 100 fly (49.96). Kawamoto had the field’s best fly split on the medley relay (49.4) and very nearly led a Tokyo upset of Energy Standard, making up half a second on le Clos during that leg.

Banic could have been on this list in previous weeks, too. She’s been a breakout star for Energy Standard, building the league’s best women’s butterfly group. Banic blasted a 55.84 in the 100 fly this week, taking second to Sjostrom. Energy Standard has the three best women’s 100 flyers in the entire league this year in Sjostrom (55.3), Shkurdai (44.6) and Banic (55.6). Most impressive for Banic this week, though, was a 55.8 butterfly relay split, outsplitting Shkurdai and helping Energy Standard go 1-2 over the field. The presence of Banic and Shkurdai means Energy can use Sjostrom on freestyle for two devastating medley relays. Banic was also 24.99 in the 50 fly, contending in one of the toughest fields we’ve seen in the league this year.

Tokyo’s Smith has not lost a 400 freestyle yet this year – and she’s gotten steadily better week-to-week. Here are her winning 400 free times between weeks 2 and 5:

Smith ranks #3 in the league this year. The league leader, Melanie Margalis, has returned to the U.S. and won’t compete in the postseason. And Smith beat #2 Siobhan Haughey head-to-head in match #9.