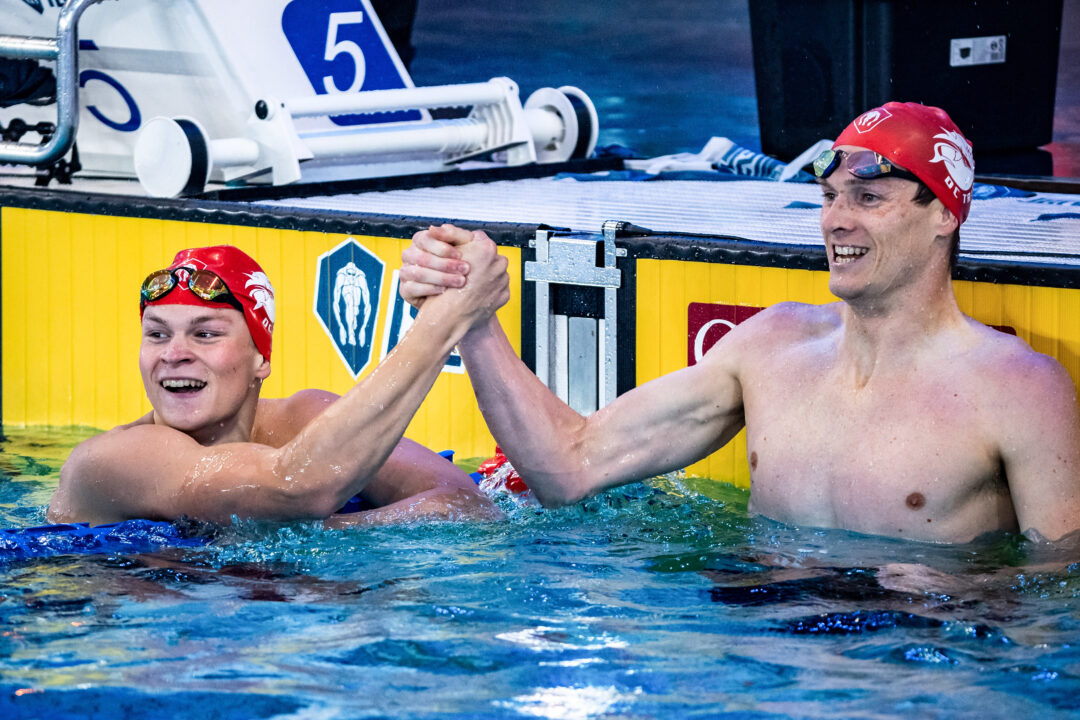 The DC Trident held off a push from Iron in the skins to win their first-ever ISL match in exhilarating fashion, with both clubs advancing to the playoffs. Current photo via Giorgio Scala / Deepbluemedia / Insidefoto

The DC Trident held off a late push from Iron to win their first ISL match in franchise history on Thursday, putting up 506 points to place first in the do-or-die Play-In Match and move on to the ISL Playoffs in November.

Iron, who erased all but five points of a sizeable deficit after Day 1, will also move on, while the NY Breakers had a spirited end to their season, rallying to steal third place from the Tokyo Frog Kings at the very end of the match.

TRIDENT EARN FIRST-EVER WIN, BUT IT WAS CLOSE

DC appeared to have a firm grasp on the match at the conclusion of Day 1, holding a 50.5-point lead on second-place Iron and a further 12 points on third place in the race for a playoff spot.

And while a top-two spot was never in question on Day 2, the victory ended up being a close call, but not until the final moments.

The Trident actually extended their lead over Iron throughout the second day prior to the skins, sitting 55.5 points clear, 485 to 429.5.

However, Iron pounced during the all-important skins, scoring a combined 67.5 points compared to DC’s 21. This included Iron’s Ida Hulkko placing second in the women’s breaststroke final, scoring a total of 24 points, and teammate Thom De Boer winning the men’s freestyle event for a total of 28 points.

DC’s saving grace that secured the match victory was the performance from Ryan Hoffer, who became the club’s first swimmer to score beyond the first round of the skins all season. Across five matches, with four swimmers entered in a skins event in each, the Trident only put points on the board beyond the first round once out of 20 opportunities.

Nonetheless, DC prevailed with 506 points to Iron’s 501, winning in the ISL and advancing to the playoffs for the first time ever.

NEW YORK BREAKS OUT OF FOURTH

It’s been a trying season for the New York Breakers, as evidenced by the fact the club finished fourth out of four clubs in all four of their regular-season matches. But despite being well outside of the battle for a top-two spot on Day 2, New York managed to squeak out its first third-place finish of the season over the Tokyo Frog Kings.

Svetlana Chimrova broke the Russian Record to win the women’s 200 butterfly, Molly Renshaw won her first women’s 100 breaststroke race of the season, and Brendon Smith put an exclamation point on an incredible campaign by winning the men’s 400 IM handily over Tokyo’s Daiya Seto.

Those efforts helped narrow the 21.5-point gap the Frog Kings held coming into the day down to eight heading into the skins.

Miranda Tucker put 30 points on the board for Tokyo in winning the women’s breast event, but the Breaker men combined to score 33, plus 13.5 from the women, to leapfrog the Frog Kings into third. After Tucker’s efforts in the women’s event, the Tokyo men only managed three skins points.

Matthew Temple, known more for his butterfly prowess, came through in a big way for the Breakers in the men’s skins, scoring 22 points after advancing to the final and ultimately taking second to Iron’s De Boer.

So while the Breakers can’t be happy with how their season went as a whole, it ended on a relatively positive note.

It’s difficult to accurately project the financial gain the athletes from the two clubs advancing to the playoffs will get relative to those who were eliminated, primarily because prize money winnings hinge so greatly on individual performance.

But with that being said, if either DC or Iron were to avoid the basement and place third in any given playoff match, all members of their clubs would earn $400. If one of the clubs were to advance to the final, all members would be guaranteed $1000 with a fourth-place finish.

Unlike in previous seasons, prize money won’t increase in the second/semi-final round. So using those top earners as an example, if they managed to earn that much dough in four matches during the regular season, three additional playoff contests could be worth upwards of $17,000 for Andison and $26,500 for Kromowidjojo, without factoring in the increased competition the next round will present with the two weakest clubs out of the running.

For swimmers that ranked around 100th in league scoring at the end of Match 10, such as DC’s Felipe Silva and Iron’s Erik Persson, advancing to the playoffs could still be worth something in the vicinity of $8,000.

So while it’s hard to quantify, advancing to the playoffs provides a big financial boost to all of the swimmers on DC and Iron.

Team Iron knew what they had to do to move on