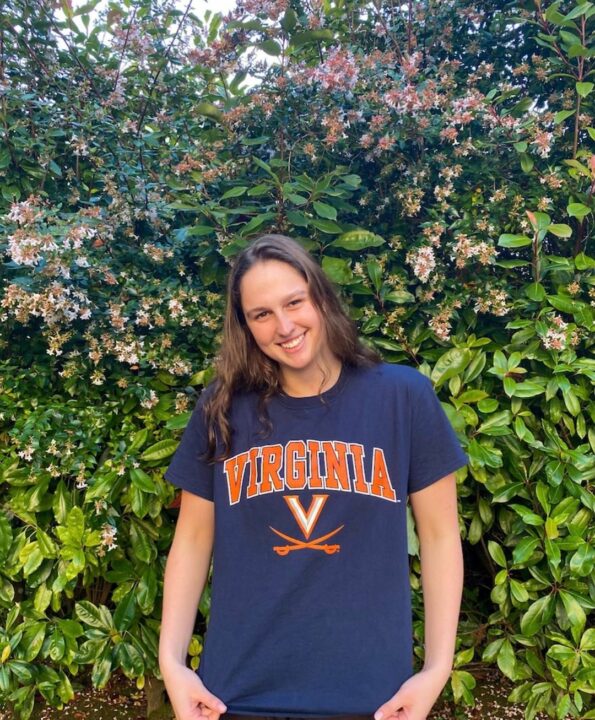 South African Aimee Canny has committed to the University of Virginia for the fall of 2022. Canny had the opportunity to represent her home nation at the 2020 Tokyo Olympic Games and primarily focuses on the sprint freestyle events.

17 year-old Canny represented South Africa at the 2020 Tokyo Olympics, competing in their 4×200 freestyle relay. South Africa finished 11th overall in prelims (8:01.56), which was a new national and African record. She led off their relay in 1:58.41, which was a personal best time. For reference, the FINA “A” time that qualified athletes for the 2020 Olympic Games was a 1:57.28.

Canny lives in South Africa, so she doesn’t have any official Short Course Yards (SCY) times. Her best times include:

Since Canny has no yards data, we’ve converted her best meters times to yards times.

Virginia won the women’s 800 free relay at the 2021 NCAA Championships, which featured both Madden and Valls. Based on her projected yards times, she’ll certainly be in contention for one of those two open spots. In the individual event, she would’ve placed 4th overall as a freshman. She’ll join a great group of young 200 freestylers which includes Ella Nelson and USA Olympian Alex Walsh.

Canny’s generated 50 free time would’ve just missed the A-Final at NCAA’s (9th), but her 100 free would’ve gotten her 8th overall. In addition, she certainly would’ve been utilized on Virginia’s 400 free relay, which was anchored in 48.08 and ended up placing 2nd overall.

The University of Virginia won the 2021 NCAA Championships, which was their first team title in school history. The Cavaliers are led by head coach Todd Desorbo, who took over the program in 2017. Desorbo was selected as an assistant coach for Team USA at the Tokyo 2020 Olympics as he placed 3 athletes on the team: Paige Madden (400 free, 4×200 free relay – Silver), Alex Walsh (200 IM – Silver), and Kate Douglass (200 IM, Bronze). All three athletes won medals at the Olympics and individual NCAA titles during the 2021 run.

Virginia has a loaded incoming class, claiming 3 of the top female recruits in the high school class of 2022. Claire Tuggle, Carly Novelline, and Emma Weber will all bring national or international experience with them to Charlottesville. Other top recruits, such as Zoe Skirboll, Sophia Knapp, and Madeline Smith will add an immense amount of depth to the Cavalier’s roster.

She a chunk o Hoo for sure!

I think UVA will run into the same predicament as UT – multiple NCAA qualifiers will not be able to go to the meet.

Not that deep yet. But getting close.

“If Virginia can claim the #1 recruit and USA Olympian Claire Curzan, they’ll have nearly solidified the #1 recruiting class.” Who’s in contention?