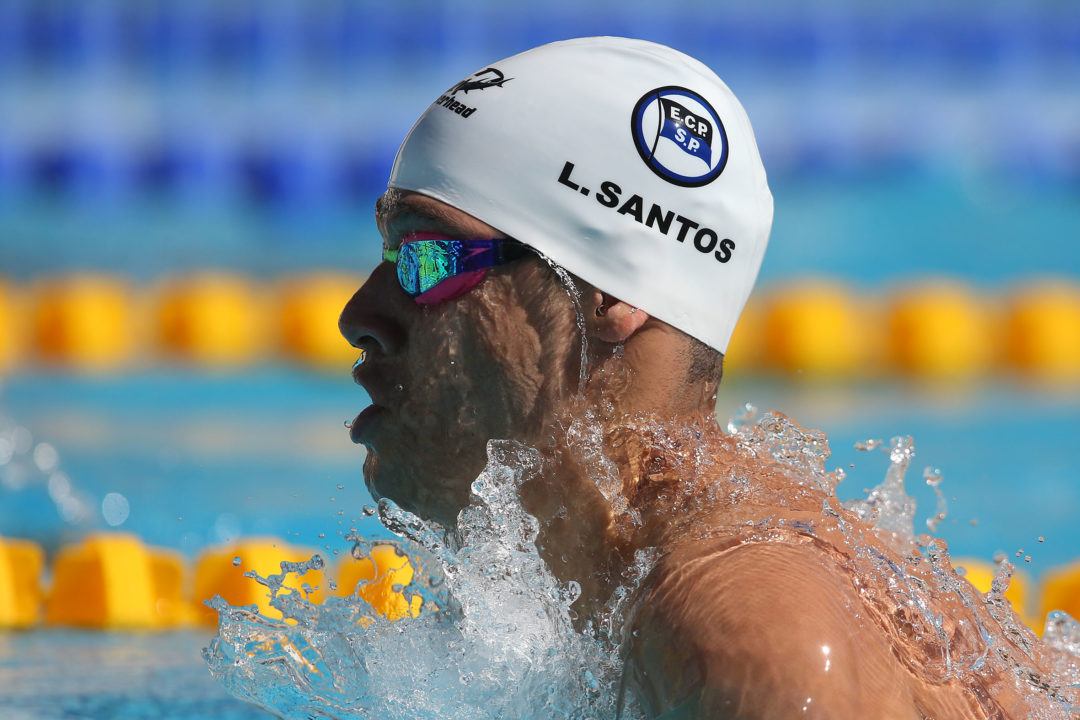 Brazilian Leonardo Santos set his first individual South American Record during the opening day of ISL Semi-Final 2 in Budapest, winning the men’s 200 individual medley in a time of 1:52.06.

Santos, 25, lowers the previous continental and Brazilian National Records of 1:52.16 set by Vini Lanza at the 2018 Jose Finkel Trophy. When Lanza set the record, he broke the old mark of 1:52.30 held by Thiago Pereira.

Santos came into the season with a personal best time of 1:53.38, set when he placed sixth at the 2018 SC World Championships, and lowers it for the second time here in Budapest. He first dipped under it at Match 4, winning the event for his Iron club in 1:52.84.

Relative to Lanza, Santos really made the difference over the middle 100 (1:00.47 to 1:01.40), while the same can be said when looking at his previous best from Match 4. Lanza, a two-time NCAA ‘A’ finalist in the 200 IM with Indiana, makes it close with his blistering 26.19 freestyle split.

Lanza, who competes for the London Roar, has only raced the event once this season, going 1:53.70 in Match 10.

In the race itself, Santos led from the get-go, finishing a full second clear of runner-up Andrew Seliskar, and now ranks second in the ISL this season behind only London’s Duncan Scott, who clocked 1:51.66 in Semi-Final 1.

While this was Santos’ first individual South American and Brazilian Record, he does have a world record to his name, as he swam the third leg on Brazil’s 4×200 free relay at the 2018 World Championships that recorded the fastest time in history (6:46.81).

The Rio native was also a semi-finalist at the 2019 LC World Championships, placing 14 in the 200 IM, and won a pair of medals in both medley events at the 2019 Pan American Games.

They really need to make a team next year with all Brazilian best. Aqua tried it but they were too late and didn’t get them all. Imagine a team with Nicolas Santos, Guilherme Guido, Fernando Sheffer, Leonardo Santos, Marcelo Chereginni, Luiz Altamir Mello, Brandon Almeida, Vini Lanza, Guilherme Bassetto, Felipe Lima, Felipe França, Pedro Spajiari, Matheus Santana and Leonardo de Deus. Maybe get Cielo out of retirement so they can break the WR on the medley relay? It’s a very solid team and could easily make it to the semis and the only reason it wouldn’t final is because Brazil lacks women’s talent. Sorry for saying it but it’s true..