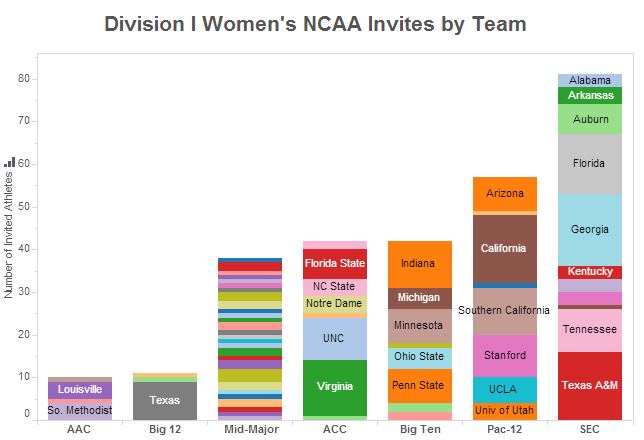 This set of interactive graphs breaks down invites to the women's NCAA Championships by conference. The powerful SEC nabbed over a quarter of all the NCAA swimming invites and 15 more than second-place Pac-12. Current photo via Jared Anderson

We’ve spent the past few weeks watching conference championships unfold and of course comparing the conferences to each other as we went. But now that NCAA invites are finalized on the women’s side, we have a new way to make some cross-conference comparisons based on how each conference will be represented at the NCAA Championships in just under two weeks.

This set of interactive graphs and charts breaks down the invite lists by team and conference. The women’s SEC will have the biggest presence at NCAAs with 81 swimmers invited – that means over one-quarter of the athletes at the national championships will have come out of one conference.

The Pac-12 follows with 57 invites, and the Big Ten and ACC tied with 42. Keep in mind that these numbers don’t include diving, where selections will be made later this week at Zone competitions.

You can switch back and forth through our various graphs using the tabs at the top of the graph.

These graphs are interactive: clicking on a team or conference will highlight it, hovering over it with your mouse will bring up more statistics.

The first tab breaks down the invites by team and conference. Click on any team to see the list below of all their invited athletes. You can also click on the name of the conference below each bar to see a list of all the swimmers invited from that conference.

Note: organizing the conferences into viewable graphs required lumping together mid-majors in the first graph. As “mid-major” can be a relative term, this analysis considered 6 co-ed conferences “Majors” (AAC, ACC, Big Ten, Big 12, Pac-12 and SEC) and categorized the rest as Mid-Majors.

You can also view the graphs on the web here instead of using the embedded version.

Thanks for putting this together. Love the way infographics streamline information. SEC showed some serious depth this year in both men’s and women’s. Looking forward to the men’s graphic.

I see in this the considerable impact of Texas A&M switching from the Big 12 to SEC. If, just for purposes of discussion, TA&M had moved to Pac 12 instead, then Pac 12 would just leapfrog SEC.

Sadly, this also illustrates that the Big 12 has become a sort of Detroit of swim conferences.

A little off topic Braden but is SwimSwam having a women’s ncaa pick em contest this year?

YouGotLezakd – we’re planning on it!

What is your definition of a mid-major? Partial scholarships?, or just everyone else outside of the 6 major conferences?

It was admittedly a fairly arbitrary distinction, but I included everything outside of the 6 major conferences as “mid-major.” My justification is this: those 6 are all co-ed (so our men’s and women’s analyses can be consistent) and each have at least one clear top-15 team that qualified 4 or more athletes for the national championships. The one conference that could certainly argue being “snubbed” is the Mountain West, which qualified almost as many athletes as the AAC and Big 12. On the other hand, MWC doesn’t have a big-name program like Louisville or Texas, didn’t have any single team qualify more than 2 swimmers and is also a women’s-only conference in swimming. For the sake of keeping the graphs… Read more »

This was one of the most interesting reads I have seen (and there have been many) on Swimswam. It would be interesting to see (realizing the research would be tedious) which teams and/or conferences do the best job of developing freshmen swimmers who had times which would have qualified for NCAA’s who had not peaked (based on high school coaches approach/feedback) and were consistent with training/coaching. The coach from Texas A & M has certainly proven he can develop numerous swimmers…I’m not sure what the freshman numbers are but it is obvious he can utilize his talent. Obviously, others schools as well…I would just be curious to know. These are things that would really help kids looking at schools.

“Curious” makes an interesting point. Are colleges “buying” the talent or are they taking swimmers and making them better and getting them to improve to qualify for NCAAs?

The only way to answer this would be to do the analysis of incoming HS talent and look at percent improvement per athlete from top time in HS to top time per year in college – would require a great deal of work. Interestingly collegeswimming.com has this information available because that is how they determine rankings per college, but they would need to break it down per class and back compare to HS times.

A true hypothesis with the. Women being even tighter in there selections since 1980 and with many attending with little aid in hopes that tithe magic wand will descend on them. Have watched so many who could have had much greater careers in other Univrersity’s. If they enjoyed their four years with academic success that it is a mute point. I would hope that swimmers would brosden there searches.

Great info Jared, this took a lot of work. Thanks