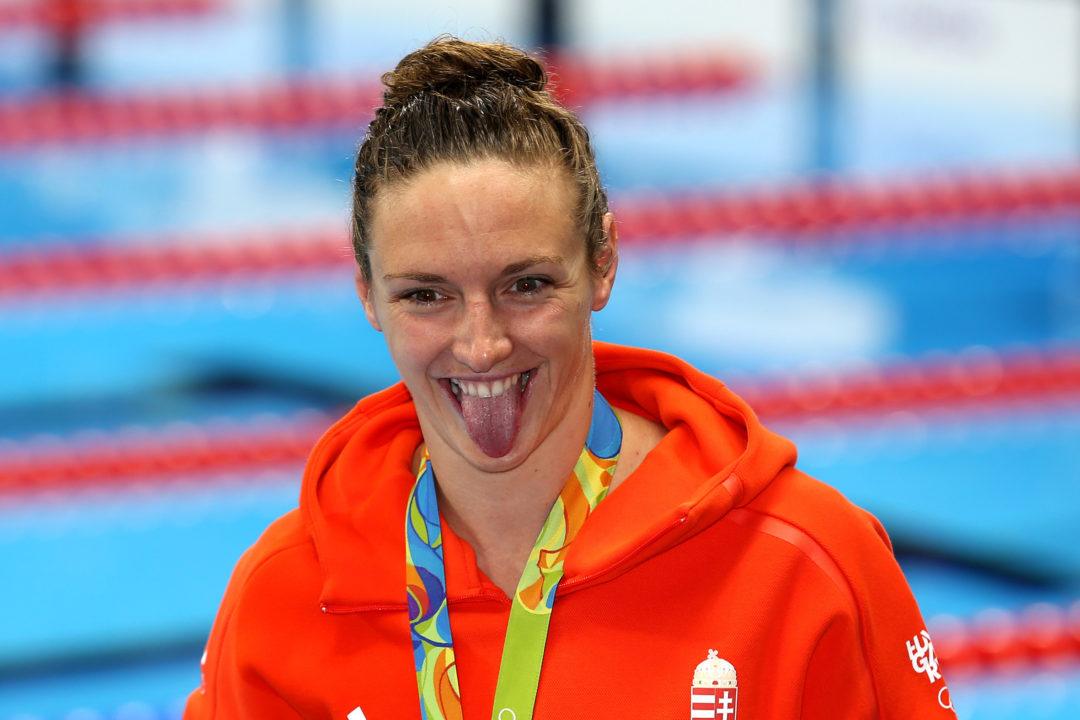 It was going to be hard for any swimmer to top Adam Peaty‘s performance in the men’s 100 breaststroke in the preliminaries, but Hungarian Katinka Hosszu was able to do just that. Hosszu annihilated Ye Shiwen‘s world record of 4:28.43 winning the Olympic gold in a time of 4:26.36.

Since finishing fourth at the 2012 Olympic Games in London the ‘Iron Lady’ has been on a mission to become the best individual medley swimmer in history. She took both the 200 and 400 IM at the 2013 World Championships, the 2014 European Championships and the 2015 World Championships. Since London she has also set a new world record in the women’s 200 IM and broken the short course world records in the 200 IM four times and in the 400 IM three times.

In the morning Hosszu put up a time of 4:28.58 just 15 one-hundredths of a second off the world record but returned to the pool tonight with one goal in mind, “I didn’t want to just break the record,” Hosszu told YahooSports. “I wanted to crush it.”

She accomplished that goal turning at the 300 meter mark 5.25 seconds ahead of world record pace. No one expected her to match Ye’s incredible last 100 freestyle split of 58.68, but Hosszu had no need to that eventually breaking the world record by over two seconds.

Although Hosszu may have outdone Peaty his feat was incredibly impressive. Coming into the Games the British swimmer held the 100 breaststroke world record with a time of 57.92, which he set at the 2015 British Championships beating the previous record of 58.46 set by South African Cameron van der Burgh. This morning Peaty broke his own record by almost half a second putting up a time of 57.55.

The 21 year old surprised himself with the swim, “I went out pretty fast, quite easy, came back and I heard everyone cheering and I thought, what are they cheering for, there’s no Brazilians in this lane?” Peaty told the press.

“I wasn’t even pumped up in the call room. But as soon as I walked in, it was either fight or flight and I chose to actually get something out of it. You can either be shy of the arena or take advantage of it.”

In the last year Peaty has lowered the world record by almost a second.

In the semi-finals he posted a time of 57.62, the second fastest time ever swum, but told the BBC that he feels he can be faster tomorrow, “I feel like there’s more in the tank but I want to save myself for that and hopefully cash out tomorrow.