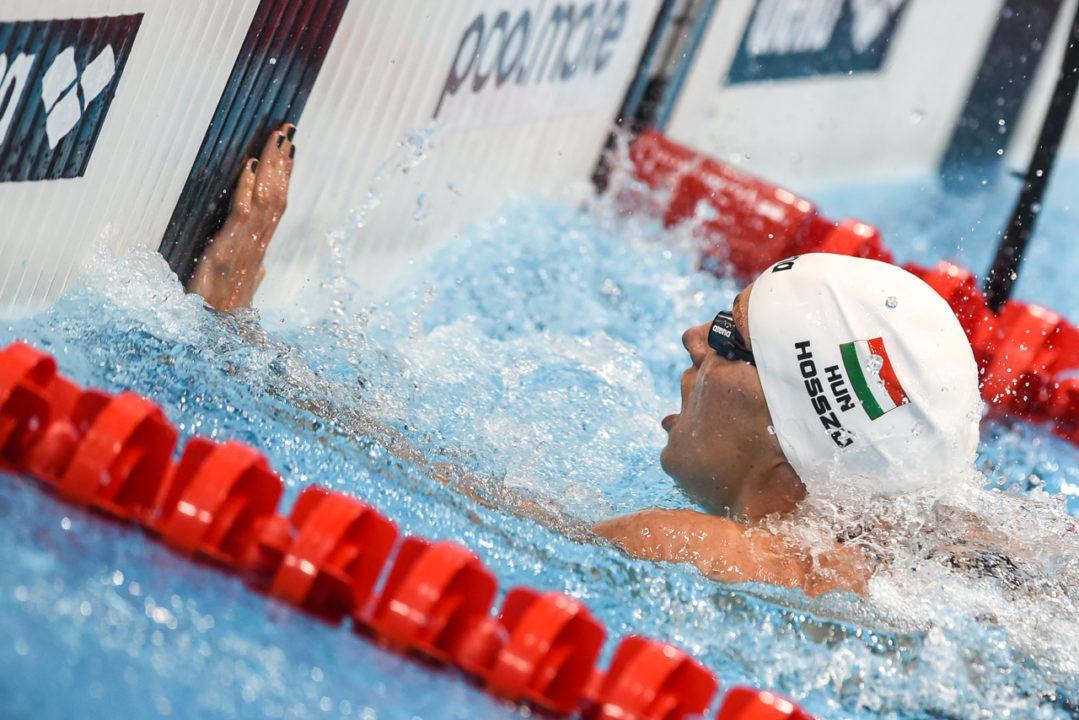 In Moscow, Vladimir Morozov and Katinka Hosszu hurtle towards the top bonuses in cluster 1 of the FINA World Cup series, with the former entering 4 races and the latter taking on all 17. Archive photo via Peter Sukenik/www.petersukenik.com

In Moscow, Vladimir Morozov and Katinka Hosszu hurtle towards the top bonuses in cluster 1 of the FINA World Cup series, with the former entering 4 races and the latter taking on all 17.

A few notable tidbits to watch for:

Jamaican breaststroker Alia Atkinson does not appear on the entry lists. Atkinson tied a world record in the 100 breast at the series opener in Paris, but won’t swim in Moscow unless she’s a late addition to the start lists.

That could have big money implications: Atkinson is currently second in the women’s points and in line for a $35,000 bonus. But a swimmer has to swim all three legs of the cluster to earn a cluster bonus, so an absence in Moscow will cost her that entire $35K.

Speaking of cluster bonuses, Moscow will wrap up the first cluster of the tour, with the top 6 men and top 6 women in series points all earning big bonuses. Here’s the current top 10, with swimmers not on the Moscow entry lists put in italics, and those in line for cluster bonuses in bold:

Germany’s Franziska Hentke is also absent from the entry lists, meaning the four-way tie for 8th in the standings is currently a tie for a $5,000 bonus, and more if any of those swimmer can leapfrog 6th-place Yulia Efimova.

For the men, Bobby Hurley, Kirill Prigoda and Mitch Larkin are all tied for the final bonuses. Right now, two of the three would earn bonuses.

Unlike Berlin, where only a small number of German national teamers competed, a huge Russian contingent will race in Moscow. That’s led by Morozov and Efimova, but the big Russian roster will give this meet a much fuller feel than the past few World Cup stops, where several events haven’t even had enough entries to require morning heats.

Got to support her husband somehow…

With all the recent controversy surrounding Russia’s participation in the Olympics due to state sponsored doping and also banning of many athletes for same, is it wise for FINA to allow this event to go ahead? It seems many swimmers are apathetic to the situation as they are supporting the event by their participation.

I believe that in the wake of the McLaren report, the IOC requested the international sporting federations to suspend hosting competitions in Russia until reforms were made. This meet was already on the books long ago and it would be costly to FINA to relocate or cancel. As we all know, FINA is not about to walk away from a paycheck, luxe accommodations and a hefty per diem.

That would be pretty sick if she actually swam all the races. It would really just be one very long, incredibly tough practice.

It would be great if she did it. I don’t believe it has ever been done before and you’re right: it would be like two days of training. She’s definitely the only swimmer in the world male or female who could do every single event at a world class level right now.

I would say she’s world class at every stroke; after all, she did win the 400 IM, 100 back and 200 IM at the Olympics… And I certainly wouldn’t mind having her times on her worst events on SCM. Either way I don’t think she’ll care to much whether we think her performances are world class or not, she’s earning $1500 every time she wins lol

If you don’t think those times are not world class, I don’t know in which universe you live.

Obviously world class, and her in season times are even more world class on a relative basis.

SWIMMER A and JOEL LIN defined Hosszu participation at World Cup as training. I totally agree with them on that. I also praised Hosszu for her innovation of making money during training. I corrected JOEL LIN that not every of her races at World Cup are world class level. Your knowledge of Hosszu’s personal bests is very impressive but has nothing to do with this conversation.

For example, if you consider her 3:58 at 400 free a world class time then how will you classify 4:02 shown recently at this Cup that gave her gold medal.

0
0
Reply
Prickle
Reply to  Swimmer A

Training programs of many swimmers include attempts to swimt closely at their best along with other exercises. It is so natural to ask yourself: why such great efforts should be wasted for free and being watched by coach and a few teammates only if it can be a commodity. Especially if there are some people who are willing to pay for practice and broadcasting it.
I hope that those who organized this practice exercises proudly called World Cup are making money. But the entire idea looks kind of stupid to me and Katinka Hosszu cleverly punish them for this stupidity. Kudos. I personally won’t spend my money to watch practices.

So many downvotes is good. It is much better than zero up and zero down. You may honorably/dishonorably, respectfully/disrespectfully disagree with me, but it means at least that you care. As much as you do I want the business in professional swimming to be run the way that helps swimmers to make living at decent level. The earnings that will make sense of so much efforts incomparable with those made by well paid athletes in popular sports like soccer, basketball, football, golf and even tennis. I want to see the system that will suitable not only for very top few elite swimmers but also for the large group of great swimmers that follow these few. This thread is not the… Read more »