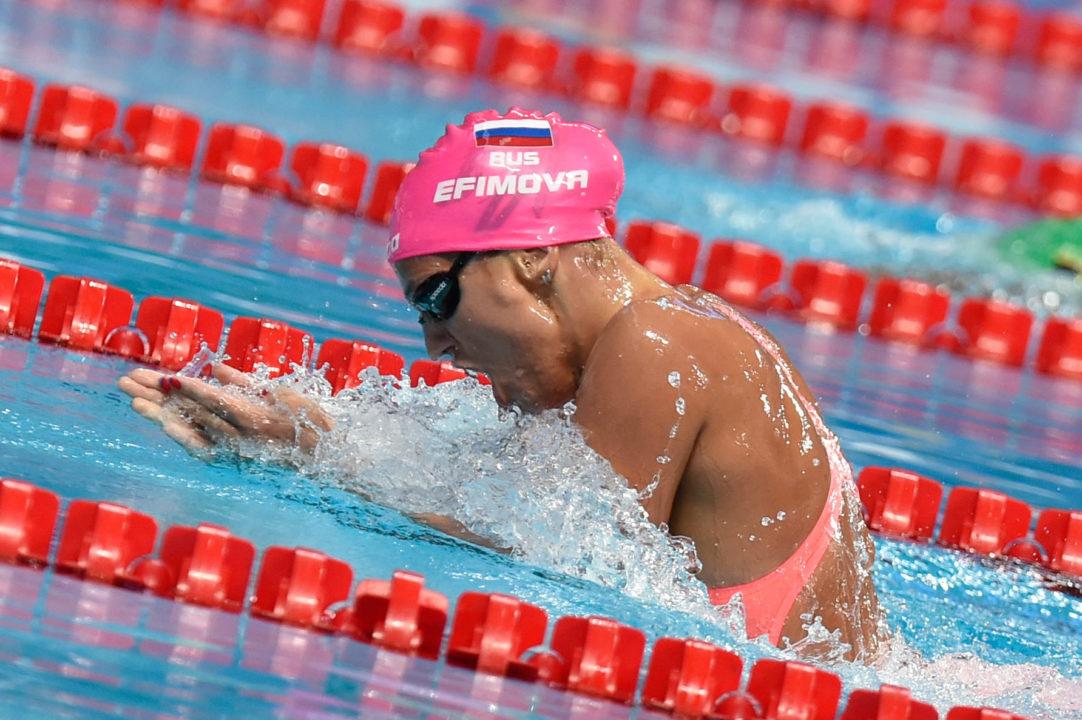 Chad Le Clos won the men’s 100 fly in 49.01, about 6 tenths shy of his own World Record. The South African then returned to the pool a few events later to give points leader Vlad Morozov a run for his money in the 50 free.

Yulia Efimova made the FINA World Cup stop in her home nation a smashing success, setting new Russian records in the 100 breast and 200 IM.

The 24-year-old Russian swept all three breaststroke races in Moscow, going 1:02.91 to win the 100 and take the national record below 1:03 for the first time. Efimova had previously set the national record at 1:03.17 earlier in the week at the World Cup stop in Berlin.

Efimova was just 3rd in the 200 IM, but still managed to become the fastest Russian in history. Her 2:06.79 breaks another record she set at the Berlin World Cup stop. Efimova was 2:06.93 in Berlin.

It’s been an eventful and difficult few months for Efimova. Early in 2016, she failed a doping test for meldonium, a drug that had just become illegal in January of 2016. But as new information suggested the substance could stay in an athlete’s system longer than expected, and many of the athletes expected to serve suspensions were not banned from competition. That group included Efimova.

But the Russian still took plenty of heat at the Olympics, hearing boos prior to her races and taking some harsh words from other swimmers, most notably American Lilly King.

And while the Olympics weren’t an outstanding showing for Efimova, the breaststroker has been heating up through the World Cup’s first cluster and had an excellent meet in Moscow.

Best All Distance Breaststroker to ever walk the planet. Wait till one of Lilly Kings supplements is put on the banned list and is still in her system 3 months after she stops taking it. I’m sure we will all be on Lillys’ side then just like we were when Jessica Hardy fell foul of the supplement game. Different rules for different Nationalities. Textbook Nationalism. Haters gunna hate 😀 Just enjoy the way she splits that 200 😀 Its a thing of beauty 😀

This comes down to our values about what we believe is right and what is wrong. Is it so important to catch the guilty that we should be willing to punish an innocent one? Is this idea in harmony with American ideals? Should someone be punished for breaking a law that was not a law when they broke it? How does that idea fit with American ideals? What kind of society would we be if we adopted these ideals? Anyways, I do not know 100% if Yulia Efimova is guilty or not. Guess what? Neither does Lilly King or anyone on this board. I do know 1 thing though. Lilly King risked condemning an innocent person when she shot off… Read more »

Fortunately no American swimmer or athlete has EVVVVERRR taken PEDS, oh wait yes they have.

Sure Bob. Athletes from all countries have taken PED’s. Armstrong was the master-doper. The clear difference is that the USA pursued Armstrong,Jones relentlessly until they were stripped of all world titles medals etc and in Jones’s case sent to jail. This is in stark contrast to Russia’s State sponsored program which switched urine samples and made positive tests disappear. This in 2016?? Its like going back to the GDR doping programs in the seventies and eighties and the victims it created on both sides, both the dopers and the clean athletes denied medals.

What if the “dopers” unintentionally ingested substances they did not realize were in their system? Those things can happen too! Is that the same as someone knowingly and willingly putting in PEDs to get an unfair advantage? Kind of funny you left out Jessica Hardy on your list of “dopers”?

SCOTT MORGAN is the king of strawman arguments and deflection while offering no substance whatsoever.

Feel free to list examples of strawmen and deflection, Crooked Hillary. As for substance… it’s obviously not my place to judge that, so I’ll take your word for it. To the point here, however, Bob’s comment seems to me to be pushing at an open door: I am yet to hear an argument against PEDs that exempts the US or any other nation.

I started the Olympics rooting for King but I quickly switched over to rooting for Efimova even though I am an American. I cannot believe that other Americans do not see that King winning a gold medal is actually bad for America. Winning a medal makes a person a de facto ambassador for the nation that they represent. We now have an arrogant bully representing our nation. Also, I do not think that the evidence against Efimova is very strong. I believe that she likely took the Melodnium before it was banned on January 1st(It may well stay in the blood for up to 9 months). It cannot be proven. Assuming that Efimova is guilty is actually very Un American!… Read more »

Drinking several cokes strategically before a race can enhance a racers performance just like certain other medicines. Caffeine can do the trick. Just ask Lilly. Shake her hand 15 or 20 minutes after a race!

She has the shakes

I was a huge Lilly fan going into the Olympics also. I think maybe we can excuse her behavior as the arrogance of youth. Lilly’s 100 is a thing to behold lets hope she is around in 4 years to display a little more maturity because there really is nothing uglier than a sore winner. There are ways to let your feelings be known that don’t detract from your performance. I hope she learnt a little about media exploitation and how the people encouraging you to speak up are not necessarily looking out for your best interests.

I don’t Yulia is a cheater. She has been sanctioned and cleared already. The circumstances on her unintentional doping incident has already been litigated. Why are you guys so intent on tarnishing her image?

Btw, Jessica Hardy was also busted for a doing incident similar to Yulia. Jessica’s doping was the result of taking supplements which she did not know contain banned substances just like Yulia.

Why the lame double standard? Not all Russian athletes cheat.

You have conveniently left out the fact that, in addition to 5 of her urine samples testing positive to meldonium this year, she has tested positive to different banned substance in 2013 and served a year and half ban, after which she said to the effect “what’s the big deal. It’s like getting speeding ticket”

She knew that meldonium was put on WADA watch list in 2014, and in October last year WADA already issued announcement on its ban starting 1 January 2016.
Even if she only took it until 31 December 2015 (which I don’t believe), she knowingly intended to cheat.

Efimova is not your first time accidental doper, she is a repeat offender.

But she is gorgeous

What don’t you apply the same kind of outrage for Jessica Hardy? A six month ban was a reduction because it was deemed unintentional. If it was intentional then the punishment would be 2 years. I didn’t know you could read a her mind now saying how she knows about what substances will be banned in all? 🙂

You have a hyperactive imagination!

Ok let’s see if you can answer my question about Jessica Hardy? I’ll be waiting.

Also waiting for your thoughts on Jessica Hardy getting 6 months …..

I feel for those swimmers that placed 4th in the 100 and 200 breast. Shi Jinglin and Chloe Tutton respectfully!

Agreed. I brought this up during the Lochtegate frenzy.

Ya on point tip