Hope College Hype Video: The Flying Dutchmen “Get the Job Done As1” 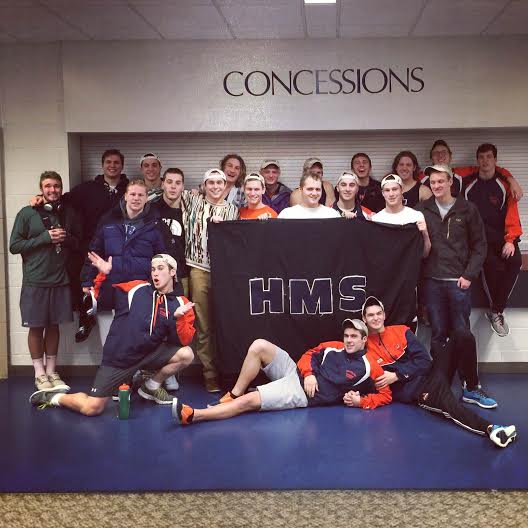 The Hope College Flying Dutchmen men's swimming and diving program, like most any college team, is rich with tradition. Current photo via Ryan Johnson

College swimming is big in America– not just because college swimmers get to swim in yards (for the most part), but because of the team aspect. Swimming can be a lonely sport sometimes, but college teams across the States are some of the most close-knit communities on campus. Through the highs and lows of a season and of college life, your teammates are with you at 5:30am for practice, they’re yelling your name as you dive in for a big race, and they’re there to talk to when you’re having a bad day. It’s important for every team to have shared trust and champion positive values– the swim team at Hope College in Holland, Michigan, does just that.

The Hope College Flying Dutchmen men’s swimming and diving program, like most any college team, is rich with tradition.

One such tradition is the existence of the ‘black flag,’ which is seen in the photo to the right. On it are the letters ‘HMS,’ standing for ‘Hope Men’s Swimming and Diving.’ According to sophomore freestyler and video producer Clay Hackley, it was made over ten years ago by an alum’s mother. It goes to near any meet and is a material embodiment of their cheers.

Nicknames are also a valued aspect of the HMS team. They serve as a validation of membership. According to Hackley, every freshman on the team gets a white Hope Swimming and Diving cap at the beginning of the year.

“Any older swimmer on the team can, at any moment, take your cap and rub in dirt or anything to get it dirty. It’s sort of like a varsity jacket,” explains Hackley. “Along with that every freshman gets a nickname that relates to something they’ve done or something about them. Once they are officially given their nickname (this happens around our mid-season taper meet) they get to write that nickname on the bill of their hat on the right side and ‘As1’ on the left side of the bill.”

The core values of the team are here. ‘As1,’ says Hackley, means ‘as one team.’ It’s a reminder scrawled on every swimmer’s cap, a message that keeps team spirit alive and assures everyone that they are part of the Hope team.

“We do everything together as a family,” says Hackley. “It’s very important. We cheer ‘we get the job done.. As1!'”

Hackley and the rest of the Flying Dutchmen will try to ‘get the job done’ this season, coming off of a 3rd place finish at last year’s MIAA Championships. They’re led by Head Coach John Patnott, who’s now in his 38th-consecutive season coaching the Hope College men’s and women’s teams. Hope will host the 2017 MIAA Championships this coming February, and they’ll be looking to improve upon their 3rd place finish from 2016.