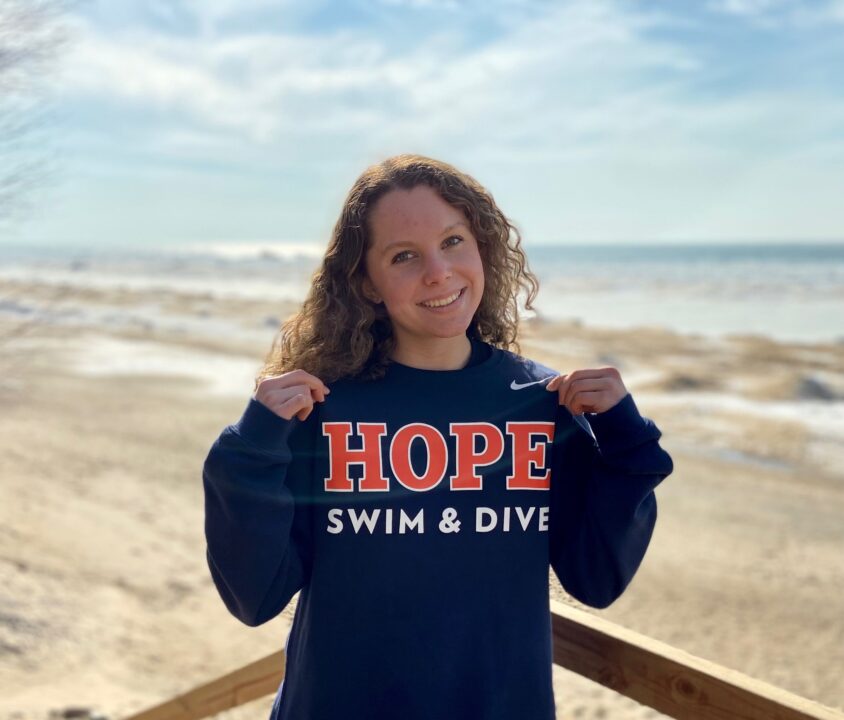 When Stolle arrives in Holland, Michigan next fall, she will be an immediate boost to the team in the breaststroke and IM events.

With a year of high school left to complete, Anna Stolle of Fishers, Indiana has announced that she will be attending Hope College in the fall of 2023. Stolle is currently entering her senior year at Hamilton Southeastern High School and swims with the Southeastern Swim Club.

“I am so excited to announce my verbal commitment to Hope College to continue my academic and athletic career! Thank you so much to all of my coaches, friends, and especially my parents who have helped me along the way. I also want to thank Coach Taber, Coach Jolly, and Coach Grace and the team for being so welcoming and supportive! ROLL DUTCH!!”

Stolle will be a huge addition to the Hope breaststroke and IM groups when she arrives on campus in 2o23. With a over a year left to improve before she starts college, she already holds times that would rank among the programs best. In 2022, she would have been among the team’s top-3 in both breaststroke and IM events.

Hope ran away with the 2022 Michigan Intercollegiate Athletic Association Swimming and Diving Championships, winning by over 100 points over Calvin College. Stolle would have helped to widen that gap even further, with her times all being capable of earning medals at the meet. Her highest finish would have come in the 400 IM, where her lifetime best would have earned her silver.

Hope fielded an impressive freshman class this season, led by NCAA All-American Sara Kraus. Krause finished 5th overall at the NCAA Championships in the 200 back and 7th in the 100 back. Stolle and Krause will have two years of overlap at Hope.

Stolle won’t be the only standout breaststroker joining the Flying Dutch in the next two years, as the team is slated to add University of Michigan transfer Greta Gidley this fall. Gidley is a huge addition to the team, with a lifetime best in the 100 free that would have won the NCAA title last season. She also boasts a time of 1:03.45 in the 1oo breast that would have led the team last year.

Hope is on the rise! Congratulations and best of luck!

Coach Taber and Jolly are doing a fantastic job! Hope is a great school, and Holland is such an incredible town