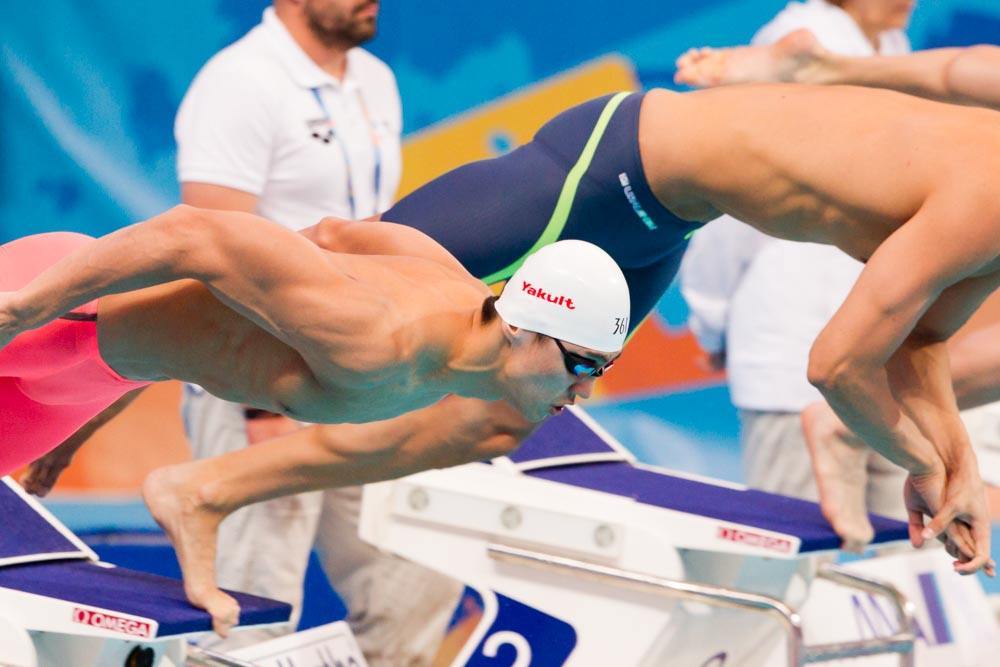 The men's 100m freestyle final showcased a historic amount of first for the sport of swimming that show just how internationally versatile swimming is becoming. Current photo via Tim Binning/TheSwimPictures.com

The men’s 100m freestyle final showcased a historic amount of firsts for the sport of swimming that shows just how internationally versatile the sport is becoming.

As soon as Chinese sprinter Ning Zetao stretched out in order to stop the clock in 47.84, he became the first Chinese man to ever win the 100m freestyle at a World Championships. With only one more freestyle event remaining on the schedule, the Chinese men have medalled in every single individual freestyle event at these world championships.

Famed Russian sprinter Alexander Popov was on deck to see Ning’s win. Popov said, “we witnessed a historic moment in the 100m freestyle,” referring to the first win ever by a Chinese male.

Behind Ning at the touch was Cameron McEvoy, the only other swimmer under 48-seconds at these championships. McEvoy was heavily favorited to win after Russian swimmer Vald Morozov was disqualified in the semifinals.

McEvoy ended up second in 47.95. One of McEvoy’s harshest critics was Popov who was a previous Olympic and world champion in the 100m freestyle. Popov said of McEvoy’s swim, “I think he was capable of producing a better result. As we all know sport is sport and there’s only one winner.”

FIRST ARGENTINE MEDAL EVER AT WORLDS

Rounding out the top three behind McEvoy was Frederico Grabich of Argentina. Grabich was just short of the 48.11 Argentine record he set just a few weeks earlier at the 2015 Pan American Games in Toronto.

As he touched in for the bronze medal with a time of 48.12, he also became the first Argentine swimmer ever to earn hardware at a swimming world championships.

Grabich is having one of the most impressive years ever for Argentine swimming. At the Pan American Games he earned two individual medals including a gold in the 100m freestyle. With this bronze from worlds, Grabich now has three major international medals from the 2014-2015 season.

Grabich turned in fifth after the first 50 in 23.02, however came home with the third fastest last 50 in order to pass both Santo Condorelli of Canada and Marcelo Chierighini of Brazil in order to secure a podium spot.

Thursday night. American-born sprinter Santo Condorelli put up the second best placement ever by a Canadian in the 100m freestyle at the world championships.

Condrelli managed to put forth a 48.19 despite being a 47.98 earlier this season at the Pan American Games. Condorelli was just 0.07 seconds shy of a podium position.

Turning first at the 50 in 22.75, Condorelli attempted to hold on for a medal. Cominng home in 25.44, that didn’t happen, but it still puts Condorelli’s name on the map as one of the top sprint freestylers heading into the 2016 Olympic Games.

If you take a look through swimming history, historically the Americans have been the most successful nation in the 100m freestyle. Winning the event a record six times, the Americans haven’t won the event since Anthony Ervin claimed gold all the way back in 2001 at the world championships in Fukuoka, Japan.

Defending Olympic champion Nathan Adrian wasn’t able to stop the American gold medal drought as he finished well off the podium, tying for seventh with Pieter Timmers of Belgium who broke the Belgian national record in the 100 free in semis. .

Congrats to Ning but i still can’t get over the whole doping situation, still a good swim for him. Was expecting Adrian to drop a lot after all his swims at the Grand Prixs, don’t know what happened there with him.

Supposedly injured. He hasn’t been seen in the stands so probably needed recovery time.

Man, we’re having a tough time at this meet. Back to the drawing board I suppose.