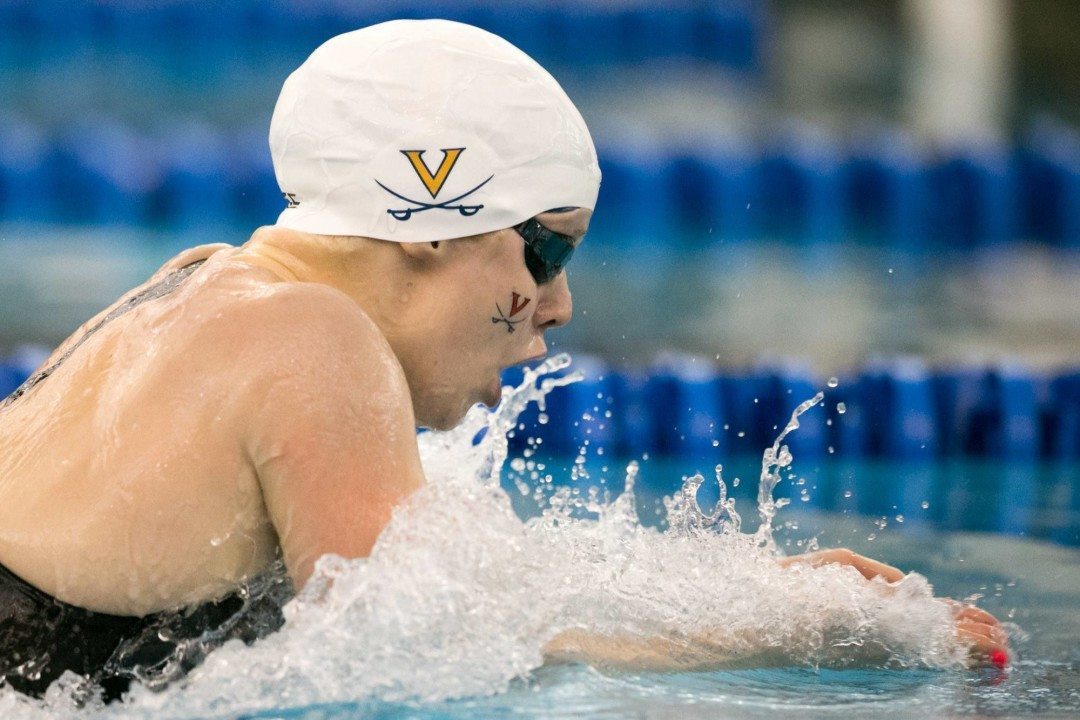 MICHIGAN VS. VIRGINIA VS. PENN STATE

Building on their day 1 lead, the Virginia women locked down a pair of wins in their tri-meet against Michigan and Penn State. The Michigan women fell to UVA, but still came home with a victory over Big Ten foe Penn State.

Virginia’s Laura Simon and Michigan’s Siobhan Haughey battled in the 200 breast for one of the most exciting races of the meet. Simon had the slight edge at the 150-mark, but Haughey charged home to try and pass her on the final lap. The two swimmers would up tying for the win with identical winning times of 2:12.47, which now stands as their shared pool record.

Penn State’s Kaitlin Saloky brought in a win for the Nittany Lions. Saloky smashed through the 23 second barrier to win the 50 free, touching the wall in 22.90 to outswim Virginia’s Caitlin Cooper (22.93) and Michigan’s Catie Deloof (23.13).

The Michigan men held on to their leads over both teams to finish the meet, adding 2 victories to their record as they topped Virginia 203-140 and beat Penn State 217-126. Host team Virginia also came away with a win, beating Penn State 236-115.

After setting a pool record in the 100 free yesterday, Penn State’s Shane Ryan completed his sweep of the sprint freestyles on day 2. Ryan blazed to the finish in 20.09, giving himself the edge over Michigan’s James Jones (20.29). He then went on to win his 3rd event of the weekend, clocking a 47.19 in the 100 back.

Virginia’s Austin Quinn took an individual event victory for the Cavaliers, racing to victory in the 200 free. He put together a strong back half to outpace Michigan’s Jack Mangan (1:38.61) and Penn State’s Matthew Stasiunas (1:38.92). Quinn’s 1:37.48 victory made him over a second faster than anyone else.

U-M won the 200-yard medley relay with a 1-2 finish, but it was the ‘B’ team that touched the wall first. The quartet of freshman Alex Martin, Klein, sophomore Jon Burkett and fifth-year senior Luke Papendick made up the winning team (1:28.86).

With the result in hand, Michigan elected to exhibition all non-winners after the 100-yard butterfly. The Wolverines still produced some solid in-season times, particularly from senior Jack Mangan in the 200-yard freestyle (1:38.61, would have been second) and junior Tristan Sanders in the 100-yard backstroke (49.09, would have been third).

In the diving well, freshman Jake Herremans took second on the one-meter springboard (295.15).

Papendick, junior Paul Powers, Ransford, Swanson and White will represent Michigan and the Big Ten at the USA College Challenge, set for next Saturday and Sunday (Nov. 12-13) in Indianapolis. The dual meet, which pits Big Ten All-Stars vs. select U.S. National Team members, begins at 6 p.m. on Saturday and 11:30 a.m. on Sunday. The Big Ten Network will show both sessions beginning at noon on Sunday.

CHARLOTTESVILLE, Va. — The top-ranked University of Michigan women’s swimming and diving team split its double dual, toppling Penn State (270-83) and falling to No. 6 Virginia (196.5-156.5) on Saturday (Nov. 5) at the UVA Aquatic and Fitness Center.

The other individual victor on the day was junior Clara Smiddy, who touched first in the 100-yard backstroke (54.41). U-M showed its depth in this race, as well, with sophomore Catie DeLoof (55.40) and freshman Jacqui Schafer (55.88) taking third and fourth, respectively. U-M also won the 400-yard freestyle relay by nearly three seconds to close the meet, with Catie DeLoof, Gabby DeLoof, Postoll and Haughey making up the winning team (3:17.68).

Swimmers Yirong Bi, Gabby DeLoof, Haughey and Smiddy will represent Michigan and the Big Ten at the USA College Challenge, set for Saturday and Sunday (Nov. 12-13) in Indianapolis. The dual meet, which pits Big Ten All-Stars vs. select U.S. National Team members, begins at 6 p.m. on Saturday and 11:30 a.m. on Sunday. The Big Ten Network will show both sessions beginning at noon on Sunday.

Siobhan Haughey can swim the 200 br???
She can really do everything