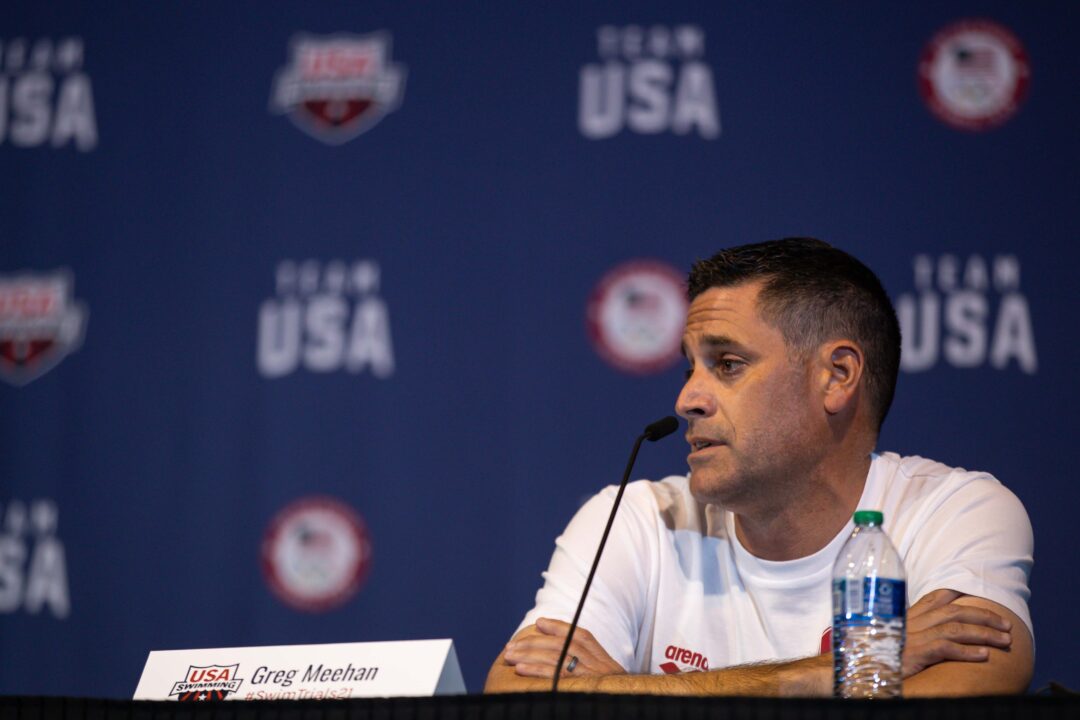 Meehan is candid as he shares his disappointment and sadness to see Smith leave, not only as an athlete but as a teammate and friend to everyone on the team Current photo via Jack Spitser/Spitser Photography

We sat down with Stanford head coach Greg Meehan to discuss the departure of Regan Smith from Stanford after 1 year to turn pro and go train with Bob Bowman at Arizona State. Meehan is candid as he shares his disappointment and sadness to see Smith leave the Cardinal, not only as an athlete but as a teammate and friend to the rest of the women under his mentorship. But he also shares that even though he doesn’t necessarily agree that leaving is the best thing for Smith to do, he understands that she thinks it is the best thing for her career, and Meehan respects and honors that.

We also talk to Meehan about how he’s dealt with pros turning a new leaf and leaving the Stanford program in the past, why he decided to train Torri Huske for the 400 IM, and what his life is like now that he isn’t preparing to be the head Olympic coach.

People may want to go read the interview with Regan herself on the other swimming news website. She basically says Greg’s workouts weren’t enough to swim a 200 and she felt unprepared standing behind the blocks. She’s leaving so she can get better training.

Even though it is a surprise to read the news… it is kind of not surprising… Regan had showed she wants control /flexibility of her pool training time in the past. And I assume, unless her high school does not have a swim team, that was the reason she did not swim at high school meets to avoid the training restrictions.

Besides, both Regan and his father has been vocal about the downside (at the time) of college swimming. Even with NIL, assuming they are still not able to fully capitalize on prize money and all sponsorship opportunity.

Now that she has one year of NCAA experience which unfortunately was very skewed by the pandemic, it is not… Read more »

Swimswam, are you not interested to know what’s happening to the most successful make swimmer of the last 5 years?

How does Dressel relate to Stanford University and head coach Greg Meehan?

You’d have better success with leaks from the Kremlin.

make = male but I agree. It should be discussed instead of everyone ignoring it and being afraid to say anything. The first person that should say something should be the most successful male swimmer of the last five years. He will highly likely be helping himself and others as well. The truth gives you freedom.

To quote Braden in this thread:

“I think it’s smart by Greg. Tell your own story, or you’ll let other people tell it for you.”

Can you please stop repeating this? It is becoming annoying, and at this point, your incessant comments are making me not want to know what happened.

College swimming head coach is hired and paid making the team to achieve. That is the major his/her professional concern. The progress of individual swimmers is secondary as soon it is more than necessary for the team success. During last decade Greg Meehan got lucky to have outstanding group of swimmers. Together with the coach they made the Stanford team and consequently the coach famous. How much has he contributed to their attempts to compete at world (not college) level? That isn’t part of his/her job description.
They would not looking for good from good.

Stanford University recruits itself. In addition, the Avery Aquatic Center is to die for (metaphorically speaking).

Regan looked so stressed out at Olympic trials. At the end of the day, collegiate student or pro, this is still just a sport. Academics at Stamford must be so intense, and Regan very well could have felt there was no feasible way for her to give her best effort to both things. Pro swimming is still such a new option, and being in a college setting with training restrictions and academic pressure but still being expected to compete against athletes who aren’t in school seems like a big ask. For some swimmers maybe the academics gives them a mental break from focusing too much on athletic performance alone, and for others it may prove to be too much to… Read more »

Maya DiRado graduated from Stanford University in the summer of 2014 or 2015. Maya DiRado was a professional swimmer when competing at the 2016 Summer Olympics.

You seem oddly hostile in your comments. In any case I was referencing Maya only in light of the fact that at the time she won Olympic gold she had already decided where her competitive finish line was located and had a vision of what her life would look like after wrapping up her swimming career. I don’t think anyone watching Missy Franklin competing in 2012 was predicting by 2016 she would be a swimmer in the stands instead of the pool – watching Maya grab an upset win in the 200 back. The amount of coverage and pressure elite swimmers are contending with keeps escalating. Maya wasn’t worried about what came after her Olympic performance, but Regan is.

Missy Franklin was diagnosed with bursitis and underwent surgery on both shoulders.

Please explain the mass exodus from the women’s swimming program at Stanford University:

Drabot and Forde retired to pursue other careers. Eastin got sick. As stated in the video, Ledecky’s departure was part of a planned transition.

All of those women (and many others with guidance of Meehan, staff and Stanford resources) have received a great education and their degrees from Stanford, and all have been vastly successful both in and out of the pool and are set up for great futures–something one would hope is not lost on parents looking to guide their children about Stanford and other college swim programs.

Regan Smith may have noted the results at the 2022 FINA World Aquatics Championships by Katie Ledecky with the change of coaches from Meehan to Nesty.

To further clarify, Maya DiRado was a senior at Stanford University during the 2013-2014 time frame.

No one asked why Lillie Nordman and Isabel Gormley have regressed at Stanford University? Reference the results from the 2019 FINA World Junior Swimming Championships for further details.

Coleman! Why didn’t you ask him to assess every swimmer on his team in an interview about Regan Smith?

Stop picking on Isabel! People were making nasty comments about her before NCAAs. Does anyone really know what her circumstances are? Not everyone is going to be a Regan Smith or a Katie Ledecky

How about Zoe Bartel?

This is weird, man. Just picking out random swimmers and saying they “regressed” is kinda gross.

A list of female swimmers who actually medaled at the FINA World Junior Swimming Championships?

Check out the results from the 2017 FINA World Junior Swimming Championships for further details.

And that’s exactly my point – if swimmers are already that good, are they more likely to continue improving or “regress” a bit?

The other half of my point is you only keep track of these top-tier swimmers – but what about other athletes that enter college and never improve, but because they don’t make it out of heats at their conference meet, they don’t get some weirdo in the comments bashing them for “regressing.”

It’s not a representative sample, and just because those swimmers were much better than their peers AND went to a highly visible school, you’re more willing to call them out.

Old Swimmer’s previous point: “Does anyone really know what her circumstances are?”… Read more »

Meehan is overrated. Mixed medley at Olympics showed this.

These were the issues (read between the lines) https://www.usada.org/sanction/isabel-gormley-accepts-sanction/

Janet Evans left Stanford University because she was not allotted enough training time in the pool.

How much training was Regan Smith receiving in the 50 meter pool at the Avery Aquatic Center?