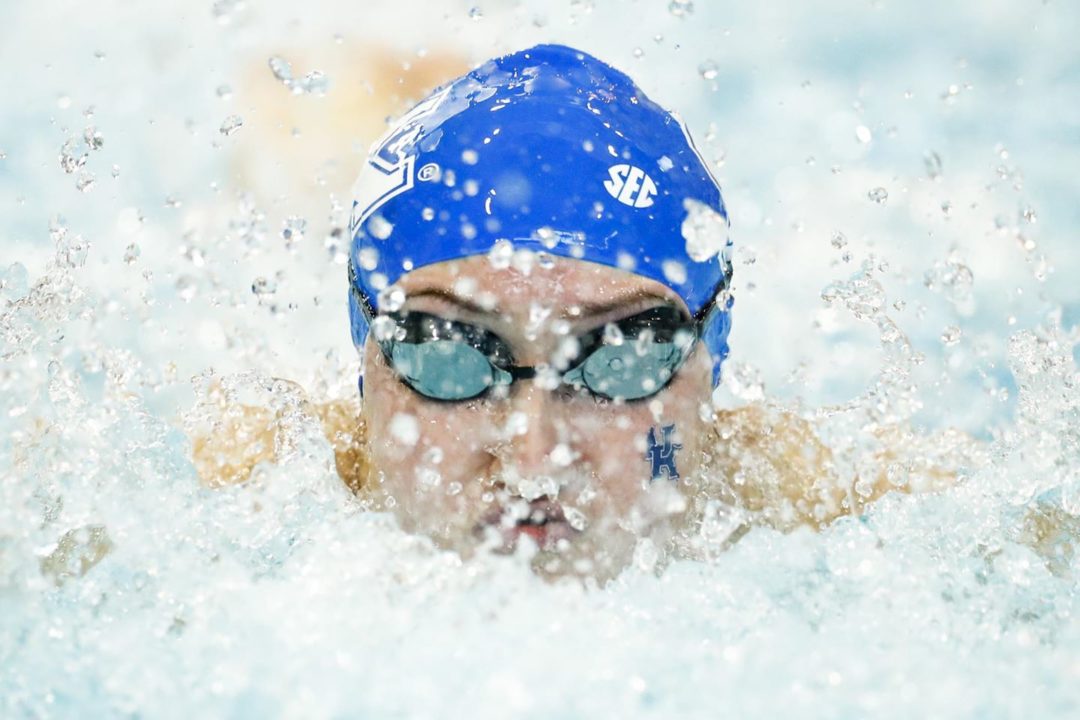 Kentucky's Riley Gaines won the 100 free and the 200 fly on the final night of the Mizzou Invite, helping the Kentucky women to a decisive victory. Current photo via Kentucky Athletics

The Kentucky women finished things off in Columbia by winning 4 of the 5 individual events on offer on the final night of the 2020 Mizzou Invite.

Beth McNeese kicked off the session with a win in the mile, snagging an NCAA ‘B’ cut in the process with a 16:04.07. This chops 9 seconds off her previous lifetime best from the 2020 SEC Champs. Arkansas’s Peyton Palsha finished 2nd in 16:06.43, about 4.5 seconds off her best time but 25 seconds ahead of the 3rd place finisher, Allison Bloebaum from Missouri who touched in 16:31.59.

Kentucky followed that up with a 1-2 victory in the 200 backstroke where Caitlin Brooks and Sophie Sorenson finished in 1:51.55 and 1:54.44, respectively. For Brooks, that is a best time by 0.05 while Sorenson’s time falls about 2 seconds shy of her best. Kentucky picked up major points in this race with 5ht, 6th, and 7th place finishes.

Jack Dahlgren and Ben Patton held onto their top spots in the 200 back, finishing in 1:42.12 and 1:43.55, respectively. Matthew Connealy and Mikolaj Malec finished 3rd and 4th to give Mizzou a sweep of the top-4 spots. Dahlgren, Patton, and Connealy all snagged NCAA ‘B’ cuts. Kentucky finished 5th through 8th.

Missouri was very dominant in the 100 freestyle, taking 1st through 5th and 8th place, leaving only 6th and 7th to Kentucky. Danny Kovac won the men’s 100 free in a new lifetime best of 42.72. Daniel Wilson finished 2nd in 43.07, improving his pre-weekend best time by 0.35.