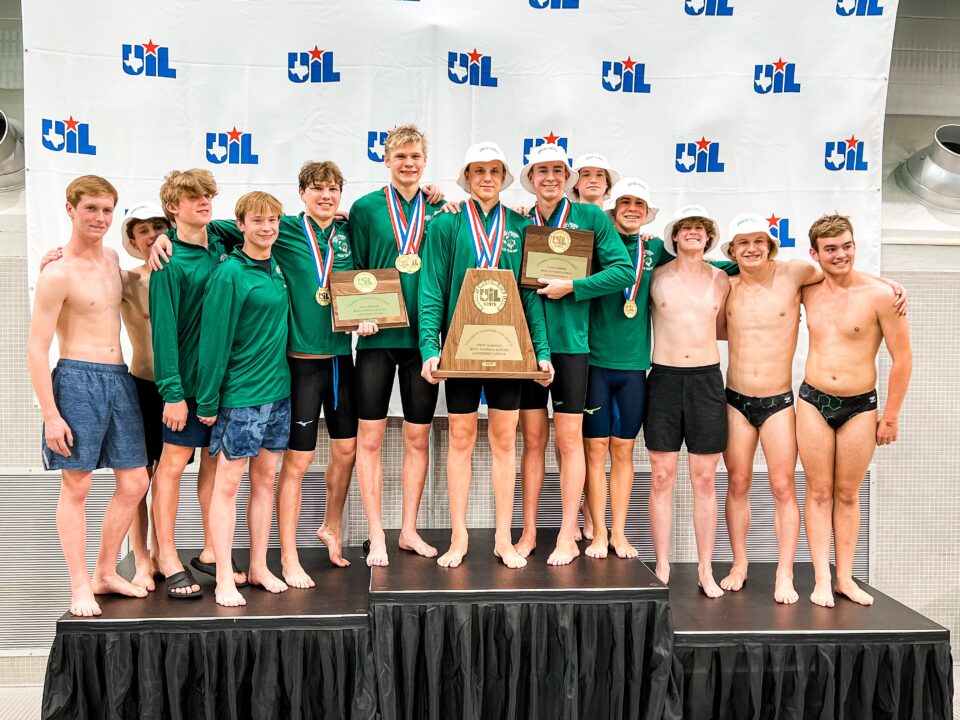 Maximus Williamson was part of four new State Records as he led Southlake Carroll to their 10th state title in 12 seasons, including one... Current photo via UIL Texas

After a chaotic season that saw last year’s meets impacted both by the COVID-19 pandemic and by winter storms, this year’s Texas State Championship meet went off without a hitch in Austin over the weekend.

That includes four new Texas High School State Records, and not a single individual state title in Class 6A, for the biggest high schools, being won by a senior.

The Southlake Carroll girls also won the 6A title.

Indicative of the young wave of talent sweeping through the state was freshman Maximus Williamson.

He attends Southlake Carroll High School, which has been the state’s dominant program over the last decade. The Dragons won 9 consecutive Texas High School State Championships from 2011 through 2019 but have lost the last two meets to a pair of the state’s blueblood programs: Kingwood and The Woodlands.

But with Williamson leading the charge, the Dragons could be lined up to start another streak after he swam, and won, two races individually in the state finals on Friday.

First he swam 1:43.70 in the 200 IM. That time cut 1.2 seconds off the old State Record that was set by Gray Umbach in 2012. Umbach, an age group wunderkind, went on to swim collegiately at Stanford.

He was about half-a-second faster in this race at Winter Juniors in December, where he won both IM races and ranked himself as the third-fastest all-time in the 15-16 age group, in spite of being on the younger end of that range.

Later in the session, Williamson won his 2nd individual event, the 100 back, in 48.36. While that was not a new State Record, Williamson showed grit when he slipped off the start and had to make up about a body length on the field, still coming back for the win. He was still within a tenth of a second of his personal best time in the race.

But the race there wasn’t against the record – it was against the two relays swimming next to the Dragons.

The top three finishing teams were all under the old State Record: Kingwood placed 2nd in 1:21.53, and Clements finished 3rd in 1:21.62. The next-best split behind Williamson was a 19.90 from Clements anchor Hayden Bellotti, a Virginia commit.

In all, there were 20 splits sub-21 seconds in the finals alone, with three of those being sub-20: besides Williamson and Bellotti, Westwood High School junior Sonny Wang led off his team’s 6th-place relay in 19.99, joining the sub-20 second club.

His previous best was a 20.03 from Winter Juniors West.

Williamson’s final act might have been his best: he led off Southlake Carroll’s 400 free relay in 42.98. There he combined with Mason Edmund, Max Hatcher, and Andrew Zettle for a 2:58.10. That broke the State Record of 2:59.39 that was set in 2017 also by Southlake Carroll – a relay that included future World Championship bronze medalist Jack LeVant, among others.

That time individually for Williamson also broke the Texas State Record in the 100 free that previously belonged to Jimmy Feigen of Churchill High School. Feigen would go on to win medals at the 2012 and 2016 Olympic Games and win the 2012 NCAA Title in the 50 and 100 freestyles.

The swim makes Williamson, who is still only 15, the 3rd-fastest 100 yard freestyler in 15-16 age group history behind only Ryan Hoffer and Jack Alexy.

So far this season, 15 high school swimmers have been under 20 seconds in the 50 yard free. Three of those swam in this meet.

Wang would come back after the diving break and win the 100 free in 43.38, which is just three-tenths shy of Jimmy Feigen‘s State Record in the event. That’s Wang’s lifetime best by half-a-second

Williamson wasn’t the only budding star swimming at this meet. USA Swimming Junior National Team member Cooper Lucas won the 200 free in 1:35.29. That’s a lifetime best for him by just over a second.

Lucas came back later in the session to win the 500 free in 4:19.86, which missed his best time by about a second. He finished in 2nd place in that event last year.

The class breakdown by individual event winners for the meet is as followed:

This means that all 8 individual event champions are eligible to race again in this meet next season.

Other Texas 6A Boys State Champions:

Happy to see René Descartes celebrated on the other side of the Ocean.

Absolutely, math and philosophy should be on the Mount Rushmore of combinations.

All of the videos were posted on this channel
https://youtube.com/channel/UCzt4g4ZV_kvn2tLWdKki1qQ

https://www.youtube.com/watch?v=GOmAKrgKxfQ&t=7s Here is the link to Southlake’s record breaking relay swim and Maximus’ 42

Short underwaters, that wasn’t what I was expecting. Hopefully, that means he translates to long course really well.

Just took a look at the meet results and I feel like not enough credit is being given to brown on how great of a meet he had 1:45 low 2im, 53 low breast, and 20.2 50 free is pretty fast in its own right. Def put himself in the conversation for top 5 in his class.

Such a great swimmer! I think he won swimmer of the meet.

And he is not a Clear Lake swimmer.

Every time I see one of these headlines I get excited, but I also start to fear for the swimmer who’s about to have so much pressure to continue to perform. I hope he keeps swimming fast, but for his own enjoyment and fulfillment.

After a few posts this weekend, I was very much over the “(x) fastest freshman in (y)” posts.

..until I finished reading the headline and realized it’s a high school meet. Great googly moogly.