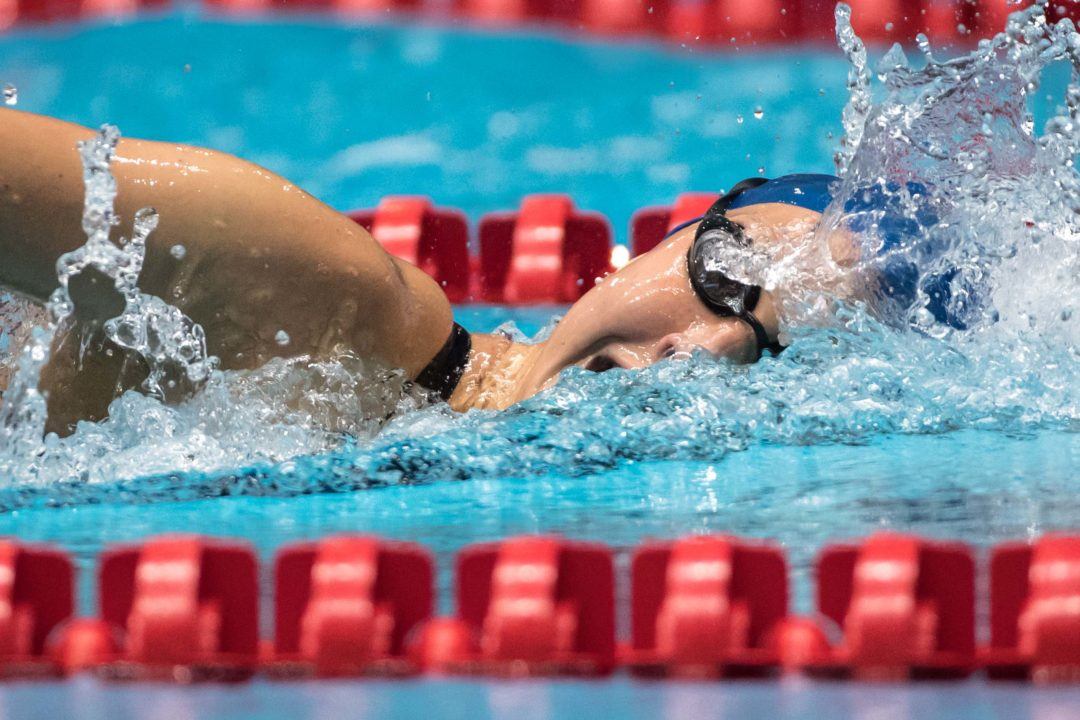 In their final dual meets of the 2018-19 season, the Kentucky Wildcats travelled to the Cincinnati Bearcats on Friday. The Kentucky men and women swept Cincinnati 156-101 and 157-100, respectively.

The Kentucky women won 11 events over Cincinnati and exhibitioned all swimmers in the final 2 events. The meet kicked off with a Kentucky win in the 400 medley relay with a time of 3:43.62.

After the relay, Kentucky senior Geena Freriks swam to a win and a new school record in the 1000 free.. Her winning time of 9:30.78 set a new Kentucky program record, eclipsing the previous 1999 mark of 9:41.53, set by Rachel Komisarz. Freriks’ time also ranks 19th all-time for the women’s 1000 free. Freriks showed her versatility later on in the meet when she won the 50 free with a 23.22.

Along with Freriks’ 50 free win, Kentucky kept the ball rolling with wins in the next 4 events:

In the 100 free, Cincinnati teammates Olivia Schemlzer (51.61) and Abby Johnston (52.20) broke the Kentucky winning streak with their 1-2 finish.

The 100 fly had the closest race for the women’s meet, with Kentucky’s Izzy Gati and Cincinnati’s Simone Palomo duking it out. Palomo was first to the wall in the first half of the meet, taking it out in a 26.78. However, Gati out-split Palomo in the last 50 to out-touch Palomo 56.75 to 56.95.

In the 400 IM, Camryn Streid (4:27.22) earned Cincinnati their second win of the evening. Kentucky’s Asia Sedt had the top time in the event with her exhibition time of 4:17.32.

The 200 free relay featured a tight race between Kentucky and Cincinnati. Kentucky had the top time in the event of 1:34.40, with Geena Freriks’ 23.16 anchor split. However, Kentucky exhibitioned their relay swims. Cincinnati then took the win in the event with a 1:34.72.

The Kentucky men had top times in 11 events, along with exhibitions in the last 2 events. The Wildcats kicked the meet off with their 400 medley relay win of 3:19.43. Kentucky kept their winning streak alive in the next 4 events:

Parker Saladin earned Cincinnati their first victory of the meet in the 200 fly as the only man under 1:50 with his time of 1:49.48.

Blake Hanna gave Cincinnati their second victory of the meet with his dominant performance in the 200 back (1:47.80).

In the 200 breast, Kentucky’s Austin Haney had established a comfortable lead until Cincinnati’s Dom Polling challenged Haney in the last 50. Despite Polling’s 31.35 split, Haney was able to hold off Polling 2:03.14 to 2:03.55. In a similar situation, Cincinnati’s Din Selmanovic broke off from the lead trio in the 500 free in the last 100 yards of the race to finish first in a 4:29.64.

UK is really doing well these days. Congratulations to the swimmers, divers and coaches.