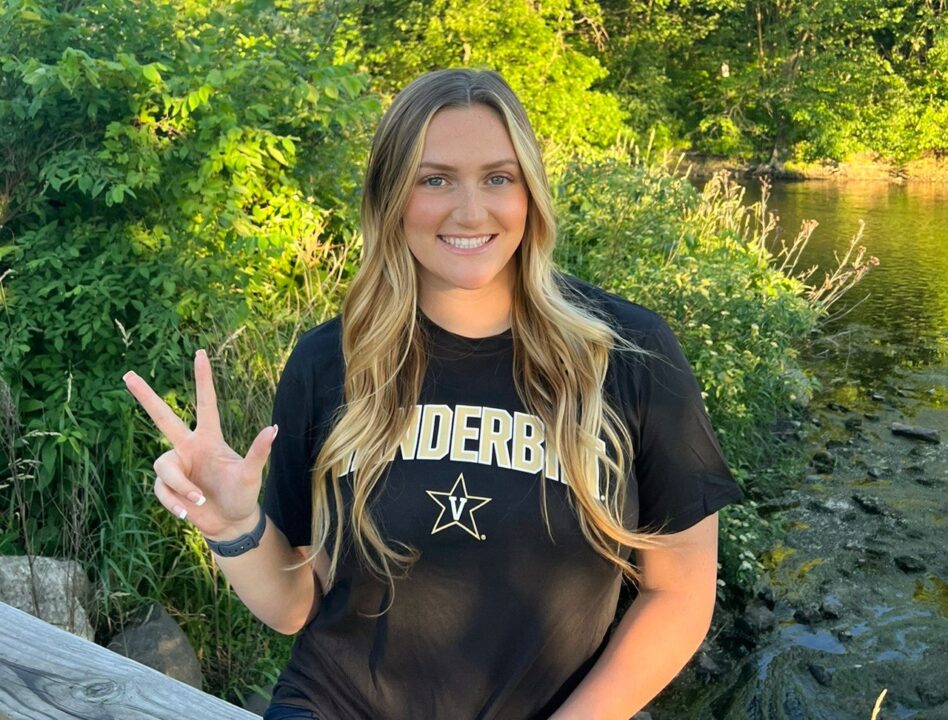 Megan Ciezczak, an Illinois native and freestyle specialist, has announced her decision to transfer to Vanderbilt University after spending one season at the University of Kentucky. Ciezczak graduated from Neuqua Valley High School (Naperville) in 2021 before joining Kentucky for the 2021-2022 season. Both Kentucky and Vanderbilt are Division I programs in the SEC Conference, which Ciezczak was not selected to compete in last year.

I’m super excited about my opportunities at Vanderbilt in and out of the pool. It was a really hard decision to enter the portal because Kentucky is a great school and I made a ton of friends but ultimately I feel like Vanderbilt will be a better fit for me.

Ciezczak is a sprint freestyle specialist, nearly always competing in the 50 and 100 freestyle, and occasionally throwing in the 200 free or 100 fly when she needs more events. While at Kentucky, she competed in the OSU Fall Invite, where she swam the 50 free, 100 free, 200 free, and 100 fly. Her highest finish was in the 100 free, which was the only event she made finals in. She finished 36th with a season best of 51.63.

Ciezczak also set two new personal best times at the OSU Fall Invite, showcasing the developments and improvements she made while training at Kentucky. In the 200 free, she dropped .35 seconds to post a 1:53.34. In the 100 fly, she managed to take off nearly a full second, finishing in 58.47 seconds.

Prior to her time at Kentucky, Ciezczak swam for the Fox Valley Swim Team in Naperville, Illinois. Back in 2019, Ciezczak competed in the Illinois High School State Championships where she finished 14th in the 50 free and was a member of multiple relays. In 2020, which was Ciezczak’s senior season, a State Championship was not held due to COVID-19.

At the 2022 SEC Championships, Kentucky finished 2nd and Vanderbilt finished 12 out of 12 teams. Although Ciezczak did not get to compete at SEC’s with Kentucky, she likely will be able to next season while at Vanderbilt. In the 50 free, her best time would have put her just a few places shy of qualifying for the C-finals. Additionally, she would have been the top finisher for Vanderbilt, as their top finisher last year finished 46th with a 23.29.

The SEC changed its intra-conference transfer rules starting in the 2021 season. The new rules allow an athlete to compete immediately even after moving from one SEC school to another without having to sit out a season, meaning Ciezczak will be able to compete with Vanderbilt right away in 2022.

In addition to the transfer of Ciezczak, Vanderbilt has a number of top 2022 recruits that will be joining the team for 2022-2023. These include Tennessee natives Ellie Taliaferro and Meredith DiPasquale, as well as freestyle and backstroke specialist Hannah Weissman from Washington.

Kind of a weird decision to make to me… transferring out of a program that won an SEC title 2 years ago to go to a school that consistently finishes last in its conference and has worse academics.

No. Kentucky definitely does not have “better academics” than Vanderbilt.

I’m curious as to why you think UK academics > Vanderbilt. While I personally think the student matters a lot more than the school and that kids can be successful coming from anywhere (especially if they’re a D1 athlete), there are some schools that are simply more academically inclined than others.

Ever been to Vandy? They are there to play school. Great academics compared to the rest of the SEC.

Based on the times, probably overtraining

First of all – Vanderbilt does not have worse academics than Kentucky by basically any metric. US News ranks Kentucky 127 and Vanderbilt 14. There are of course legitimate quibbles about US News rankings, but a gap of that size cannot be overridden by ‘personal opinion.’

1) She wasn’t on Kentucky’s SEC roster. She will be on Vanderbilt’s SEC roster. There’s nothing wrong with wanting to be a part of the squad – not everyone has the Texas “I’d rather watch an NCAA title team than swim on a non-title team” approach to life. Sports used to be about the joy of participation, not the need to win.
2) She’s a fine swimmer, certainly better than I… Read more »

Please show us on the globe where we asked for your dog water opinion on this matter. Also please post your lifetime best times from the Summer League World Championships.