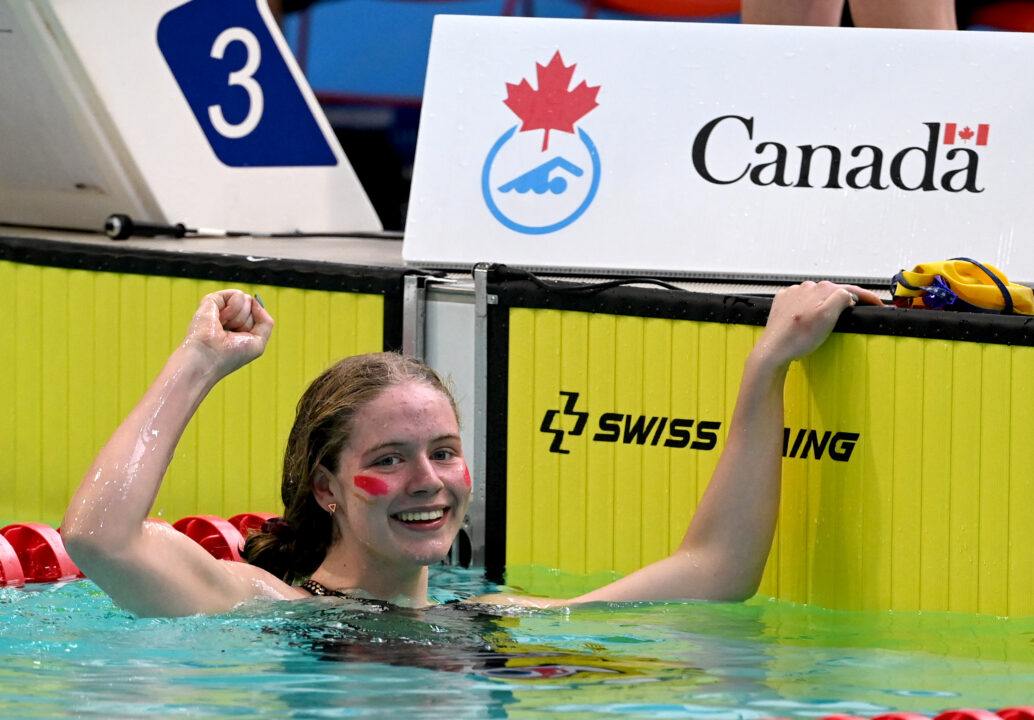 Maxine Clark put an exclamation point on a sensational week with triumphs in the girls' 13-14 50m freestyle (26.50) and the 4x100 medley relay on Sunday. Current photo via Swimming Canada/Scott Grant

MONTREAL – The pool portion of the 2022 Speedo Canadian Junior and Senior Swimming Championships came to an end on Sunday with the final 12 gold medals handed out at Montreal’s Olympic Park pool.

The championships officially conclude on Monday with four open water races at the Olympic Rowing Basin, starting at 8:30 a.m.

The eight-day competition is Swimming Canada’s first non-trials national meet since 2019 and marks the first-ever Canadian championships combining junior and senior events.
A total of 633 swimmers and Para swimmers from 142 clubs across the country are competing in age groups ranging from 13-14 (women) and 14-15 (men) all the way up to the senior level.

Maxine Clark from the University of Calgary Swim Club put an exclamation point on a sensational week with triumphs in the women’s 50m freestyle 13-14 age group final (26.50 seconds) and the 4×100 medley open relay. The 14-year old Calgary resident concluded the championships with a remarkable nine gold medals, including five in individual events, and two silvers.

“My win in the 50 free was unexpected. It’s the last day of the meet, I’m tired, that was a lot better than I thought I could do,” said Clark, who kicked off the competition on Monday with a Canadian age group record in the 100 butterfly and received the Canadian Female High Point Aggregate award in her age group for her overall performance. “This was a long meet. I’ve just been trying to do my best and have fun.”
Meanwhile, a pair of rising stars from British Columbia also added to their gold medal collections in the men’s 1500 freestyle finals.

“This week I just wanted to focus on PBs and maybe get some provincial records,” said Kim, who set a national 13-14 age group mark in the 800 free on Wednesday. “Overall, I think it was a very good week for me. I think I could have done better in some events but overall I’m very pleased with my races.”
In the 16-18 final, Surrey’s Yu Tong Wu from the Surrey Knights Swim Club clocked 15:52.28 for a close win over Lorne Wigginton from the University of Calgary Swim Club (15:54.26), who will be his teammate next month at the Junior Pan Pacific Championships in Hawaii. The 17-year-old Wu wraps up the meet with five gold and seven total medals, including previous victories in the 200, 400 and 800 free as well as the 100 butterfly.

“Coming into this meet I knew it was going to be really hard. Other than Trials, there are very few meets that run that long,” Wu said. “After seven days I’m pretty exhausted. There won’t be much time to rest before Junior Pan Pacs but we’ll be ready.”

In a thrilling women’s 50 free 15-17 final, Christey Liang from the Edmonton Keyano Swim Club prevailed in 20.09, one hundredth of a second faster than her Junior Pan Pacs teammate Kamryn Cannings from the University of Calgary Swim Club and Leilani Fack from the Langley & Abbotsford Olympians, who tied for second. Liang had already captured the 100 free title earlier in the competition.
In Para swimming, Shelby Newkirk from the Saskatoon Lasers Swim Club set her second S6 national record of the week by winning the women’s 50 free multi-class final in 33.53. The Tokyo Paralympian, who had set the previous mark of 34.20 at the Canadian Trials in April, also lowered her own national standard in the 100 free S6 on Saturday.

“It’s been an amazing week. It’s everything I could have asked for,” said Newkirk, who merited the Canadian Para Female Top Swim of the Meet award thanks to her gold-medal time of 1:22.46 in the 100 backstroke on Wednesday. “I had these goals at the beginning of the year, and to be able to get Canadian records and all-time personal bests at the end of a very long season, I’m very proud of all the work myself and my new coach Ryan (Jones) have been doing.”

Also setting a Canadian Para swimming mark in the women’s 50 free was Alisson Gobeil of Club de Natation de Chicoutimi, who clocked 43.30 in the morning preliminaries to better the previous S5 standard of 46.42 held since 2002 by Marie Dannehaeuser.

Below is a complete list of national champions from Day 7 as well as championship award winners.