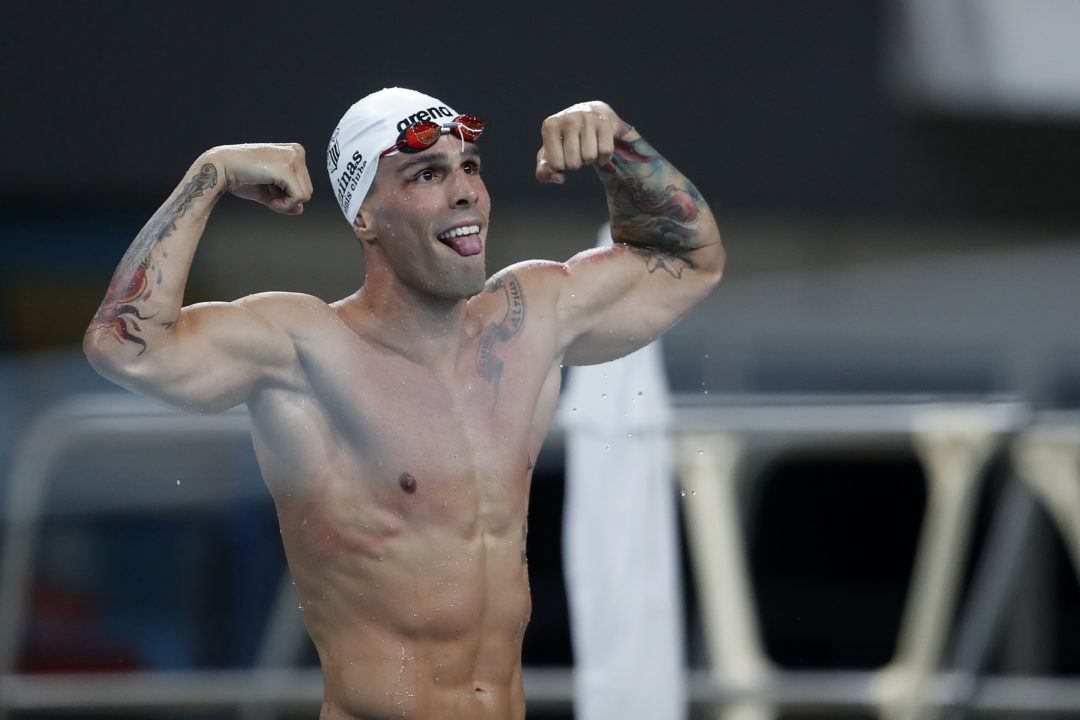 Per Brazil’s Lance.com, Fratus suprassed countryman Cesar Cielo for the title of most sub-22 swims in the morning semifinals, going 21.92 for his 59th career 21. In the final, he beat young American Michael Andrew 21.64 to 21.92 to hit 60 times cracking 22 seconds.

Fratus has become a pretty historic 50 freestyler – a month ago, he went 21.76 while taking three breaths – almost unheard-of among elite sprinters. Fratus currently sits second in the world ranks for the season and was last summer’s World Champs silver medalist in the 50 free.

The second day of the Monaco Mare Nostrum stop featured “Speed Tournaments” or multi-round knockout events of 50s in all four strokes for both genders.

After a Ukrainian record in the early rounds, Andrii Govorov was just a tenth off the world record in winning the 50 fly final. He was 22.53, with the world record standing at 22.43 from the super-suit era. Govorov also beat Andrew (23.16), who was second in a pair of 50 meter races.

For the women, Japan’s Rikako Ikee won one speed tournament and finished second in another. Her 25.53 won the 50 fly by more than a full second, a massive blowout. She was 25.18 in the 50 free, but couldn’t come close to Olympic champ Pernille Blume, who was 24.05 for Denmark.

Russia’s Yulia Efimova won the women’s breaststroke in 30.17, with American Molly Hannis taking a DQ in the final. The men’s race went to Japan’s Yasuhiro Koseki in 26.94. Russia went 1-2 in the three-person women’s 50 back. Anastsiia Fesikova was 27.37 after tying Mimosa Jallow for second in the semifinal. Those two competed alongside eventual runner-up but top semis qualifier Mariia Kameneva. The men’s backstroke went to Nikita Ulyanov, also of Russia, in 25.03.

In addition to the speed tournaments, the final day featured the remaining Olympic events, with a few standout swims. Yasuhiro Koseki was dominant in the men’s breaststrokes, going 58.78 to improve his 2nd-ranked time worldwide for the season.

Russian youngster Kliment Kolesnikov was 1:58.59 to win the 200 back, well off his season-best, but a half-second ahead of the field.

The women’s field had a handful of speed tourney winners double up. Rikako Ikee took home the 100 free in 53.64, beating France’s Charlotte Bonnett. Russia’s Yulia Efimova paced out the women’s 200 breast, going 2:23.80 to win by almost half a second.

Meanwhile world record-holder Katinka Hosszu topped the 200 IM in 2:10.06. In the 100 back, American Kathleen Baker stayed hot, going 59.33 to beat Fesikova by a tenth.

I read the first 4 words of the title and had a mini heart attack. Luckily, I survived that and read the rest which brought it back down to earth. It’s a highly impressive accomplishment nonetheless. Consistent high level performance over a long period of time.

It’s early days yet, but I wonder if one day Andrew will take a shot at that record. He’s very young and after hitting 21 for the first time last summer, he’s been very consistent hitting 21s at least 6 or 7 times this season.

PVDH may be right. Dressel will break it by 2020 at the latest, maybe he could bring it down to 20.7, who knows his limit. Andrew will rise in the future though, and don’t forget Proud and never leave out Fratus.

Unless Dressel/Proud is going to swim a ratified 50 long course every day from now until September, that seems very unlikely.

By its nature this record will likely always belong to swimmers approaching the end of their career, normally ones who swim a heavy in season schedule.