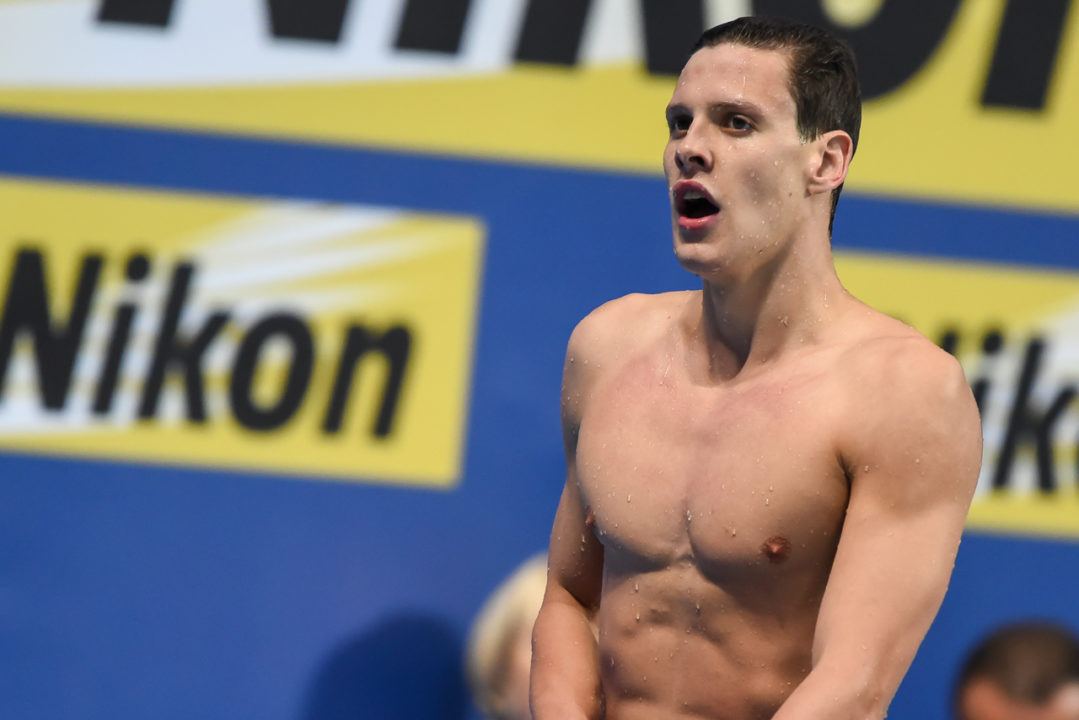 "Jacco said to me that if you have 1% of doubt in your mind, it's too much and I did have those doubts," said two-time Olympian Mitch Larkin of his time with Simon Cusack. Archive photo via Peter Sukenik/www.petersukenik.com

More than a month removed from a lackluster showing at the 2017 World Championships, Australian backstroking ace Mitch Larkin is returning to his roots. With only 7 months of working with new coach Simon Cusack at Commercial Swimming Club under his belt, Larkin is making his way back to St. Peters Western.

After a break-out World Championships in 2015 where he won 100m and 200m backstroke golds, Larkin raced to silver in the 200m backstroke at the 2016 Olympic Games. Somewhat disappointed with nothing to show for his 100m race, as well as finishing runner-up in the longer backstroke event, Larkin was looking for something new training-wise after having been with storied coach Michael Bohl at St. Peters Western the previous 9 years.

After trying out several different coaches within Australia, Larkin settled on Cusack at Commercial, acknowledging that he was taking a step in a new direction training-wise. At the time of the change, Larkin stated, “The volume of work was the concern for me because I was used to doing five or six kilometres a session, for 10 sessions a week, and Simon does nine sessions a week with 5km in the morning and less in the evening, but the quality and intensity of that second session is higher.

“It’s very different to what I’ve done before. There’s a lot more of a speed base to it, the intensity is a lot higher and I feel like I’m swimming better more frequently in training. Because there’s more work at race pace I feel like I am practising better stroke technique more often.’’

Not able to completely buy-in to his new training regimen in such a short time prior to this year’s World Championships, Larkin performed sub-par across his events in Budapest, finishing 6th in the 100m and not even making the final in the 200m or 50m backstroke races.

While in Budapest, Larkin ruffled some feathers by stating, “The goal wasn’t to win the 100 here, if I wanted to defend my title I wouldn’t have changed coaches and had a bigger break after Rio.” The national record holder stated that he’d “go home and tweak things with Simon, he’s a good coach and there are some areas in the backstroke that we can work on.”

Instead of tweaking his system with Cusack, however, The Australian, is reporting that Larkin is doing a full-on 180, moving back to St. Peters Western. There will still be change involved, however, as Bohl has since moved on to the new High Performance Center at Griffith. Larkin will fall under the fold of Bohl’s former assistant, Dean Boxall. Boxall has been making a solid name for himself as of late with junior stars Ariarne Titmus, Jack Cartwright and Clyde Lewis.

Helping Larkin see the need to return to his former method of training was Aussie Head Coach Jacco Verhaeren. Larkin told The Australian, “One of the major questions for me was whether Simon was the best fit for me. I have huge respect for him but Jacco said to me that if you have 1% of doubt in your mind, it’s too much and I did have those doubts.”

Due to his high endurance background, Larkin said he was ‘psychologically unsuited to Cusack’s high-quality, low-volume approach. As such, Cusak’s program wound up being a ‘step too far in the opposite direction.’

‘I grew up doing a lot of hard work with Bohly, a lot of grinding through high volume and I just missed that element of working hard in a big group of swimmers who were all pushing hard twice a day.

“Mentally I was trying to buy in to the new approach, but I couldn’t get over the hurdle of not having done the work I had done previously.”

Does anyone know if SPW decided to name Boxall as their HC yet or had it already happen? If Boxall is indeed taking over Bohl’s squad including Larkin, who will take over Boxall’s intermediate squad is another interesting point to see as that squad is loaded with lots of talent, two World Championship finalist already and many more future Australian national potential swimmers.

I am happy for him, and I like Larkin, but I sadly think his time in the spot light is done. Murphy had a great rise in 2016, Jaiyu is another young swimmer to have emerged, but I think the person who will dominate this cycle is Rylov. He is younger than Murphy, and please don’t take this the wrong way, but he seems to somehow even be more talented than Murphy. He opted to not swim the 100 in budapest, but with the way he swam his 200 snd his 24.5 50 speed, I think he would have been in contention to win. Backstroke is in great shape right now world wide, and Larkin being back in the equation… Read more »

Murphy had an off post olympic year and Rylov had a very good one, but he is by no means dominating the next cycle. As Murphy returns to form the backstroke races will be very… Read more »

Clearly Mitch is gunning for the Olympic gold and after seeing Murphy with a sub par performance this past WC Mitch is patiently waiting to get another shot.

fix that stupid crossover kick and maybe you can shred again. But crushing mega yards isn’t gonna do it.

He did those amazing times in 2015 with “that stupid crossover kick” so the solution might actually be getting back to high yardage. Larkins technique requires a lot of power and endurance in his arms especially (due to the lack of kick) and if he isn’t training the longer yards he will have trouble sustaining it for a 200.

same training = same results. base building for 200 events is ASCA propaganda, not physiology. and hitting times from 2015 likely aren’t going to cut it anymore, especially with Jiayu and Murphy both under 52 now in the 100, and Rylov’s continued rise in the 200. So rather than looking in the rearview, perhaps its time to consider something tangible like getting better at underwaters and cleaning up his kick. However he justifies his training, I agree it depends on the athlete and what gives them confidence; if they like high volume to feel like they did a lot of “work” then go that route. But address the technical deficiencies. Seems like step one, and neither Coach Bohl or Cusack… Read more »

Whatever . It is Mitch’s life not yours .

There were probably some hints of the upcoming split with SPW so that may’ve been a contributing factor. SPW is based in western suburbs of Brisbane whereas Bohl’s new situation on the GC may involve a considerable round trip especially when he is also juggling University.

But probably more of a factor was the fact that the entire Bohl stable had poor/sub-standard Rios. Larkin himself was making the same technical errors (circling the lane) in Rio that he was at AUS Trials (why didn’t Bohl address this ?). Wilson was poor; Bohl’s own daughter “imploded”. Bohl is an excellent coach but he’s not bullet-proof; much of his rep was made due to Rice.

Agree with everything but the Rice comment. He was responsible for like half the olympic team in 2012

Actually Barratt WAS good at both London & Rio. Groves was excellent in her pet event; awful in 100fly & med relay heats. Sorry but you’ve overstated your case re 2012 team. He had Rice, Nay, Barratt, McKendry, Monk, Larkin.

My point is that Rice is the ONE pupil of his who has actually gone and “done the business” at the peak of the sport. Others have performed well/medalled at this level but not stepped up that extra level. Larkin arguably did so at Kazan but either that was his “meet of a lifetime” or he and Bohl somehow dropped the ball between then and Rio.

Plus Yolane Kukla , plus Liesel Jones both of whom earnt relay medals . Yo with a 54.00 heat swim for gold & liesel in the medley relayheats & finals for silver . What about Ryan Napoleon? I think he was there too .

Yes I checked . That makes 9 .i think Bohl gives his swimmers a lot of latitude in all aspects . Some like Stephanie were just better racers than others. Its only now we realise how special she was .

Was Jones with SPW, thought she was down in VIc for the bulk of her later career ?? Napoleon was SPW at one stage. Kukla …. lets just say that she’s been at more clubs than a socialite

I will completely agree with you re Rice; whatever else you can say about her; she was a tough steely competitor when it came to the big events. Even in London when her shoulders were shot to bits; she was able to will herself into Olympic finals.

Yes Liesel finished out her career at SPW . Ryan was SPW till post 2012 when he went to Palm Beach for a while whilst considering retirement .

Yo was only ever at SPW starting in Michael Palfrey’s jnr squad & relocating with him to Arena in WA post London . In late 2015 she returned to Qld was listed as Southport but never competed for them , & then did some training at Somerset just playing with the 50 . That is 3 clubs in 9 years . Thats possibly an average for an Australian swimmer .

There are pics of SPW Olympic members at a Crossfit gym in about May 2012 with all of them .

When is it the athletes responsibility to fix mistakes?