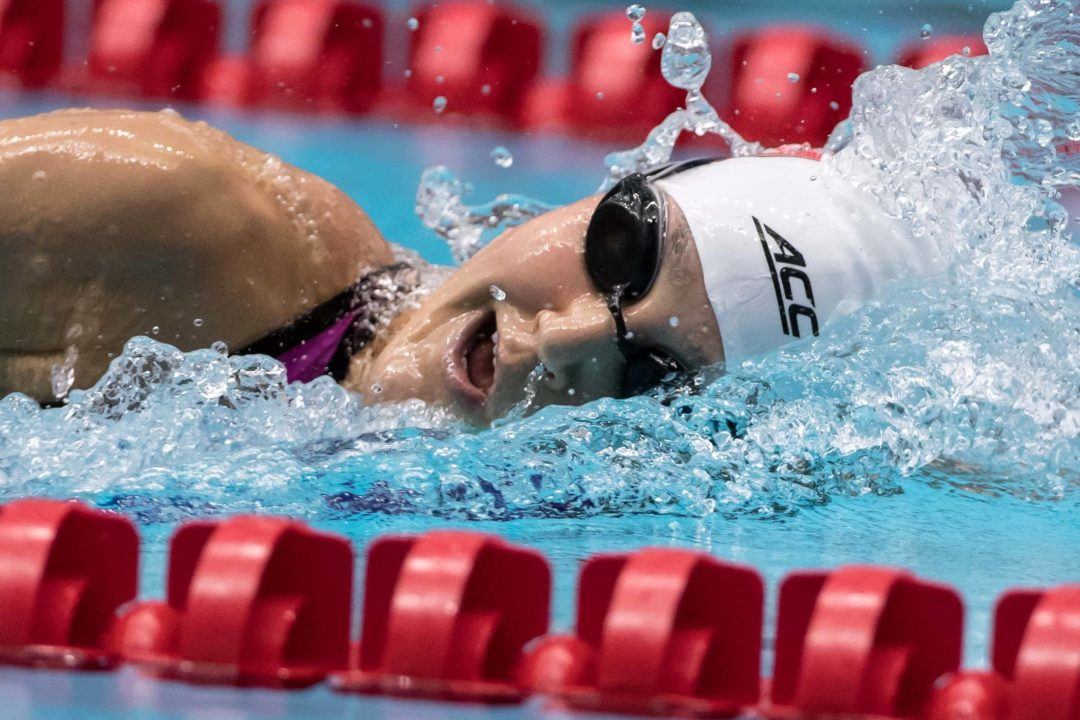 NC State is loaded in the freestyles, with distance specialist Hannah Moore coming off a big summer.

A couple of seniors led the NC State Wolfpack to a 7th place finish last year. Alexia Zevnik was huge for the NC State, swimming to a runner-up position in the 200 back, placing 6th in the 200 IM, and putting up a B final swim in the 100 back to total 36 points at NCAAs. She also swam on three relays, while Kayla Brumbaum posted two A final showings in both breaststrokes.

In one of the relays that Zevnik was not on, the 200 free relay, the Wolfpack all turned in sub-22 performances and combined for a fourth place finish at NCAAs.

Hannah Moore was another top contributor for NC State, hitting 5th place finishes in both the 500 free and 1650 free.

NC State had a great 2016-17 season, looking much deeper than they ever have and rounding out a season without any significant lineup holes.

There will be some sprint power to make up with Zevnik and Labonge gone, but the incoming class is extremely capable of smoothing over those absences. Transfers will be most readily available to help out, as they have NCAA experience and are fast enough to contribute at least on relays.

Sirena Rowe, a transfer from Marshall, has been 22.08 in the 50 and 49.53 in the 100, but her 50 is really what’s eye-catching. It took a 22.00 to TIE for 16th in prelims last year at NCAAs in this race, so she’d have to make a little improvement to score next year, but she will definitely be a strong addition to the NC State group. Lexie Lupton is another strong sprint transfer, from Texas A&M. She’s a little better than Rowe in the 100 and a little behind in the 50, with bests of 22.4/49.0.

Ky-lee Perry split a 21.90 leading off NC State’s 4th place 200 free relay at NCAAs last year and finished 18th individually, while Courtney Caldwell scored in the 100 free and anchored their 400 free relay with a very quick 47.14. Krista Duffield was also a member of the 200 free relay, and she returns for her senior season with the Wolfpack.

The three returners Perry, Caldwell, and Duffield will make for the centerpiece of the sprint group, and between the freshmen and transfers, there are four additions to the team that are primed to make a difference.

Hannah Moore will be taking care of things in distance free, and after a trip to the World University Games this summer where she produced a 1500 free bronze medal, she’ll be hungry for a top finish at NCAAs in her senior season. It would be hard to bet against her finishing in the top 5 again in both the 500 and 1650 free, and Leah Smith graduating makes it easier for her to climb.

Florida State transfer Summer Finke and freshman Tamila Holub are two newcomers who could be big for NC State. Finke’s best time in the 1650 free is only 16:15.07, but she went 16:22 (meters) at Worlds Trials this summer to place 6th overall in the 1500, and after a big summer from her in LCM, she looks ready for some big SCY drops. Holub, from Portugal, has been 8:36/16:20 to Finke’s 8:34/16:22, and paired with Moore, the three of them will be pretty dangerous.

The only swimmer on the roster right now with a chance to score in either IM race is Hannah Moore, who just missed scoring at NCAAs in the 400 IM last year with a 17th place finish in prelims.

Senior Krista Duffield is a solid flyer, and she’ll take Labonge’s 200 medley spot, most likely. Duffield split a 51.81 fly on their 400 medley relay which finished 10th at last year’s NCAAs.

Duffield was unable to get close to individual scoring in this race, though, and NC State sent nobody to NCAAs in the 200 fly. The incoming class is pretty absent of butterfly speed, though Canadian Danika Huizinga has been 1:00.7 in LCM, which is solid.

Still, there probably won’t be any individual points from the fly group at NCAAs.

Elise Haan scored in the 100 backstroke last year, and she should bring in several more points again in the 100 next year, too.

Zevnik’s loss definitely hurts the backstroke group substantially, though Haan and Mackenzie Glover are solid on their own. Glover is more of a 200 specialist, and she finished t-29th in the 200 back at NCAAs with a 1:53.72, while Haan was a half second back in 35th.

Brumbaum’s departure is going to be much harder to handle than Zevnik’s, since there isn’t much on the roster to replace her with.

The Wolfpack will have to look largely to the freshman class, specifically Jacquee Clabeaux and Calegan. Clabeaux has been 1:00.72 in the 100y breast, the fastest in the class and on the team, but she is strictly a sprinter and doesn’t extend well to the 200. Calegan has been 1:01.5/2:14.1, and will probably have a great 50 for the 200 medley, potentially, seeing as she’s a sprinter.

Anna Shumate (1:01.7) and Olivia Fisher (1:02.5) could develop nicely, too, in the 100. There’s material for the coaching staff to work with, but they’ll be hard-pressed to produce another talent like Brumbaum right away.

Freestyle will be the NC State women’s bread and butter this year. From the 50 to the mile, only the 200 free is a bit weak, and their pure sprint and pure distance races will be excellent.

The Wolfpack will need a freshman breaststroker to rise to the top for their medley relays, and Moore might be the only heavy-duty scorer on her own with Zevnik and Brumbaum gone.

There’s no reason to panic, though, as the incoming class is huge and with a lot of potential– and there’s plenty of speed on the roster already.

I think State has the firepower to win ACCs again this year but not the top end talent to go any higher at NCAAs. Hopeful for a top 10 finish and an ACC championship by the women.

Tolub isn’t on the roster yet. I wonder if she’s coming in mid year?

In terms of backstroke, aren’t you forgetting about Courtney Caldwell? She was just off scoring at last years NCAA’s and would have scored with her best time. Backstroke was insanely fast last year, but half the finalist (A: Smoliga, Laemmler, Moffit B: Karojas, Zevnik, Galyer, Mulquin, Toussaint) graduated and the only incoming freshman who really has the potential to score is Ashlynn Schoof. (51.98)