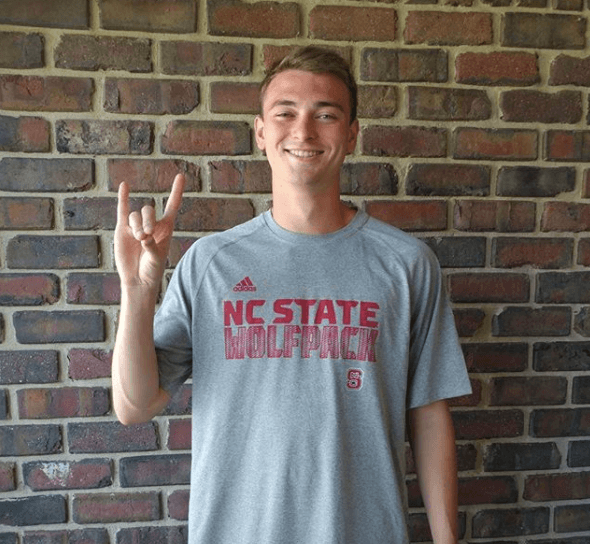 After three women have uprooted from their former programs to find a new home at NC State over the summer, Cobe... Current photo via Cobe Garcia

Louisville freshman Tatiana Salcutan threw down a personal best of 1:53.98 in the 200 backstroke to solidify her spot at the NCAA Championships.

After three women have uprooted from their former programs to find a new home at NC State over the summer, Cobe Garcia has done the same with a transfer out of the University of Kentucky. The Burlington, Kansas native will start up as a junior this fall at NC State.

Garcia currently ranks 8th all-time in the 50 free in Kentucky program history with his 19.70 collegiate (and lifetime) best, which he did at the 2017 SEC Championships. The story of his 19.70 is actually a funny one– he had initially tied for 16th, the last B final spot, with Texas A&M’s Adam Koster in the 50 free prelims with a 19.81. In the swim-off, both he and Koster tied again at 19.70, before Koster finally eked him out in their second swim-off. Garcia ended up in the C final, where he would place 2nd, and 18th overall.

Garcia’s not quite fast enough to score at NCAAs individually, though he’s only a few tenths off of that level in the 50 free. He could certainly become an immediate relay piece for the Wolfpack, too. He marks the fourth transfer this summer for NC State as a combined program, and he joins Molacek and Noah Hensley as newcomers this season on the men’s side (Molacek and Hensley each had a year off between their old schools and NC State).

How many sub 20 sprinters does NC State have at this point? It’s getting insane

How many does UNC have? Seriously? Any? While coaching and perhaps culture at UNC leaves a lot to be desired, I wonder how much the crushing defeats at the hands of NC State and just how much better NC state is than UNC, besides having weaker facilities and weaker academic school, has led to the men’s team decline at UNC

Sophomore Greg Brocato was a 20.01 in high school, but was 20.58 this past season at ACCs and wasn’t on their sprint free relay.

Alvin Jiang is a freshman coming in at 20.48 (much better as a 100 flyer though), but we’ll see how well he progresses this season. No other recruits coming into their sprints, though. They may have a 20.5 sprinter trying to walk onto the team as well (Jack Messenger, NCHSAA 4A state… Read more »

5
-2
Reply
Unnecessary much?
Reply to  Tarheel26

Who are you and what is your deal? I feel like any chance you get you bash on UNC.

9
-5
Reply
NCSwimFan
Reply to  Unnecessary much?

NC State student here, and saying that UNC is a bad school is objectively wrong. Both UNC and NC State are great universities with their own benefits (State has great engineering programs, UNC has great medical programs). Saying one is better than the other is either a biased fan of one of the schools talking, or just a wrong opinion.

Except if you look at the top individual school’s rankings, entrance requirements, and overall ranking it is not close. UNC is the better (by far) academic institution while NC State (by far) is the better coaching staff.

One of many many many unhappy alumni who want to see a change as the program is at all time lows….if you know anything about the history of UNC, to see State embarrass us is awful.

I’m not saying we beat state with a new coach, but no way we wouldn’t be more competitive

If you really are a UNC alum, you should give it a rest on these message boards and write a letter to the athletic director. I agree that the men had a rough year last year, but the UNC teams have been pretty good over the past few years, and the women just had two gold medalists at the world university games. In any event, your constant griping on this site accomplishes nothing (other than to potentially hurt UNC recruiting efforts).

Again who says I haven’t written a letter. I’m by far not the only UNC alum on here posting. Let’s not talk about the UVA alums on Augie, or the FSU alums or Arizona alums. That is what these message boards are for. Alumni are not happy. 2 swimmers having great success while teams are finishing worst ever in ACC is rough. The worst problem is there is nothing in the future that looks to change the trend. 3 of the coaches on the staff are alums and have to recognize this, but athletic dept definitely does not. DeSelm can not compete with young coaches like Holloway or skilled coaches like Albiero. Now with DeSorbo at UVA it’s game over.… Read more »

3
-1
Reply
Unnecessary much?
Reply to  Tarheel26

While I agree with some of your points, if you were a true “Tar Heel” as you say anonymously behind your computer screen, you should share your concern directly with the athletic department/personnel who can actually make a change.

It’s a rather spineless and quite frankly a childish act to throw a tantrum as consistently as you do my friend.

8
-6
Reply
Tarheel26
Reply to  Unnecessary much?

Why would anyone go to UNC-the most corrupt athletic and academic school around? If it wasn’t for Michael Jordan who would even know about UNC?

12
-16
Reply
Unnecessary much?
Reply to  Swimmer

haha good troll there ^^ “swimmer” . I can see you’re just trying to get attention now.

9
-2
Reply
Swimclh
Reply to  Unnecessary much?

An anon poster on swimswam isn’t going to sway someone’s decision to not commit to a school….

When you do consider UNC’s academic prestige and rich athletic history, it is hard not to ask what is up. AND unless more UNC alumni step up and complain about the program’s success, it will continue to decel.

I applaud Tarheel26 for pointing out where UNC needs improvement. It is hard to see the ACC develop the way it has, and not a thing change at UNC.

4
0
Reply
UNNECESSARY MUCH?
Reply to  Swimclh

I don’t disagree with your opinion.

UNC has been on a downward trend, there’s no doubt about that. But lets not get ahead of ourselves to “applaud” an anonymous poster. Is this the correct way to handle the issue? Is continually berating a program, coaches, and individuals at every chance possible the best way to make a change? Are you that delusional, self-centered and naive to think you’re actually having a positive influence?

Seems like if you focused your efforts into directing your concerns towards the people who CAN ACTUALLY MAKE A DIFFERENCE, you might have a little more luck.

0
-2
Reply
Tarheel26
Reply to  UNNECESSARY MUCH?

They don’t care! I have, I’ve tried. This isn’t football or basketball or baseball. This is Swimming. Athletic dept doesn’t care! It’s Swimming…hence our frustrations. If this was even Volleyball, Yuri would have been coach 2 years ago. perfect coach. He’s there. At least offer…if he declines, so be it.

3
0
Reply
Swimclh
Reply to  UNNECESSARY MUCH?

It makes no sense for you to complain on a (public) forum about someone’s opinion.

I agreed, so I supported. If it angers you this much, stop getting on swimswam…. haha

3
0
Reply
Swimmer
Reply to  Unnecessary much?

Students go around campus with tshirts “We are Jordan”.

Worth noting he splits 18 on the reg with the jump

Sad to see kids jumping ship for “greener pastures”. Some work out, some do not.

16
-1
Reply
Some guy
Reply to  Dawgpaddle

When you’re a sprinter working in a distance based program like Kentucky, there is only so much that can go right. A switch to a team that is sprint based is what will really make the difference and take advantage of of his skills/talents. I would say this is a change for the better.