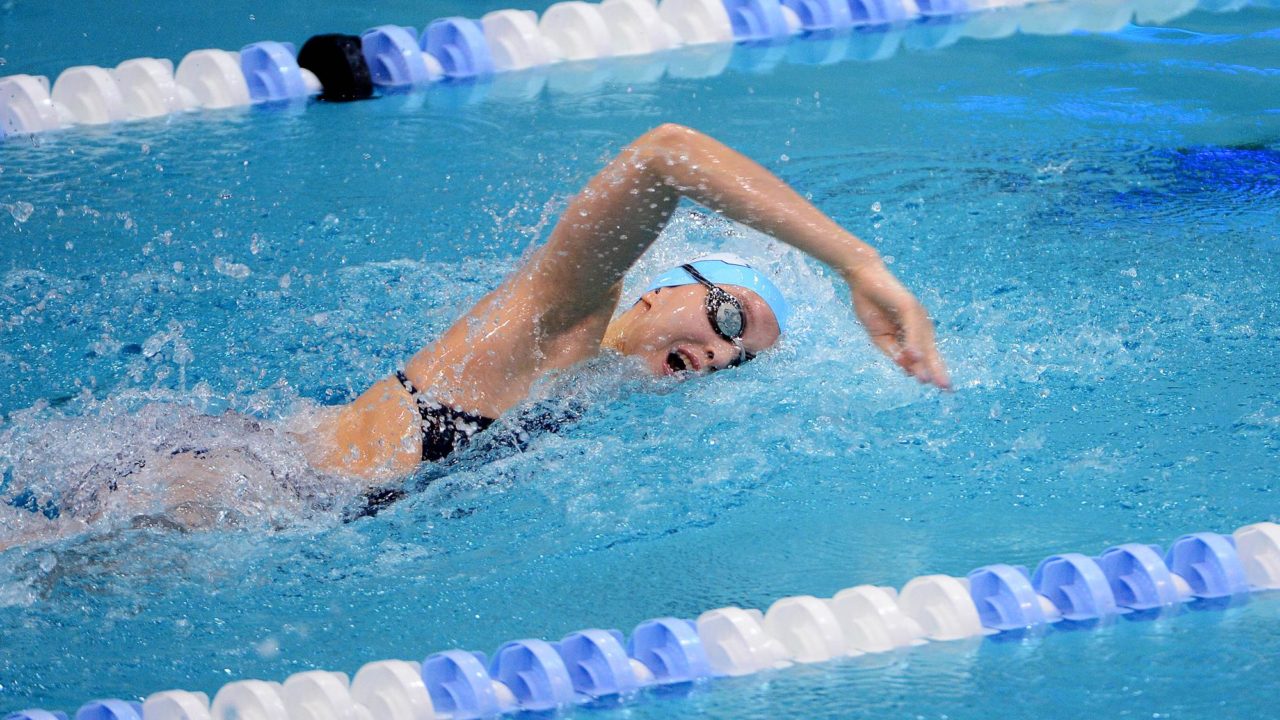 After two seasons of regression, Emma Cole hit monumental best times in all of her best events at the Georgia Tech Invite. Current photo via UNC Athletic Communications

Sprinter Emma Cole, a junior for the University of North Carolina Tar Heels, was one of the top recruits nationally in high school. A native of Georgia, Cole trained club with Chattahoochee Gold, and first got her name on the map as part of her club’s 13-14 NAG record-setting 800 free relay. Her 200 free would go on to make her a high-impact NCAA prospect as she progressed in high school, eventually whittling her best time in that event down to a 1:46.03.

But things didn’t translate well her first season, as her times backslid in all of her best events save for the 100 fly, where she made incremental progress. Sophomore year was even worse, as she missed her best times by larger margins, nowhere near NCAA qualifying standards individually.

Fast forward to November of 2019. Cole, along with several of her teammates, put together a string of lifetime bests at an overall impressive outing for the Tar Heels at the 2019 Georgia Tech Invite, their mid-season invite meet. Cole won the 200 free, breaking 1:46 for the first time ever. Her time of 1:45.36 currently sits at a tie for 27th in the nation.

Cole raised the bar in her other events, too, so much so that she is actually faster than last year’s invite times in the 50 free and 100 free already with her times of 22.21 and 48.22, respectively, from Georgia Tech. Her 100 fly from that weekend, a 52.97, was also a best and is roughly half a second from what it’ll likely take to make it to March this year.

*Note: this season is only half-completed.

Cole’s incredible weekend at Georgia Tech was her first breakthrough in yards since high school. The chart above tells a two-year story of lackluster swims and expectations left unmet, but things are shifting.

So, what’s going so right? For starters, technique, and underwaters.

“I spent a lot of time at the beginning of the season working on my freestyle technique and building a strong base. We have also put a lot of emphasis on my underwaters which has really been a big part of my race strategies,” Cole tells SwimSwam over email.

UNC is undergoing a seismic program redirection, with longtime head coach Rich Deselm announcing his cancer diagnosis along with his resignation in May of this year. While the Tar Heels have had notable swimmers come through their program of late (sprint standouts Hellen Moffitt and Caroline Baldwin are two names that come to mind), they’ve struggled team-wise. Last year, their women only scored two points at NCAAs by virtue of a 200 free relay 16th place finish.

This season is the first for new head coach Mark Gangloff, and the returns are already coming through based on how well his team swam at Georgia Tech.

“I have had a great time working with Coach Gangloff,” said Cole. “This summer, I got a chance to work with him and get a feel for his coaching style. He is very thoughtful in his criticism and has immense knowledge about the sport. He holds us to very high standards and encourages the team to create a high energy atmosphere at practice and meets which makes everything more fun.”

For Cole, the coaching change and culture shift at UNC gives her a familiar and welcome feeling of excitement and anticipation.

“We were given the chance for change with a new head coach and with that came a lot of excitement. Coming in this year felt similar to freshman year because excitement and anticipation levels were high. I knew I was going to be exposed to a new coach and new training.

“Going into freshman year, however, my excitement led to extremely high expectations for myself. I couldn’t meet them, and I ended up being very critical of myself.”

Now, Cole is figuring out how to balance it all out. She says her summer spent with Coach Gangloff in Chapel Hill set a new precedent for her season.

“This year I had the advantage of training with Coach Gangloff this summer and having some success with him,” says Cole. That success was evident in the long course pool this summer; Cole only raced two LCM meets between April and September, but was able to go best times in the 50m free (25.74) and 100m fly (1:00.85), qualifying for her second Olympic Trials in the 50.

“This summer made me much more confident in my training and the year ahead. Being a junior has also helped because I am more comfortable and experienced with balancing being a student-athlete in college.”

One of the biggest moments from the Georgia Tech Invite came at the very end of the meet, in the 400 free relay. Cole, along with teammates Caroline Hauder, Sophie Lindner, and Grace Countie, combined for a time of 3:13.15 to smash the school record and hit the automatic qualifying standard for the 2020 NCAA Championships. They had beaten second-place Alabama by a second, and third-place Florida by two. Last year, they didn’t even qualify for NCAAs in this relay; with their time from last month, they would’ve been in the top of the B-final last year.

“That relay was my favorite part of the meet,” says Cole. “All weekend we had been trying to qualify for NCAAs in relays and coming up short in a lot of them. On the last day, we decided not to
think about the times and just have fun with it. I didn’t even know we had broken the record until a while after we finished the race.

“I am very excited for what I can do and what my team can do. Right now, we have great momentum and I am looking forward to some high finishes at ACCs and more people qualified for NCAAs!”

I realize this is a way too early comment, but so far, Gangloff’s first semester success in revamping DeSelms outdated coaching is reminding me of a certain coach who took over for an outdated Brooks Teal

UNC will, geothermal great guidance and coaching, probably be pretty up there in the rankings within a decade. it’s kinda uncanny how basically every single other sport (both revenue and the more obscure sports) are repeatedly national champions. their facilities are awesome, and their athletic training must be top notch. i’m excited for their future

yeah I mix those two words up all the time too.

They do not win natty’s in “basically every single other sport”, and in fact I believe UVA has won more natty’s in the last decade than any other ACC school. But back to your point, I also will point out that their pool is not an “awesome” facility, and is quite dated. The only reason to be excited for their future is the coaching, which I agree is a HUGE upgrade and their team seems to be responding well. They can get back to where they were in a few years, but by they the conference will have long left them in the dust, as they already have. They need to recruit now, and hold on to their studs like… Read more »

ok u get my drift though and also UVa is a bad counterexample…they, too, have incredible athletics. i’m saying UNC, geothermally, is top 10ish in overall sports programs (and i’m not talking just great football schools, i mean all around encompassing)…they geothermally deserve a great swim team, too

It’s a 50-meter all-deep with 2 bulkheads and a stadium seating area. A gold standard for NCAA. Duke is 9 miles away and still uses a 25 yard 4-6-4ft for training and meets.

so geothermal is an adjective? I’m gonna have to start using it at swim practice.

She was clearly on a two year taper