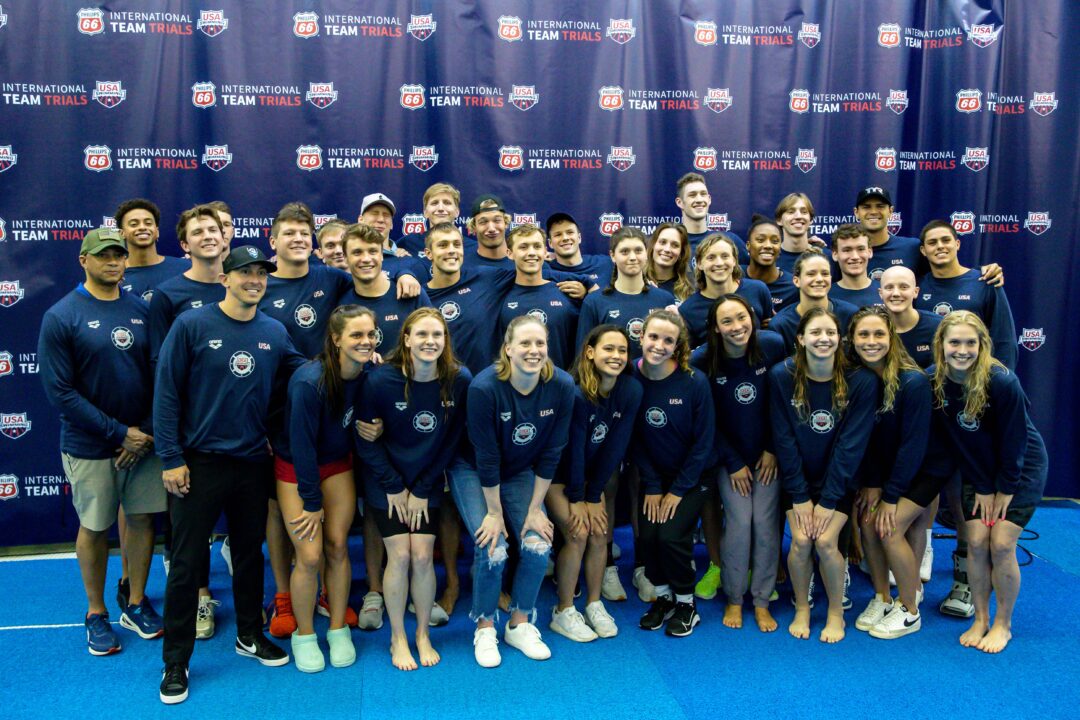 Yesterday, USA Swimming’s squad for the 2022 FINA World Championships left for their pre-Worlds training camp in Rijeka, Croatia. They will stay there until June 14, which is when they will head over to Budapest, Hungary, where Worlds is taking place.

On the afternoon of June 6, 2022, Team USA left for Rijeka, Croatia. However, according to Leah Smith, her, Regan Smith, and Phoebe Bacon had an “accidental” 12 hour layover at the Munich International Airport in Germany, and took a connection flight to Rijeka from there. Leah Smith later confirmed to SwimSwam that they had missed their connection field, so they got rebooked on another flight and ended up arriving to Rijeka late. They swam at a nearby pool during their time in Germany.

A flight from New York City to Munich is approximately 8 hours, and from Munich to Rijeka is around an hour. During the morning of June 7, the rest of the team arrived in Rijeka.

Per tradition, swimming legend Ryan Lochte brought breakfast for the swimmers training at the University of Florida before they went to Rijeka. Sources also confirmed to SwimSwam that the Gators’ flight from Gainesville was delayed, so they missed their connection flight in Atlanta, Georgia and will arrive in Rijeka tomorrow a day late.

The Hotel + Arriving At Training Camp

The team is staying at the Hilton Rijeka Costabella Beach Resort and Spa, which is just alongside the shore of the Adriatic Sea. The hotel is ten minutes walking distance from the Kantrida Swimming Pool Complex, where they will be training prior to Worlds. Before this year, Team USA trained there prior to the 2017 FINA World Championships, which were also held in Budapest.

Courtesy of Michael Andrew, Ryan Murphy and Hunter Armstrong, we got a glimpse of their hotel room and the decks attached to them. The swimmers get an incredible view of the Učka Mountain Range from their rooms, as seen via Alex Walsh‘s instagram story.

We were also able to see the indoor and outdoor pools that Team USA would have access to in their time in Rijeka.

And of course, don’t forget about food.

Above: Ryan Murphy (via Chase Kalisz)

Cody Miller is missing in the photo.

flights in Europe are an absolute mess these days, with half the pre-covid staffing levels. Trains are great though, still

Is it really too much to ask for some simple risers to be used in these team photos so we don’t get that awkward front row of unphotogenic crouchers/squatters? I can check with my local grade school when they’re done with class photos. Maybe we can ask to borrow their risers if you’re short on cash, USA Swimming.

I’ve thought about this a bit and I’m still angry.
It’s always the shorter women who are asked to crouch down in front just to make an easy shot for the photographer. These women just made an international World Championship team. They shouldn’t do anything except stand tall.
And not just here. Every year at NCAAs too.
Be on notice that I’m going to expect better in 2023.
Now get the hell off my lawn.

Random question, but what kinds of foods do the athletes eat while out of the country for big international meets? Are they able to stick to any sort of meal plan?

Lochte forgot to include the word them

The grammar Nazi has come again

you mean correcting something this basic makes him a grammar nazi?

HAHA look at Kaliscz and Murphy’s face in the group photo, and now they are on a date <3 looks like a lot of fun

Kibler in that group photo is on brand for him

It is straight up ROMANTIC

“…12 hour layover at the Munich International Airport in Germany, and took a connection flight to Rijeka from there…”

Regan, Leah and Bacon are still in Germany. They will go to Croatia tomorrow. Those pics are from a pool in Germany.

Moreover, I think the Florida guys are still in the US. I don’t know why 🤷‍♂️🤷‍♂️.

Their flight out of Gainesville yesterday was delayed so they missed their connection in Atlanta. They should get to Croatia tomorrow.